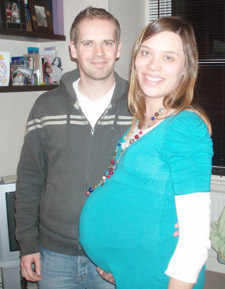 New dads - did you cry when your baby was born and have you been feeling irritable and stressed? It may be all down to your hormones.

Research has already established that fathers-to-be may experience pregnancy symptoms ranging from food cravings and nausea to a swollen stomach and 'labour' pains.

But now Dr Arthur Brennan of Kingston University and St George's, University of London, is trying to establish whether these symptoms are produced by the kind of hormonal changes experienced by their pregnant partners. He believes that men's 'sympathy pregnancies' may be caused by raised levels of the hormone prolactin, which is more usually found in breast-feeding mothers. Prolactin lowers levels of testosterone, bringing out men's 'softer', emotional side and may account for behaviour such as dads who cry when their child is born. "It seems fathers may be just as much a victim of their hormones as their pregnant partners," said Dr Brennan, a senior lecturer in the universities' Faculty of Health and Social Care Sciences.

In an experiment for BBC 4 programme, The Biology of Dads, being screened this week, new father Michel Gouvin had his levels of prolactin monitored after the birth of his daughter Matilde. As he cradled Matilde, his levels of prolactin rose by 20 per cent in 15 minutes. Michel had also experienced nausea, weight gain and cravings for stodgy food during his wife's pregnancy.

Dr Brennan, who helped conduct the experiment and features in the BBC4 programme, said: "I believe that men who experience pregnancy symptoms may be undergoing normal hormonal changes that help them prepare for fatherhood. At present it's seen as a psychosomatic disorder but I would like to determine whether there is a physiological basis for their symptoms.

"Very little work has been done in this area so I would like to address this dearth of research by looking at changes in the levels of prolactin, testosterone, oestrogen and the stress hormone, cortisol, in expectant and new fathers."

He said that higher levels of cortisol would help men feel closer to their unborn or newborn baby but may also make them more tearful and emotional. "I would expect that men's anxiety about their baby, their partner and their role as a parent, especially if they are first time fathers, would lead to higher levels of hormones, especially cortisol," he said.

Dr Brennan helped to establish the existence of the phenomenon known as 'Couvade syndrome' from the French verb to brood or hatch when he carried out a study of 282 fathers-to-be whose partners attended St George's Hospital in South West London. The expectant fathers, aged 19-55, were compared with a control group of 281 men whose partners were not pregnant.

Another man said he thought he was in greater pain than his partner when she was in labour. "Her contractions were fairly strong but she couldn't push and as that was happening my stomach pain was building up and up and getting worse and worse."

One man said: "I had an unstoppable craving for chicken kormas and poppadoms. Even in the early hours of the morning I would get up and prepare myself one."

The research, completed in 2008, found that most of the men's symptoms disappeared after their partners gave birth. Eleven of the men were so concerned about their symptoms that they went to see their GP but no physical problems were found, even after tests.

"There is no medical diagnosis of Couvade syndrome but it is very real and very distressing for the men that experience it. It should receive greater attention from health care professionals; all too often men feel they are marginalised during the anti-natal period," he said.

Dr Brennan, a father of two grown-up children, did not experience Couvade syndrome himself. Trained as a general nurse, he began his research after he heard anecdotal evidence about men's 'sympathy pregnancies' while working in a mother and baby unit at the Bethlem Royal and Maudsley hospitals in London.

Further information: 'The Biology of Dads' was shown on BBC4 on Tuesday 22 June at 9pm.