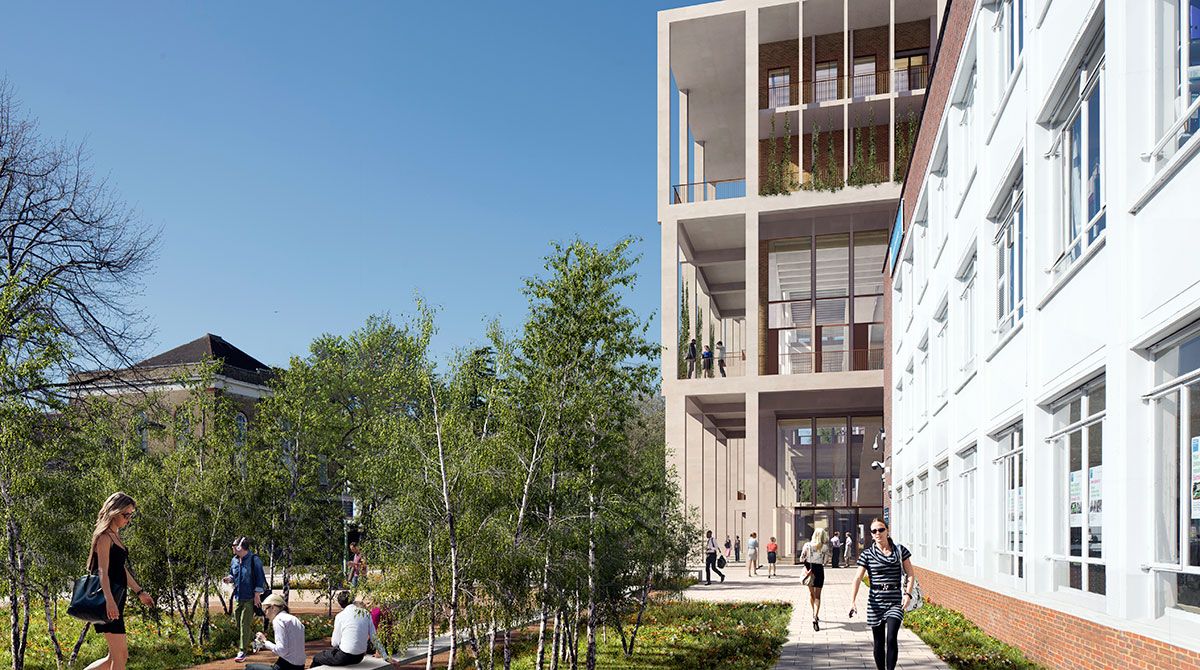 Grafton Architects, designers of the new Town House building, hope it will bring the local community in to the University.

Kingston University's new landmark building will be a focal point for both the University and the town, according to its designers. Shelley McNamara and Ger Carty – from award-winning Grafton Architects – described their vision for the new Town House at a recent lecture held at the University's Jacqueline Wilson Hall. Alongside the new Town House building, the newly refurbished hall forms part of a £260 million transformation project being undertaken by the University during the next 10 years to upgrade facilities and enhance the teaching and learning experience.

Grafton was appointed to design the new Town House building in 2014 following a RIBA (Royal Institute of British Architects) design competition. Ms McNamara and Mr Carty took the audience of staff, students and local community organisations on a journey from their initial concepts, through refinements made during the design and planning processes and on to the final designs for the building.

The Town House, which is due to open in 2019, will include a library, dance performance area and covered courtyard for events. It would bring the community right in to the heart of the University and help forge even stronger connections with local people, Ms McNamara explained. "One of the most exciting elements of this project was being asked to find ways to bring the public on campus," she said. "The Kingston University brief was a very progressive vision for education engagement."

Acting Vice-Chancellor Professor Steven Spier, who introduced the speakers from Grafton, is an expert in contemporary architecture. He told the audience that Grafton's appointment was an example of the pioneering ways of working the University was championing. "An open RIBA design competition is considered to be the gold standard method of hiring architects," he explained. "It sets a standard for how we should be doing things. We need to build an environment suitable for a 21st Century university." 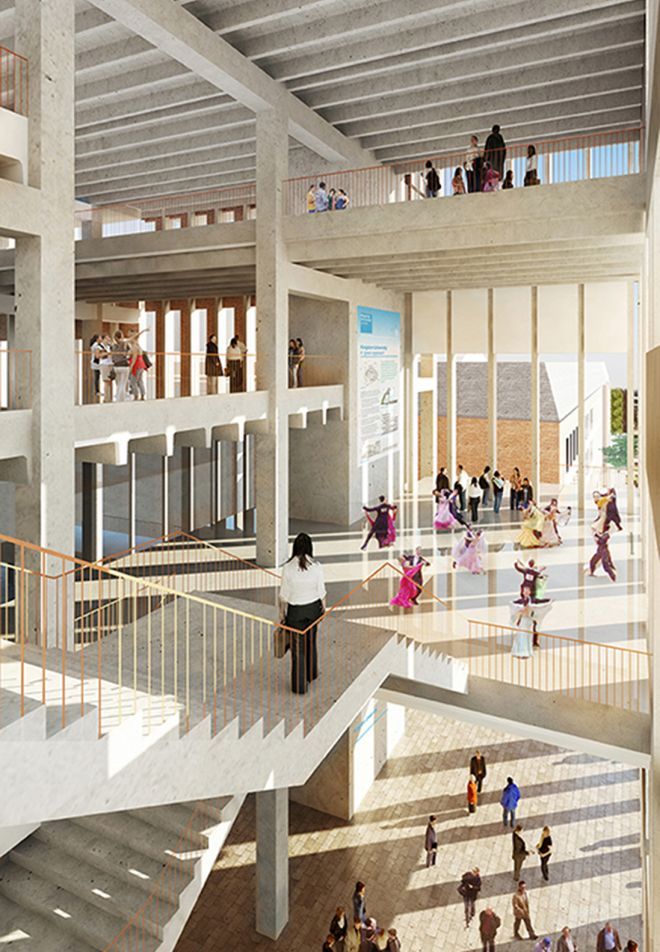 An artist's impression showcases the open plan design of the new Town House.Ms McNamara said the project could be summed up by the term ‘the learning landscape'. "This is a pertinent description as universities are not just places for consuming knowledge, they are also about its protection and discovery," she said. "To start with, we were like detectives trying to identify clues, or chefs finding new ingredients. The question we asked ourselves was, ‘how can we create a space where students can discover learning for themselves?"

This notion of space and, in particular, combining indoor and outdoor space was a theme running through the talk. Ger Carty explained that the Grafton team was interested in finding ways to marry landscape with architecture. "The activities inside a building influence those outside of it and vice versa," he said. "We were keen to bring the outside in – especially as more than 50 per cent of the new Town House building is open space."

The top two floors of the building would be quiet areas, Ms McNamara added, with a garden on the roof providing views across the river and towards Hampton Court Palace. "We're working with Dermot Foley Landscape Architects to help create new types of ecologies and encourage wildlife habitats within the green areas," she said.

Accommodating different uses in the building had been an interesting challenge as the Town House would be a place for many paths to cross, she admitted. "We had to think about how to allow for the sound made by exuberant dance students alongside the varying requirements of a learning resources centre," she said. "The main part of the library is on the open second floor with areas that can be closed off for project spaces. People will be able to move up through the balconies and gardens in the building and there will be a visual connection between all floors."

The location of the building in terms of a civic presence had been a key factor for them as architects, Mr Carty said. The University feeds in to the life of the town so they had wanted to design the building in sympathy with this. "When we were considering what it would be made of, for example, we thought about County Hall's Portland stone, the Hampton Court palace windows and the materials used at the Royal Borough of Kingston's Guildhall building," he added.

The pair said that when looking for inspiration they had reflected on a number of contrasting buildings – from the 15th Century Ospedale Maggiore in Milan, Dublin City library and the University of Engineering in Lima to a furniture warehouse in Copenhagen and the John Lewis building in Kingston town centre. "We were looking at how light, shade and temperature make you feel in a building," Ms McNamara said. "We didn't want to be too prescriptive as the space has to be flexible and we wanted to leave room to let life and spirit in."

In addition to a colonnade and foyer there will be a covered courtyard for lectures and performances. "We agreed that this didn't need to be a closed box and instead could be the accessible heart of the building," she said. "We've designed it with Shakespearean theatre in mind so the audiences hopefully won't just be viewing the performances, they'll have a sense that they're participating in them." There will also be wide staircases weaving their way round the building connecting different levels and providing further opportunities for social interaction.

"The challenge was to design a building which everyone would feel was theirs - it's exciting to think we could be bringing together a dancer, a historian or even a passer-by on the street," Ms McNamara concluded. "Kingston University has been a fantastic client and we want to continue to work together to give staff, students and the local community the amazing building they deserve." 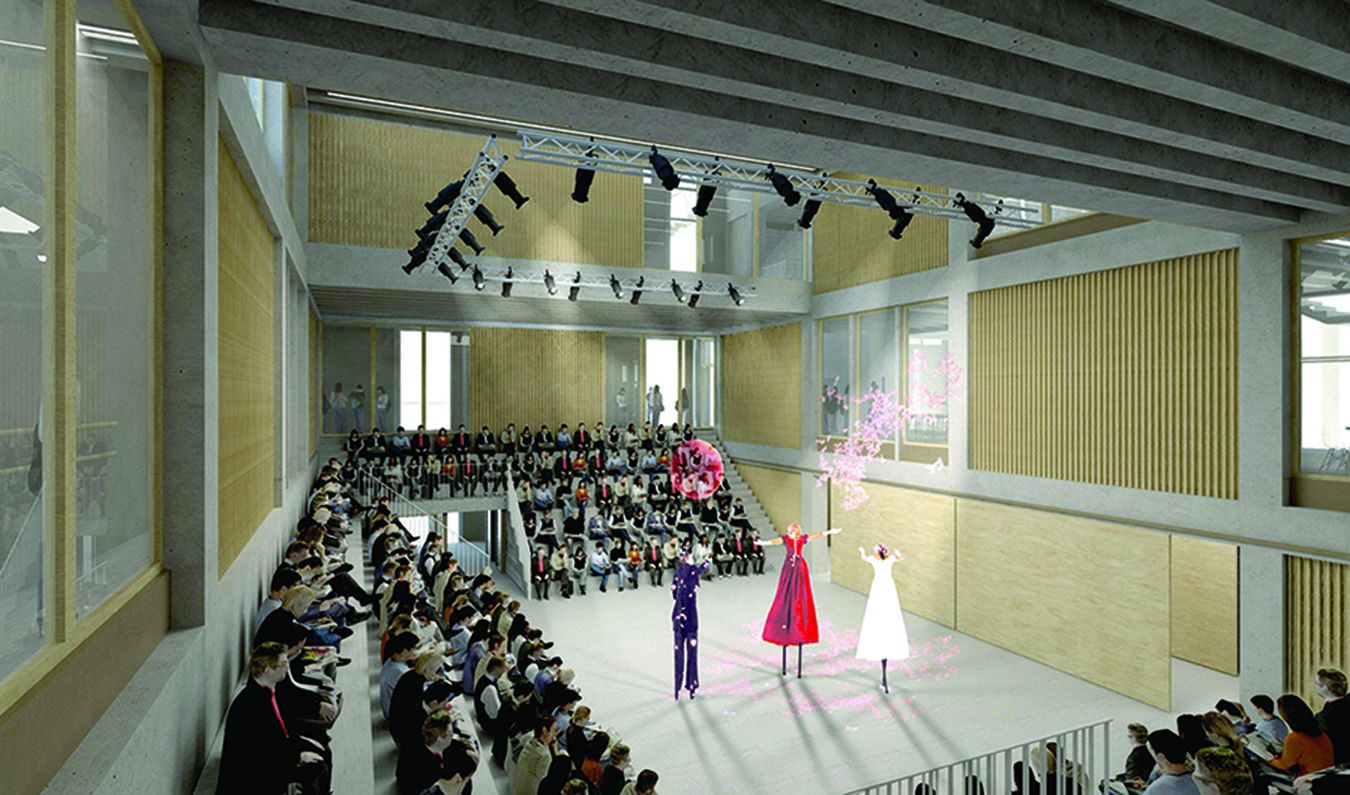 A covered courtyard will provide space for lectures and performances within the new Town House building designed by Grafton Architects.