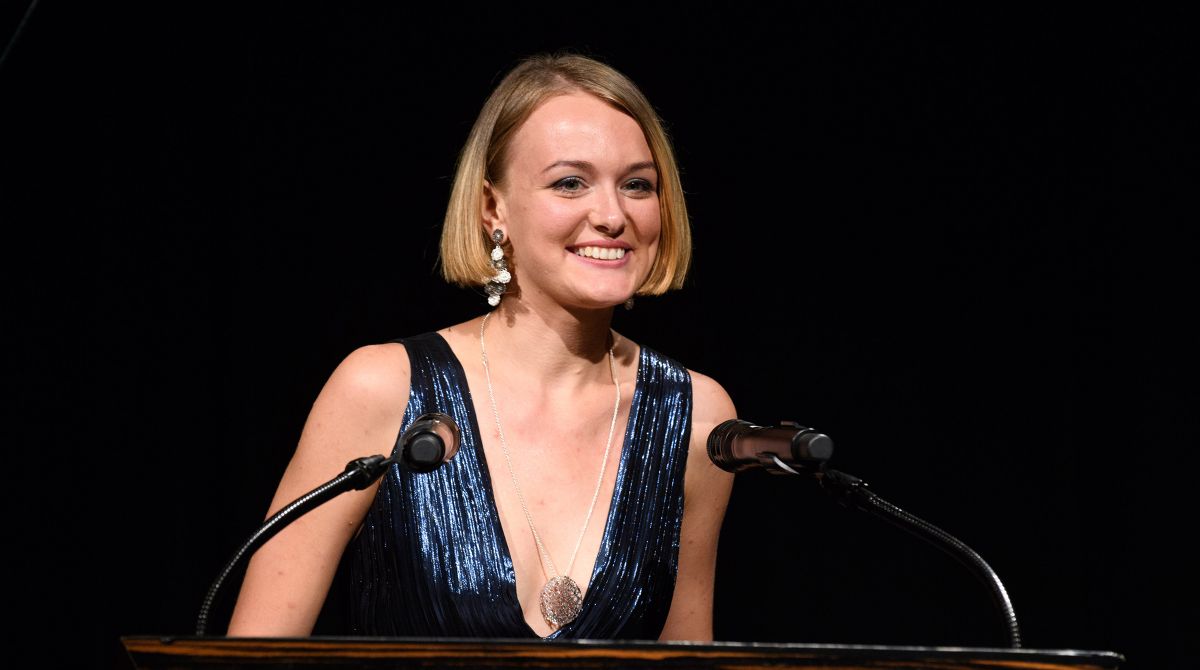 Former Kingston University student Alicja Jasina has stepped in to the limelight after winning a gold medal in the animated film category of the 43rd Student Academy Awards. The 26 year old, who graduated from Kingston University in 2013 with a BA (Hons) degree in Illustration Animation, won the coveted prize for her ‘Once upon a line' animation, fighting off competition from other student film-makers from across the globe.

The Academy established the student Oscars in 1972 to support and encourage budding university filmmakers and the competition is judged by a panel of high-profile industry professionals. Alicja's film was one of a record-breaking 1,749 entries for the awards this year from students attending 381 schools around the world. 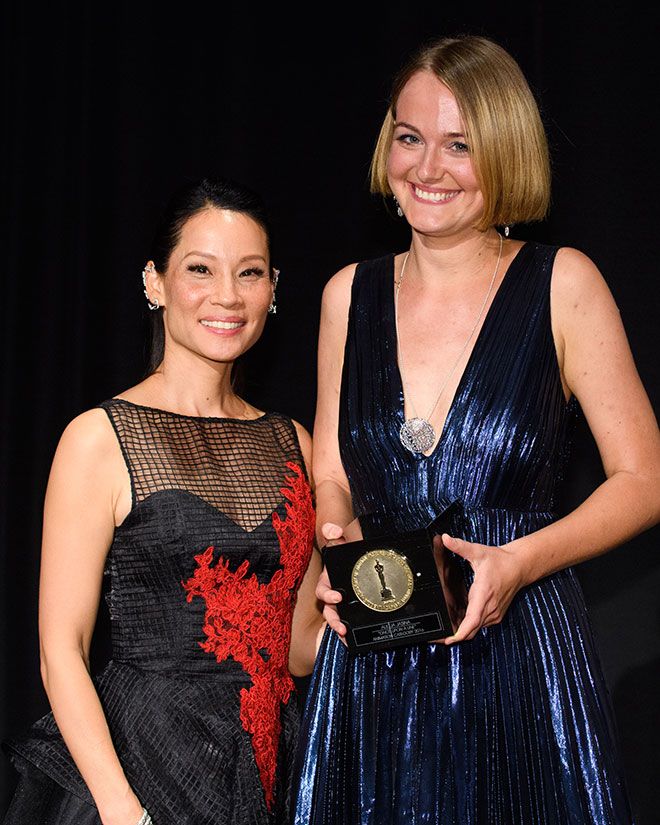 Alicja Jasina's gold medal award was presented to her by actress Lucy Liu. Image: Todd Wawrychuk/©A.M.P.A.S.Actress Lucy Liu, who presented the medals in the animated film category, praised the winners' visual creativity and imaginative storytelling. "Although they exist only as drawings and pixels in the hands of these talented artists, the characters become as real as anything in the physical world," she observed.

This is just the latest achievement for Alicja who also scooped the prestigious Royal Television Society Award in 2014 for her short film and Kingston University graduation piece, ‘The Light Bulb.' Her new award-winning film, ‘Once upon a line' is about finding one's own way and achieving independence, something which Alicja said she'd been supported with during her undergraduate days. "You are definitely ready for industry when you graduate from Kingston University," she explained "My lecturers taught me how to think, helping me to be a concept-driven film-maker."

Alicja's seven-minute animation - which she produced as part of her MA at the University of South California - tells the story of a man who is living a monotonous life, never deviating from the norm until one day he falls in love and discovers that there is another line to walk - one that is full of colour and hope.

Unlike many students who put technique ahead of content, Alicja said she had placed storytelling at the forefront of her work and had focused on representing her message in a novel way. "The narrative itself isn't particularly revolutionary," she admitted. "I think what appealed to the panel, though, was the way I created a visual language using a line to represent the story.

"Kingston University senior lecturer Martina Bramkamp said she was proud that Alicja's talent had been recognised at this very high level. "One of the main goals on the BA illustration animation is to develop the individual strengths of our students so that they are industry-ready to perform as visual artists and communicators in the 21st century," she said. "When she was studying with us Alicja focused on ways to engage an audience through animated story-telling and she is a great example of a designer who doesn't shy away from asking direct questions and pushing boundaries."

Alicja was awarded the top prize in the animated film category at a lavish ceremony held at the Samuel Goldwyn Theatre in Beverly Hills. "I'm thrilled that films, like mine, which won gold medals are seen by an international audience," she said. "Making these key contacts in the very heart of the industry will hopefully give me a real edge in my future career."

As a Student Academy Award winner, Alicja was eligible to be nominated for the 89th Academy Awards and her gold medal win put her in prime position to pitch herself against the best in the industry for the most recognised trophy in the world - the Oscar - and compiled and submitted her application for the Oscars' animated short film category.

The Academy of Motion Picture Arts and Sciences announced on 23 November that of the 69 pictures that originally qualified in the category, ten animated short films will advance in the voting process for the 89th Academy Awards, one of which was ‘Once upon a Line.' She found out on 24 January, 2017 that she had not been nominated for the 89th Oscars, but has used the opportunity to raise her profile and is now freelancing in Los Angeles. 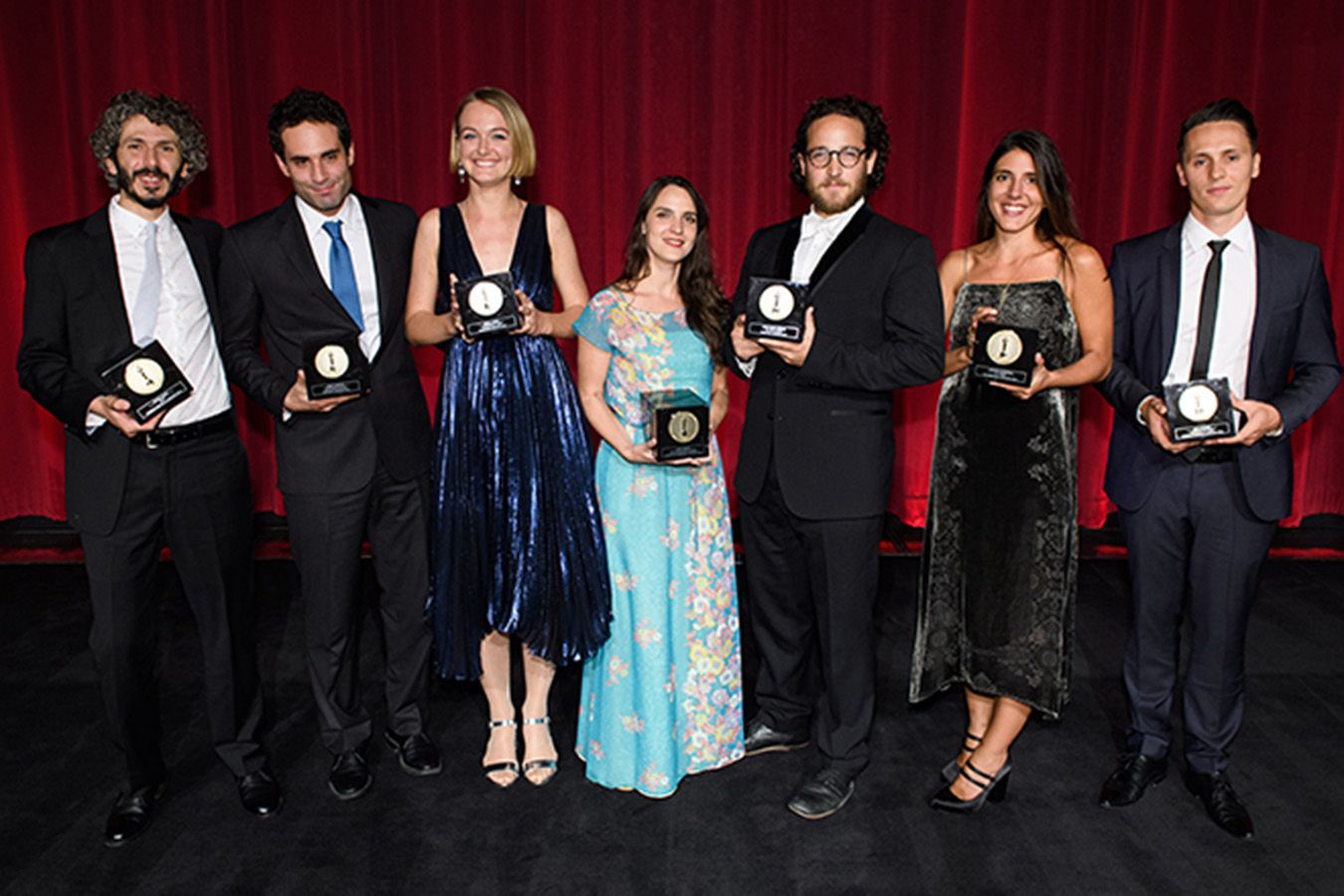