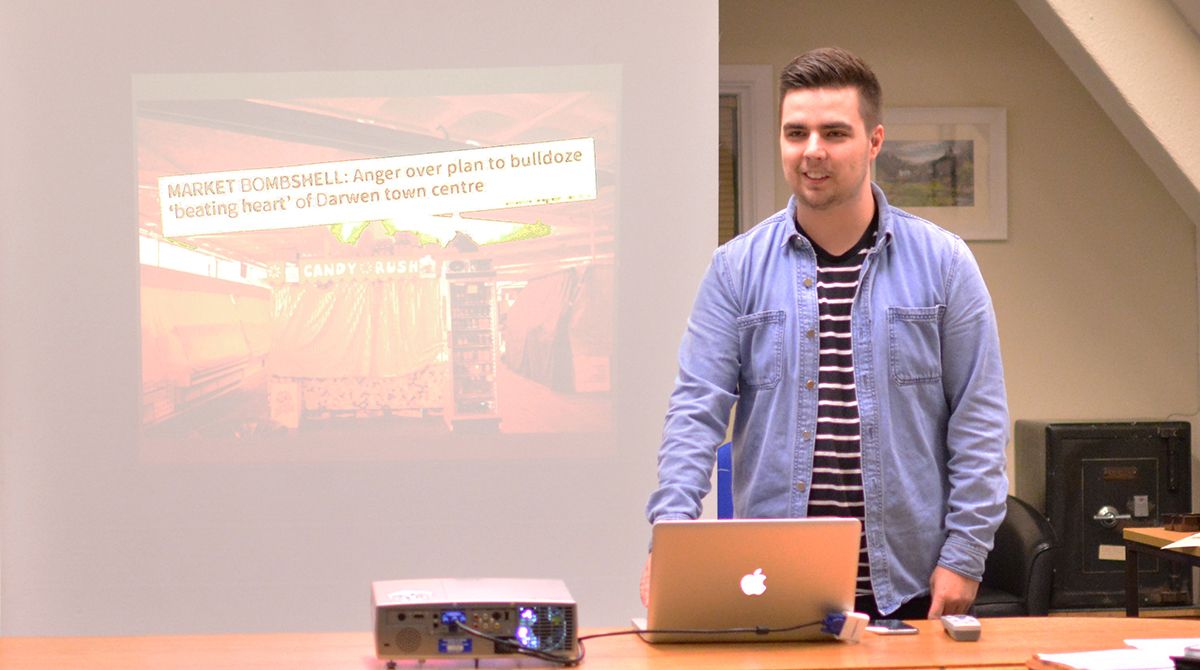 Many people return home for the holidays to see family and friends, but for one Kingston University student, a Christmas trip turned into the start of a major campaign to re-design part of his home town.

Graphic design student Liam Dargan put his creative talents to the test to encourage people in his hometown of Darwen, Lancashire to have their say on the town's marketplace. His work has led to a prestigious gold award for creating the ‘Heart of Darwen' brand, designed to get his local community involved in the campaign.

Liam's campaign was kick-started after he returned home for the Christmas holidays last year and discovered the town hall's three-day markets were struggling to attract local footfall, putting the building at risk of closure. "Darwen itself has changed greatly over the years but the marketplace has failed to keep up," he said. "The space has barely improved since I was little and it isn't really appealing to anyone my age, or even my parents' age anymore." 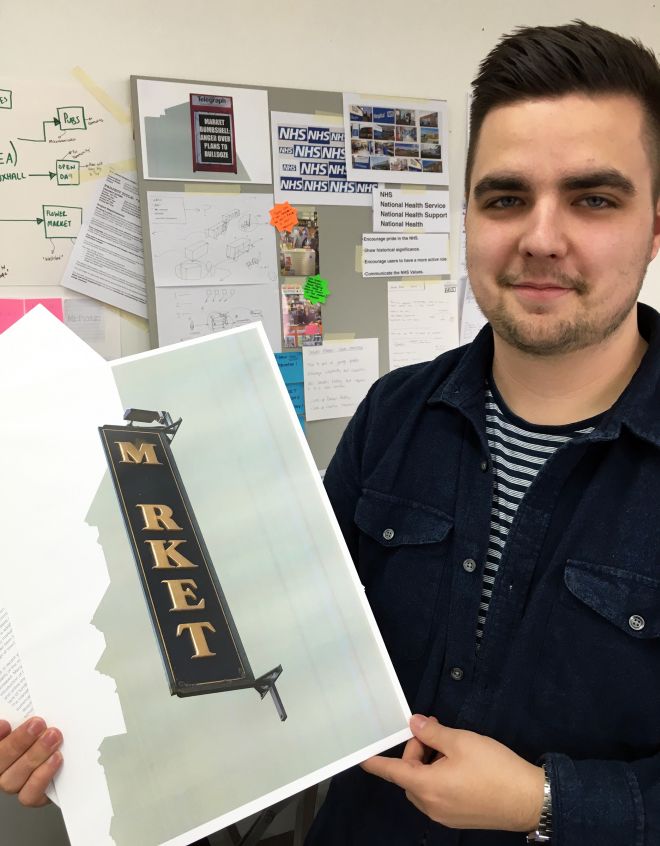 Graphic design student Liam Dargan won gold at the Creative Conscious Awards for his work with the Darwen community.The 21-year-old embarked on a mission to help re-vitalise the market space and trawled the stalls with a camera and notebook, interviewing traders and visitors to get an insider's view on what needed to be done to reinvigorate the hall. His vision began to take shape after a local newspaper ran an article reporting that Blackburn with Darwen Council planned to demolish the building. "I collated my ideas and presented them to the Darwen Town Centre Partnership, a committee made up of council members and local business people in charge of the consultation," Liam explained. "They brought me on board and I created the Heart of Darwen brand to provide a platform for ideas from the community."

Since launching the brand website as a forum to exchange ideas, Liam has run workshops alongside the board with local businesses, collated hand-written and online feedback and has even involved local schools in the consultation about the marketplace. "Two of the three high schools in Darwen have now moved into the town centre, so nearly 2,000 young people are studying metres away from the market which could be very good for business," Liam explained. "The schools also specialise in entrepreneurship so it's been a big focus of ours to encourage pupils to have their say on their new surroundings."

Liam's project won gold at the Creative Conscience awards, which encourage and reward graduates across the design spectrum for developing projects that improve communities. The accolade only strengthened the momentum behind his work. "It was encouraging to know that I was making waves, not just in Darwen but with industry experts across the country," he said. 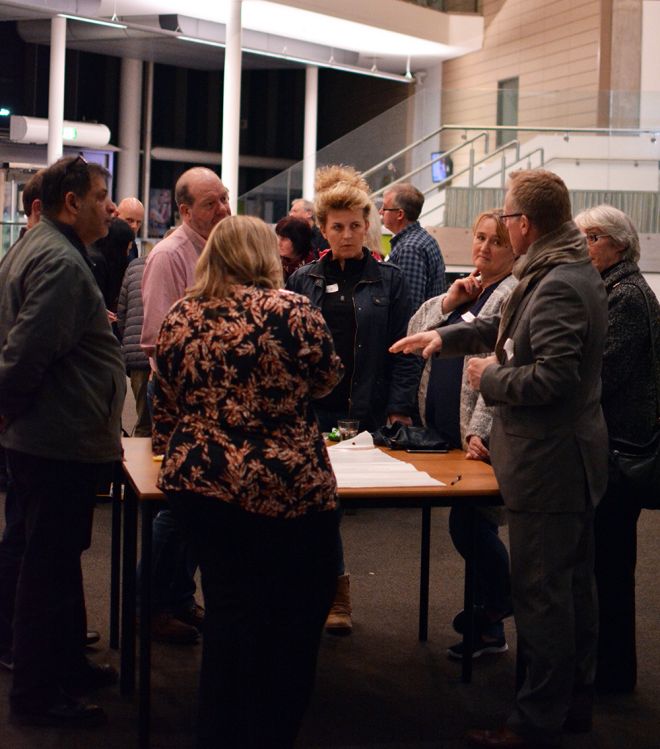 The Darwen community submitted a range of ideas for the marketplace refurbishment to Liam's Heart of Darwen website."Being at Kingston University and being so close to London, you are constantly surrounded by innovative design and during my three years studying, I have seen how design can make things better and have a positive social impact, so it's really important to me that this project works for Darwen."

Darwen Town Centre Partnership Board member Samantha Taylor continues to be impressed by Liam's understanding of the town's needs. "He's become invaluable to the board through the campaign," she said. "He has enabled us to bring the consultation to life and engage with different age groups across various platforms."

With the three-day market building facing demolition, many Darwen traders have begun to relocate to the six-day Victorian marketplace or elsewhere in the town centre. Since graduating this year, Liam has continued to interview the traders on their move and to encourage community involvement in the project. "The local council will make an announcement soon about how they're replacing the three-day market and I'll be working closely with them to make sure the replacement is something that adds to the community," he said. "All of the feedback we've had suggests the space needs to be more appealing to people of all ages and council has taken on these ideas."

Graphic design senior lecturer Kieran O'Connor heralded Liam's mature approach to the Heart of Darwen project. "Using his creativity to help stakeholders and the community get involved in big decisions and truly own their ideas for the town really showcases Liam as an emerging entrepreneur," he said.

"We all live with design decisions made by others on our behalf in our everyday lives - it makes me feel optimistic to witness creativity letting us in on those decisions and even empowering us to make them ourselves." 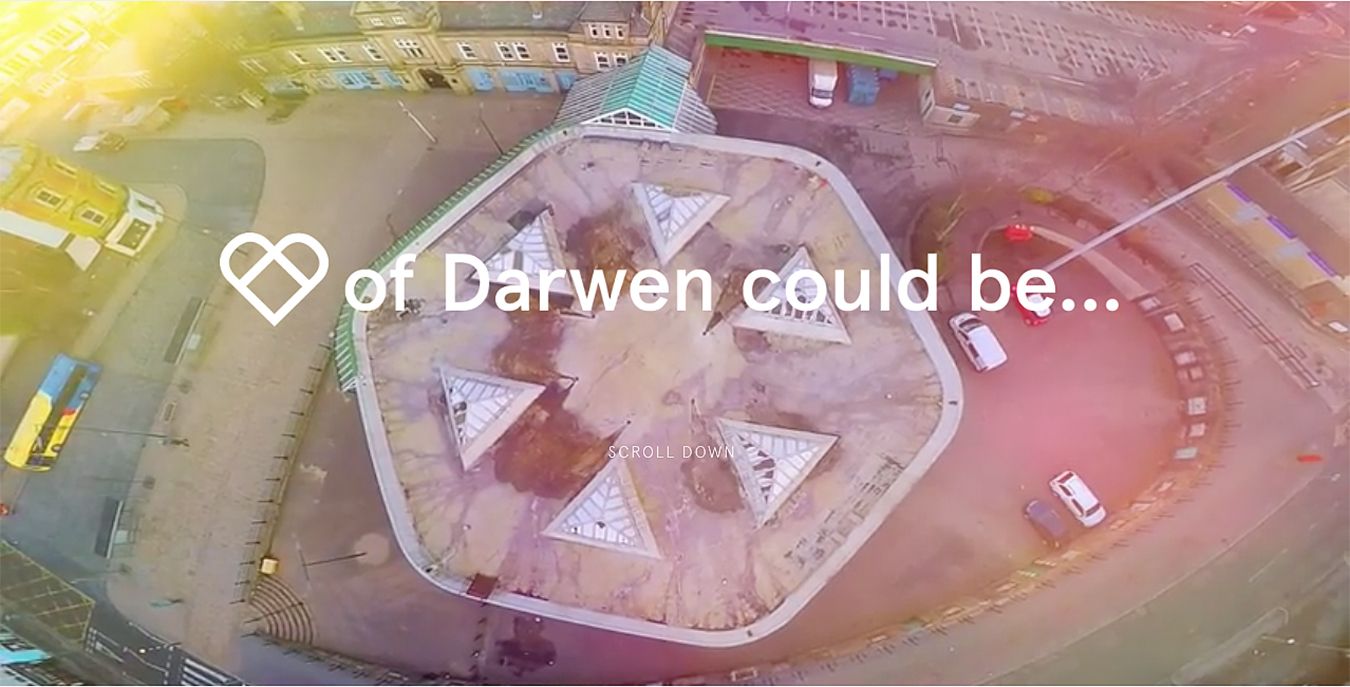