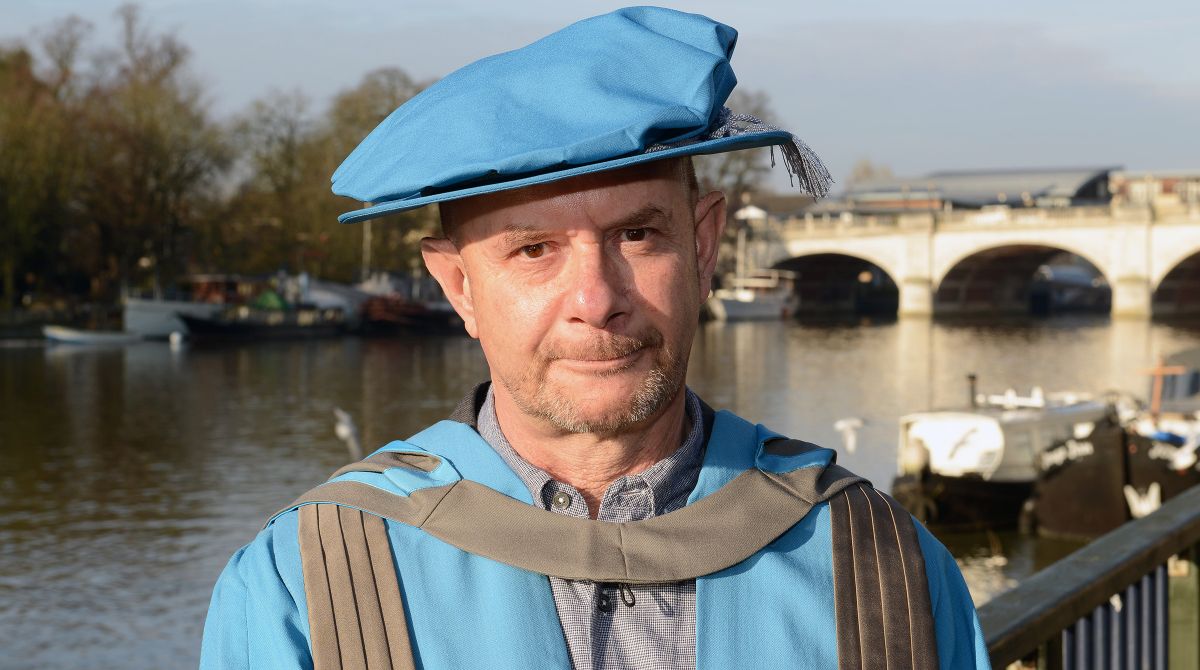 Not being afraid to take risks and embracing the value of wrong turns along the way were two of the life lessons shared by acclaimed novelist Nick Hornby as he was awarded an honorary degree from Kingston University.

The Oscar-nominated screenwriter – who studied for his Postgraduate Certificate in Education (PGCE) at the University after reading English at Cambridge – was named an Honorary Doctor of Arts in recognition of his outstanding contribution to literature and reading pleasure during a Faculty of Arts and Social Sciences graduation ceremony at the borough's Rose Theatre.

Reflecting on his journey from teacher and freelance journalist to award-winning novelist and in-demand screenwriter, the 59-year-old father-of-three spoke of the twists and turns his own career had taken. He went on to urge graduands to be prepared to work hard to achieve their goals and encouraged them to learn from all the life experiences they encounter on the way.

"When I left teaching I knew I wanted to write but I didn't know what that meant," he said. "I thought I should get a qualification as a journalist, but didn't get the place that I applied for. Then I started doing my own writing – lots and lots of it – and was rejected over and over again for years until my first book was published, at which point I became an ‘overnight success'," he quipped.

Detailing how his time at Cambridge spent thinking about football and music went into his first two hit books, Fever Pitch and High Fidelity, Hornby also told how experiences from his short teaching career had formed the basis of his critically-acclaimed novel About a Boy. "If I had succeeded at any of those other things I tried to do I would not have had the career that came as consequence and this is a career that feels like me," he said. "When I look back now, I wasn't failing, I was learning." 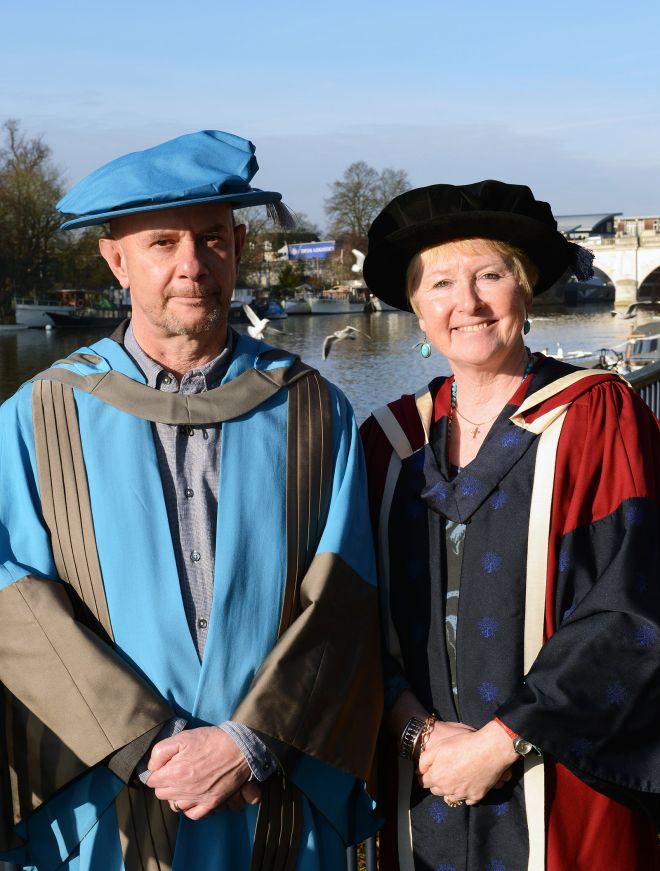 Author Nick Hornby with Kingston University Associate Professor Alison Baverstock.Hornby's coming-of-age novel About a Boy was chosen for the inaugural Big Read project at Kingston University. The shared-reading initiative saw all new undergraduate and postgraduate students receive a special edition copy of the book, while the author visited the University to discuss its themes with students and staff as part of the link-up.

"It's always interesting to meet readers, I value the opportunity when it comes along," he said. "Kingston University has changed beyond recognition since I studied there, but one thing I really felt when coming back was the sense of ambition and inclusivity, which I think is reflected in schemes like the Big Read."

Having authored a string of best-selling novels, Hornby has gone on to develop a successful career as a screenwriter, receiving Academy Award nominations for his work on the films An Education and Brooklyn. "Once you're established as a screenwriter people come to you with opportunities, which is different to writing novels, where it's down to you finding the time to write one," he said. "I like switching between projects and working with colleagues, which is something you can do a lot more with screenwriting than sitting on your own writing a book for two years."

After being presented with his honorary degree, the author and avid Arsenal FC fan – who was born in Redhill, Surrey, and now lives in north London – spoke of his pride at being invited back to the University to be presented with the award. "It's always nice to be recognised for your work - particularly, in this case, for your body of work, rather than anything specific," he explained. "It adds to the sense that what you have achieved might be of value. Whatever branch of the arts you are in, it takes time to become established and you have to follow your gut, have confidence in yourself and be driven to succeed – talent is only half of it."

Associate Professor Alison Baverstock, a publishing expert who co-founded the MA Publishing course at Kingston University and spearheaded the Big Read project, said the renowned author had made a huge contribution to the field of literature and had inspired many people to take up reading for pleasure. "Nick's books – and their film adaptations – are known around the world and have encouraged many self-confessed non-readers to get started on wider reading and, as a result, feel more connected with others," she said.

"About a Boy was the perfect choice for our first Kingston University Big Read and we are very proud that one of our own graduates has made such a significant contribution towards helping the current generation of students here feel welcome and integrated within their university." 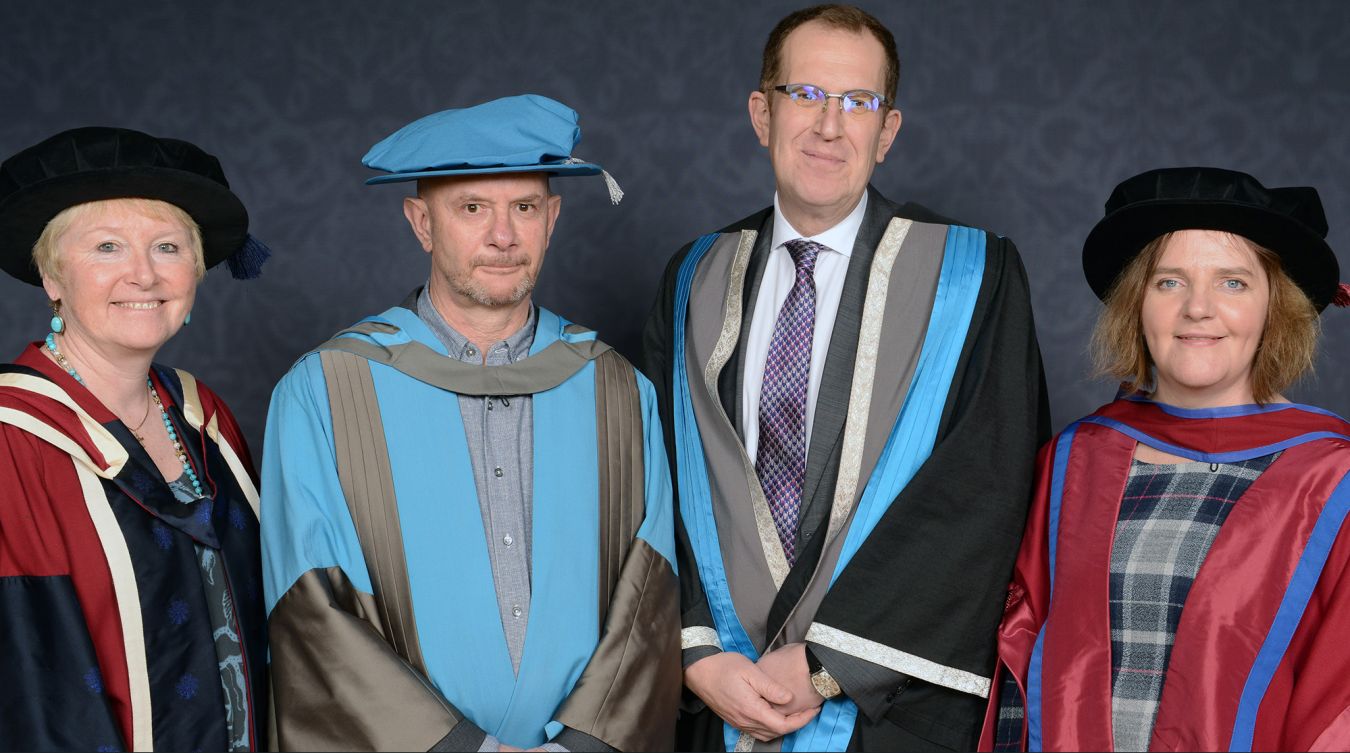