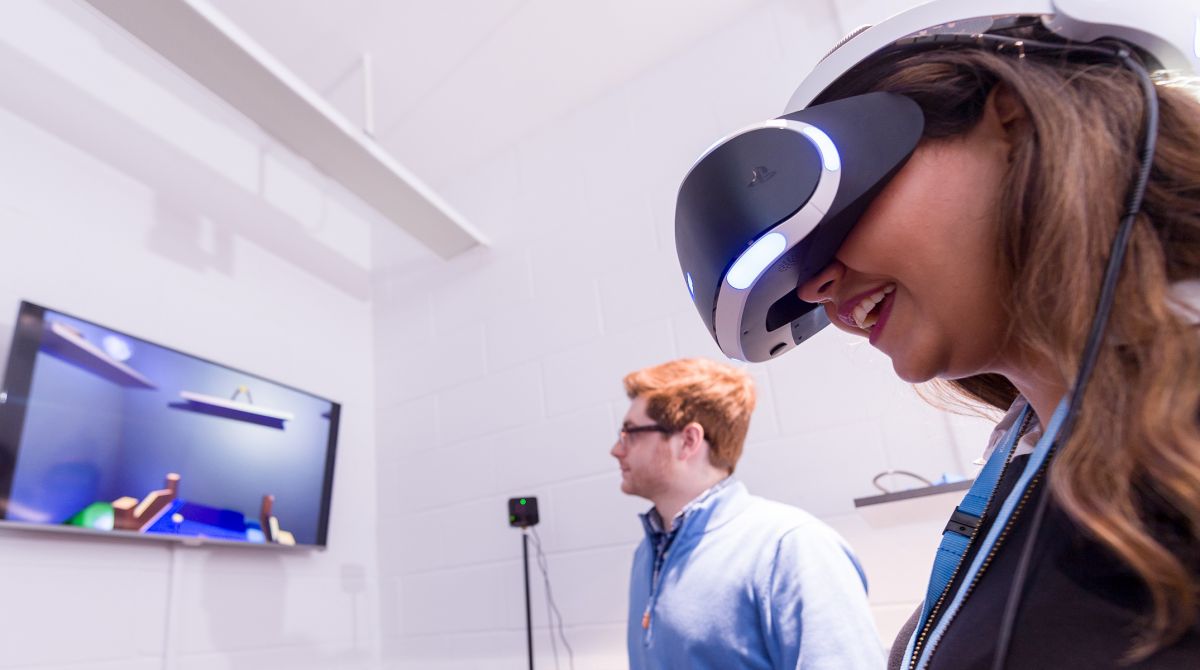 Kingston University is set to play an integral part in shaping tomorrow's gaming geniuses with the opening of a state-of-the-art facility that will give its computer science students a perfect platform to launch their industry careers.

The University has invested £53,000 to create the Centre for Augmented and Virtual Reality Environments - more familiarly known as the CAVE - at Penrhyn Road campus. It gives students access to a treasure trove of equipment such as virtual reality headsets that can transport the wearer into an immersive alternative environment and equipment that tracks eye movements and brain activity to monitor how much someone is enjoying playing a game.

The CAVE, which complements the University's newly-redesigned games lab, creates a cutting edge working space where undergraduate, postgraduate and research students from a variety of courses can collaborate. Professor Vesna Brujic-Okretic, head of the School of Computer Science and Mathematics, said this way of working would help prepare students for the industry. "We are breaking the mould with this high-spec, collaborative learning environment," Professor Brujic-Okretic said.

"Having games programming students working with design students on various aspects of a project is exactly how the digital media industry works - it's that level of inter-disciplinary work and the exchange of views that will broaden the horizons of each and every one of them and help make sure they are industry-ready," she added. 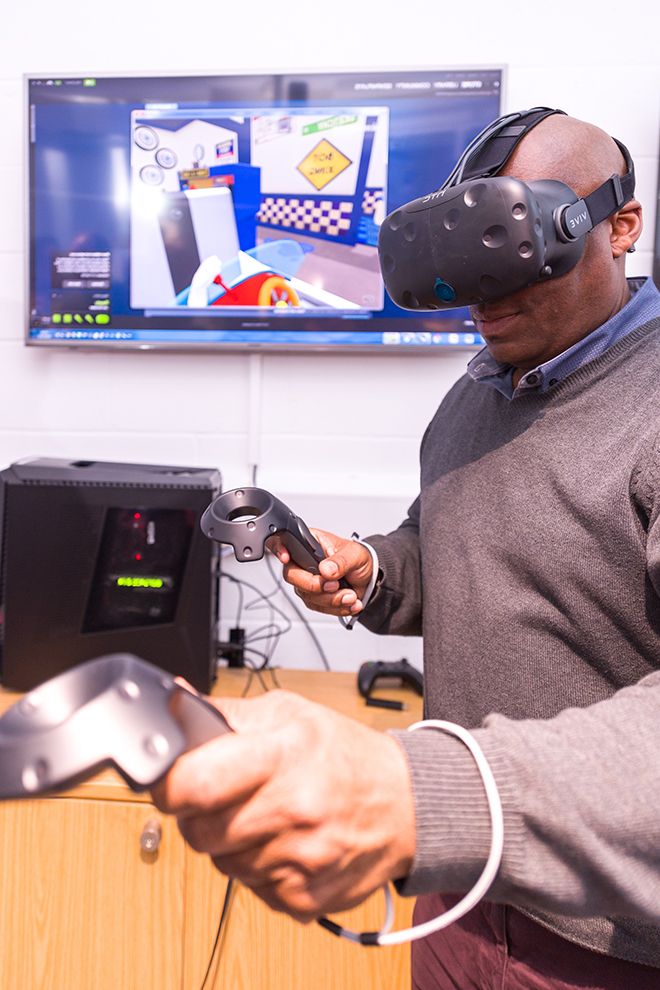 Inter-disciplinary working by computer science students helps prepare them for the industryProfessor Brujic-Okretic said the University was rapidly developing its augmented reality and virtual reality facilities to keep pace with advances in the digital media industry. Alongside its high-end equipment, the University also became one of 12 in the country to secure an educational partnership with Sony last year, giving students access to the company's latest gaming platforms to develop their work on - as well as to a range of projects that could help boost their employment prospects.

One student who has benefited from this partnership is Luke Parlin, who graduated from the Games Development (Design) MA in January. The course recently obtained full accreditation by BCS - The Chartered Institute for IT - along with the University's Cyber Security and Computer Forensics with Business BSc(Hons) and the Master's in Health Information Management courses.

Luke and course mate Zack Bloundele successfully pitched an idea for a virtual reality game to Sony, which is currently being developed. Luke said inter-disciplinary working and access to cutting edge technology at the University equipped him well for becoming a games entrepreneur. "It's hugely inter-disciplinary - there are always students to collaborate with and people we might not otherwise have access to," he said.

Luke was involved in the set-up of the CAVE and said the technology available to students sets it apart from other universities. "The technology is at the forefront of games design and development and for students to have access to that is amazing - it's a major professional advantage and very few universities have these kinds of facilities."

"Virtual reality is making enormous leaps as it's developed by the games industry, but the technology itself extends beyond gaming. It's going to be huge in terms of museums and exhibitions, socialisation, as well as medical technology, and for Kingston University to be at the cutting edge is exceptional," he added.

Professor Brujic-Okretic agreed that virtual reality and augmented reality extended beyond games - a prime example of which is a two-year PhD project at the University, being led by associate professor Vasileios Argyriou, that is using virtual reality devices to test the cognitive ability of patients with early on-set Alzheimer's.

There are also plans for students from across the university - such as those on art, design and animation courses - to collaborate with computer science students so they can utilise virtual reality in their work.

Dr Lucy Jones, Vice-Dean of the Faculty of Science, Engineering and Computing, said: "We are very excited about the opportunities that the CAVE will offer for our staff and students. The launch showed how interested everybody was in the technology and how it could be used to significantly enhance research and teaching." 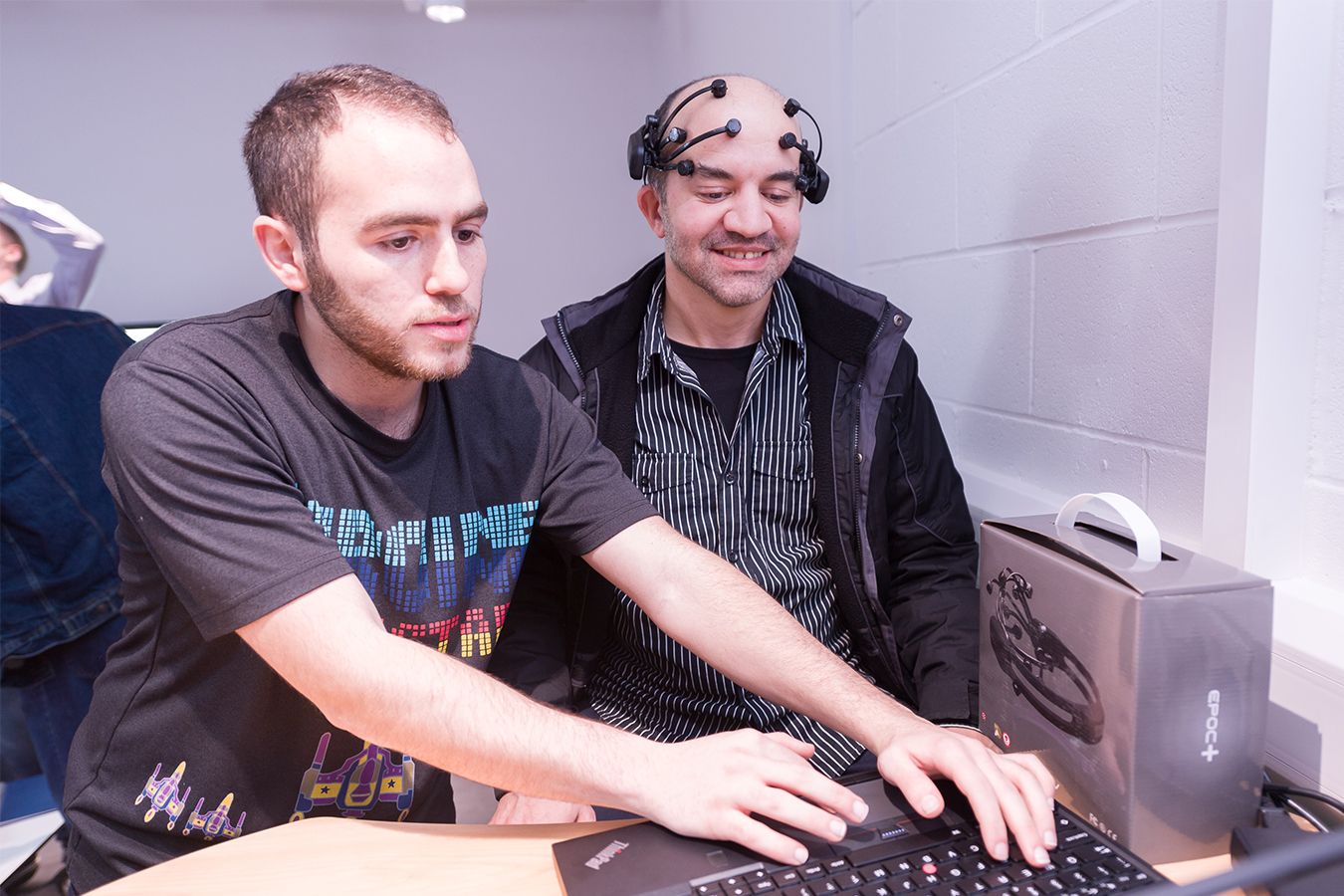