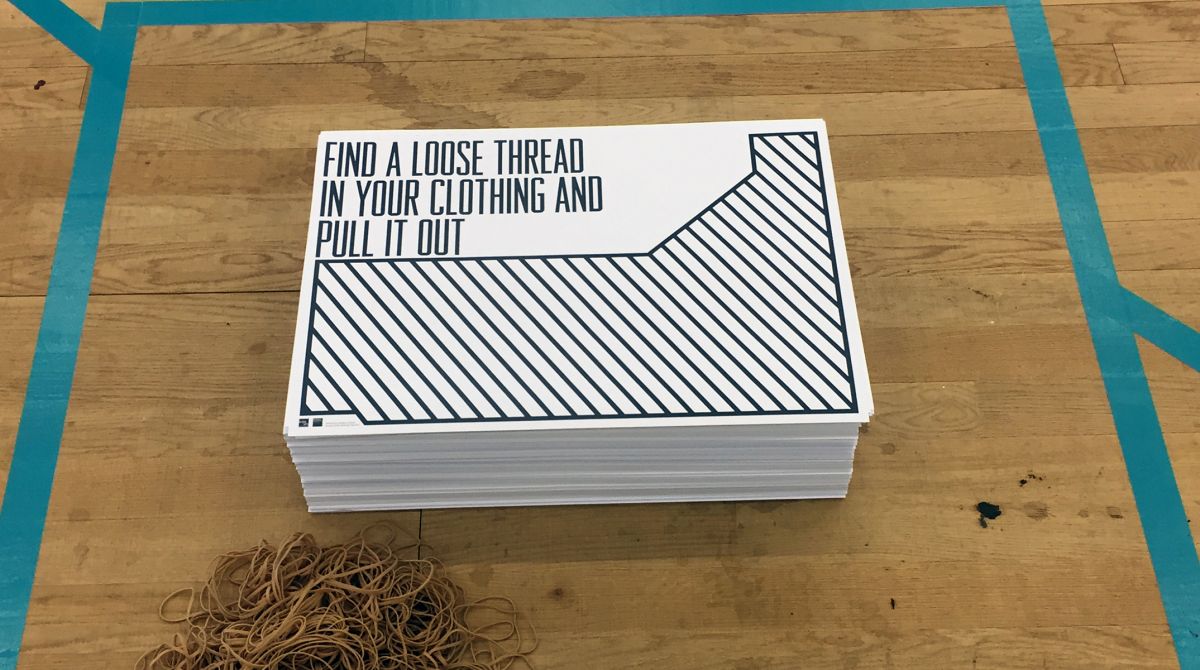 How do you turn an instruction into art? This was the challenge set to 10 of Kingston University's fine art students as part of No Working Title - a research project which saw one student complete a gruelling crawl through the Tate gallery and another strive to create the perfect cup of tea, all in the name of art.

The aim of the project, which launched at Tate's new building on London's Southbank, was to examine how artists play with and reinterpret rules. The event was the first since Kingston University became a Tate Exchange Associate and was part of the Tate Late series, attracting more than 1,500 people to see the students' work and hear guest speakers including Tate Curator Ann Coxon and author David Gauntlett. Tate Exchange is an ambitious ‘open experiment' which allows other organisations and members of the public to participate in Tate's creative process, running events and projects on site and using art as a way of addressing wider issues in the world around us.

In total 40 students from four universities took part in the 2017 iteration with Kingston University joined by Bath Spa University, Norwich University of the Arts and Winchester School of Art. Each student was partnered with a fellow participant from a different university to ensure the instructions were anonymous. These directions were used, with the guidance of their supervisors, to create pieces of art with the pairs meeting for the first time at Tate Exchange, to reveal the results of their work.

Second year Kingston University student Srijana Gurung, received a simple instruction from her partner - to crawl. With an interest in public performance she sensed the opportunity to use the project as a way to push herself to the limit. "I'm interested in giving up control, breaking boundaries and challenging myself," she said. Her preparations included a trial run at Waterloo train station during which she was approached by concerned commuters, wondering what she was doing crawling along the concourse.

The 20 year old from Ashford in Kent wanted to immerse herself totally in the project, both mentally and physically. Her final crawl took her from the ground floor of Tate Exchange up to the fifth floor via the lift and an arduous climb up the imposing stone staircase. "I quite like putting myself through pain for my art. The thrill and the physical suffering makes me more attached to the work, there is more emotion and I don't feel distanced from the piece," she said.

No Working Title is orchestrated by Kingston University's Fine Art BA(Hons) course leader, Jo Addison and Natasha Kidd, from Bath School of Art. The project began in 2009 as a platform for their research and to examine the role of the artist as author. Taking inspiration from artists such as 1960s collective Fluxus - including a pre-Beatles Yoko Ono - Brian Eno's Oblique Strategies and American conceptual artist Sol Lewitt, the No Working Title founders decided to research how instruction-based art practices could inform new ways for students to work together.

Jo Addison said the project was an amazing experience for students, allowing them to explore new ways of creating. "Within each partnership there is the giving and taking of control and the giving and taking of ownership", she explained "but we're also collaborating as a large group looking at questions the study raises". Collaboration is a theme that runs through No Working Title and mirrors the way artists exist in the modern world. "People have a romantic image of an artist sat in a garret working on their own. That's not a very realistic impression, nowadays you have to build networks to survive as an artist," she said. 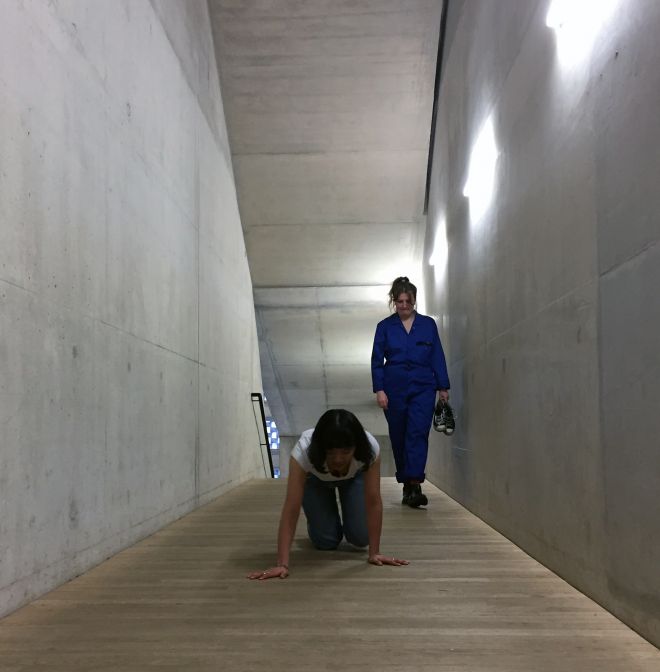 Kingston University fine art student Srijana Gurung performs a crawl through the Tate gallery as part of No Working TitleSecond year student Anna Smallman, from Pembrokeshire in Wales, was interested in the project after encountering difficulty following rules. "Towards the end of secondary school I started to try to find alternative ways to do the tasks I was set and challenge some of the accompanying rules," the 22 year old said. "When the project came up I saw it as an opportunity to see if I could receive instructions I could bend and shape to my own vision."

Part of Anna's instruction was to make the perfect cup of tea and transport it to Tate in time for the day's proceedings. She was asked to complete the task in a medium of her choice. This enabled her to play with the instruction and led to a meeting with a clairvoyant. "I bought a cup and saucer from a local antiques shop and was hoping the medium would be able to tell me a bit about its history," she said. Anna carried the cup of tea from Kingston upon Thames on the train, displaying it in the Tate while wearing a hat made up of teabags so that she could be recognised by her partner.

Both Anna and Srijana felt that they had benefitted from their involvement in the project. Anna found that she can work under instruction, as long as she had the freedom to re-frame the context. "Rules can help my creative process, as long as I have a bit of leeway to riddle my way in to a more interesting area that suits my process." For Srijana, No Working Title helped her to discover how she can best present her work to the world once she has graduated. "It made me realise that my work thrives outside of galleries, it needs to be free of traditional art environs," she said.

No Working Title is part of a larger piece of research looking at how art education is being implemented across the country in universities, colleges, secondary and primary schools. Addison believes that it is important to allow pupils of all ages to explore artistic endeavour. "From primary school to higher education important questions need to be asked about how art is taught. Currently, in many schools, teachers have very little space to implement art in its own right, without justification through other more valued parts of the curriculum. We've got an economy that has profited enormously from our cultural heritage. If we cut it off at the roots we'll lose the artists of the future." 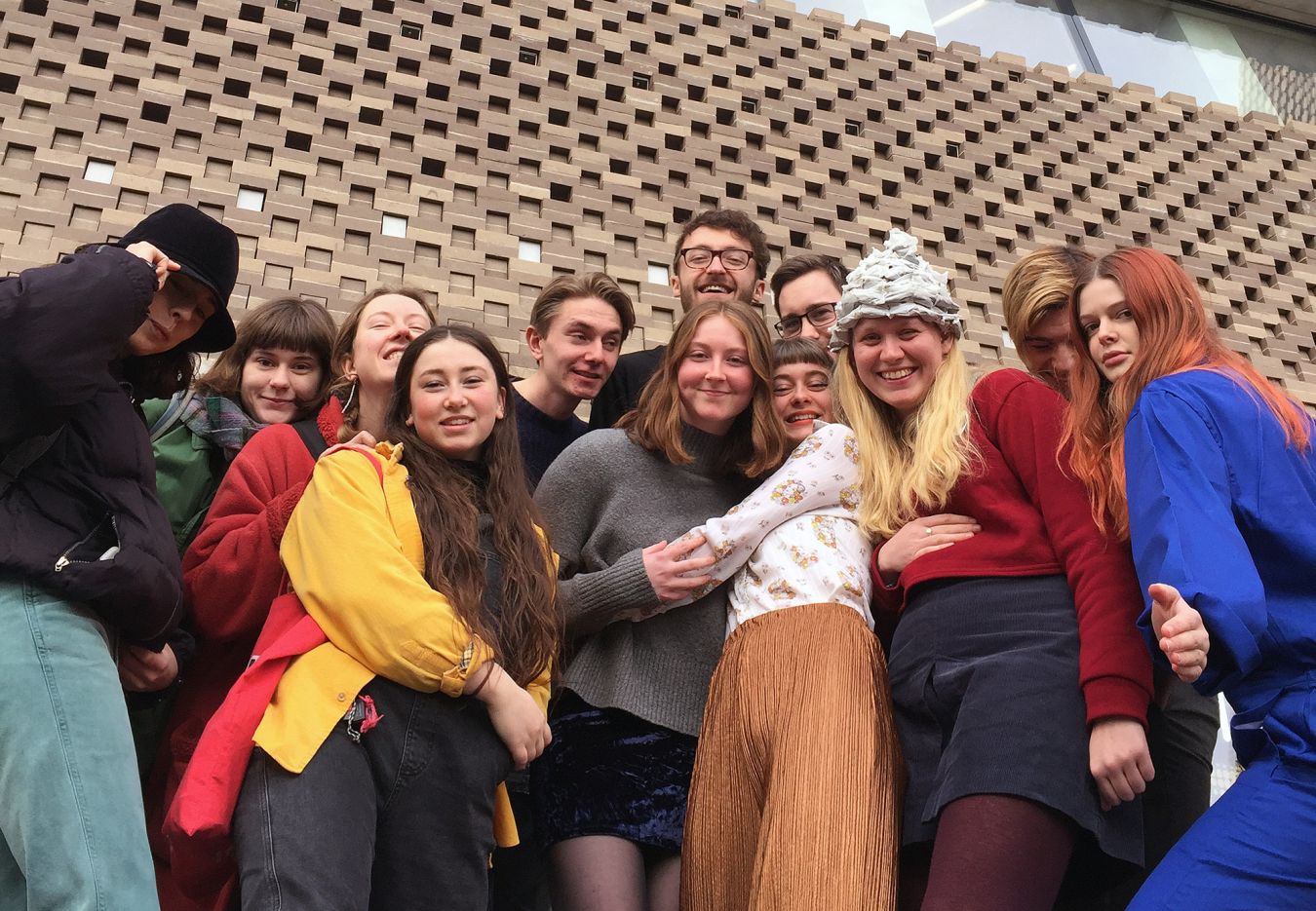