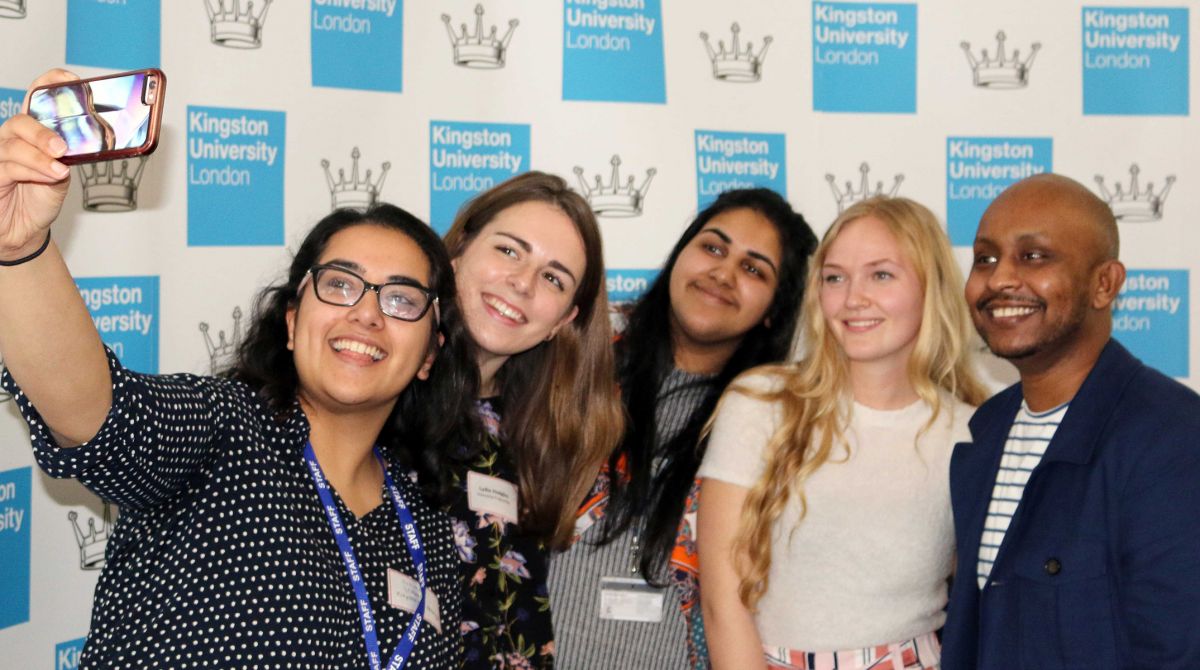 Humanities student Ashleigh Osborne (second from right) with Farah Mohammoud (far right) from social enterprise You Press and members of the University's work placement team at the Santander Universities event.

High profile internships in small and medium-sized enterprises (SMEs) and prestigious international work experiences were just some of the projects recognised at a recent event to celebrate successful Kingston University initiatives supported by banking giant, Santander.

Kingston University has been a partner of Santander Universities Division – which manages Santander's long-term strategic alliance with higher education – since 2012. During the past five years, the scheme has provided more than £350,000 of funding for Kingston University programmes, scholarships and internships benefiting thousands of students, staff and members of the surrounding community.

Guests who gathered at the University's Kingston Hill campus were given a flavour of the diverse activities that have been implemented since the partnership was launched. Acting Vice-Chancellor Professor Steven Spier, who opened the event, praised Santander for the support it had provided to the University. "We thank Santander on behalf of those who have benefited from the generosity and indeed, the longevity and ambition of the programme, which allows students to test their learning and challenge themselves through the experience of being abroad," he said. 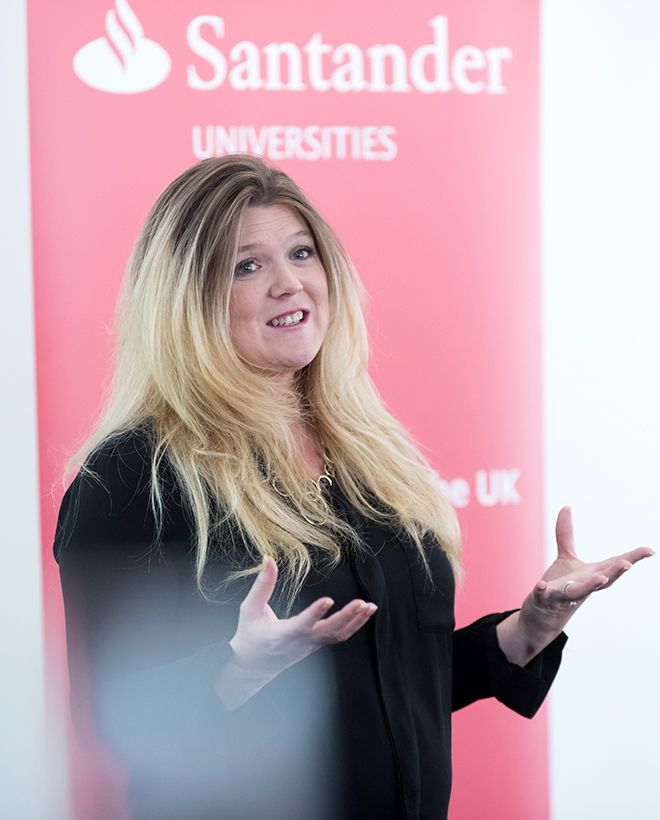 Candice Cunliffe of F6 Agency spoke about how Santander funding had boosted her business.In the academic year 2015-16, Santander provided financial support for 30 students and recent graduates to undertake internships with SMEs. Local entrepreneur Candice Cunliffe, of Surbiton-based F6 Agency, was among the presenters who acknowledged the calibre of students and the commercial support provided by Santander for the scheme, which she said had resulted in her offering two of the University's graduates permanent roles in her marketing and advertising agency.

Sian Bowles was one of the students employed by F6. The graphic design graduate has had two promotions since she started working for Ms Cunliffe in 2015. "If I had gone straight from my studies to a bigger company, I would have missed out on the opportunities I've had," she explained. "It was reassuring that F6 was a well-established business with high-profile clients that had been vetted by the University."

Final-year creative writing and human rights student Ashleigh Osborne said that her 10-week internship at You Press – a social enterprise which helps young authors writing on social issues to share their message with a wider audience – was the perfect match. She said she'd welcomed the opportunity to put theory in to practice in such a fitting company. "It was great to apply what I learned at university to real-life scenarios and see the results in action," she added. "It has definitely helped me to hone my skills and I already have an offer of a place on a postgraduate course for next year, which I doubt I would have secured without the Santander internship." 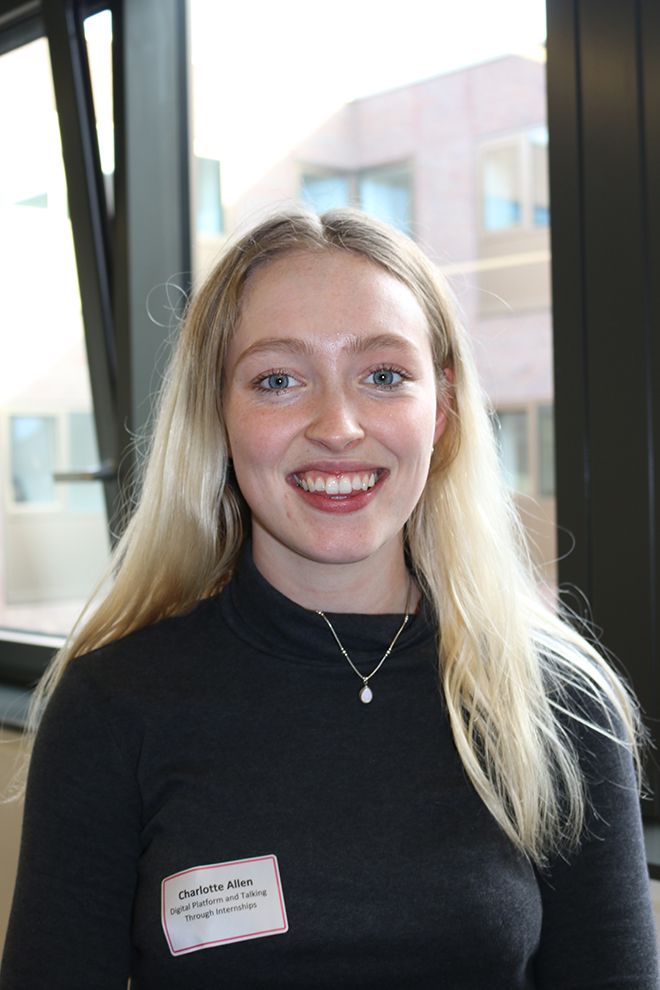 Graphic design student Charlotte Allen shared her hopes for her Shanghai trip at the celebratory event. Charlotte Allen – who is on the second year of her graphic design degree course – along with five of her fellow undergraduate students, is looking forward to an upcoming trip to China where they will take up placements in Shanghai as part of the Faculty of Art, Design and Architecture's Talking Through Internships programme.

Backed by Shanghai Jiaotong University, Charlotte will have the opportunity to work in design firm Crystal CG, in one of the world's fastest growing economies. "This placement offers me the chance to acquire a cultural insight in to what it's like to work in a city that is completely different from London," she explained. "It will also push me to break out of my comfort zone and the bubble of my peers at Kingston – and in terms of career progression, I'll be able to network and create invaluable links with Chinese designers."

Director of Santander Universities' Matt Hutnell commented on the variety of initiatives that were showcased at the celebratory event saying they tied in with the organisation's mission to contribute to the prosperity and development of society. "The stories shared by Kingston University students sum up exactly what we want to achieve and demonstrate how our funding can really help students improve their experience in higher education," he added. 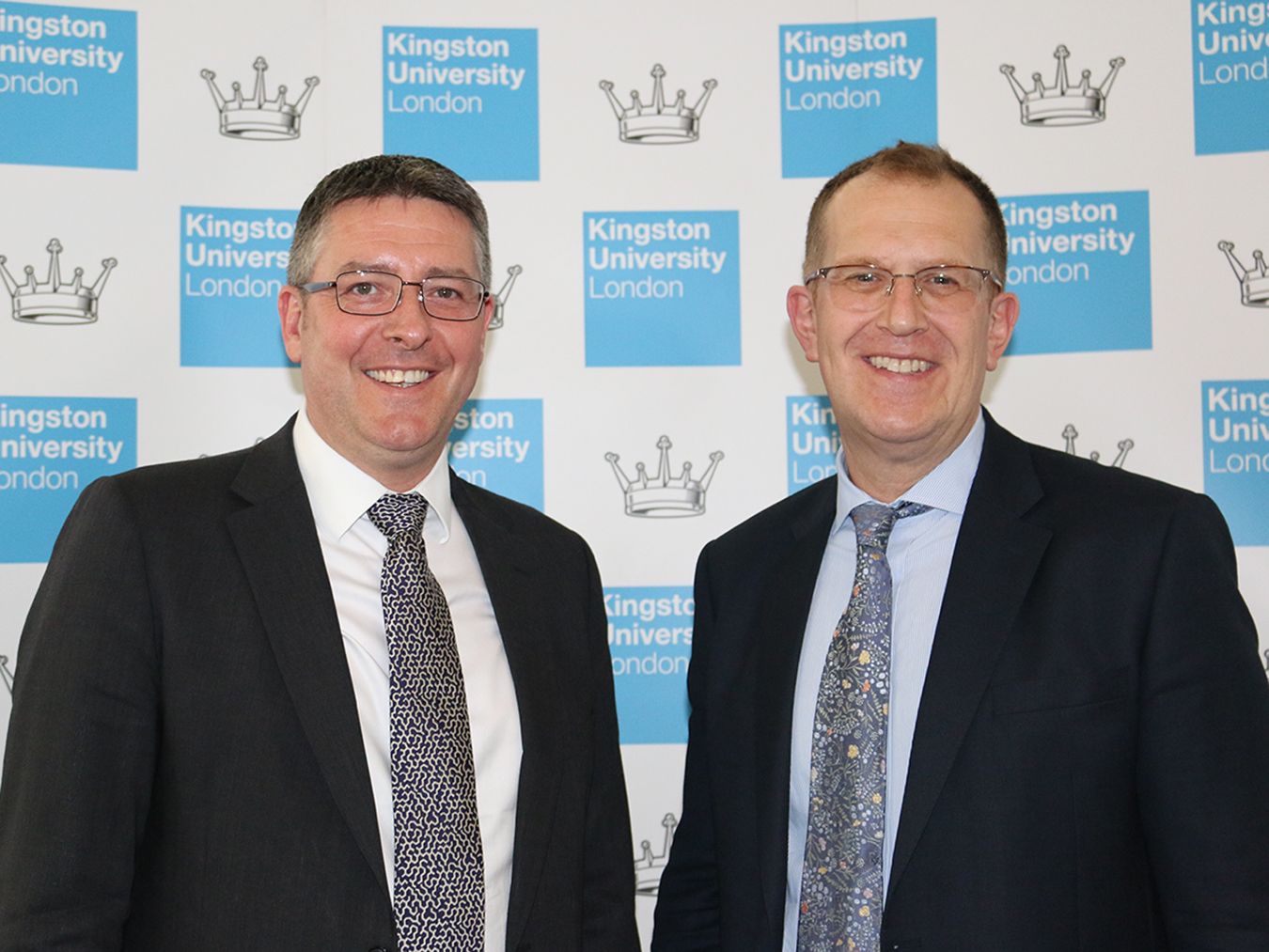