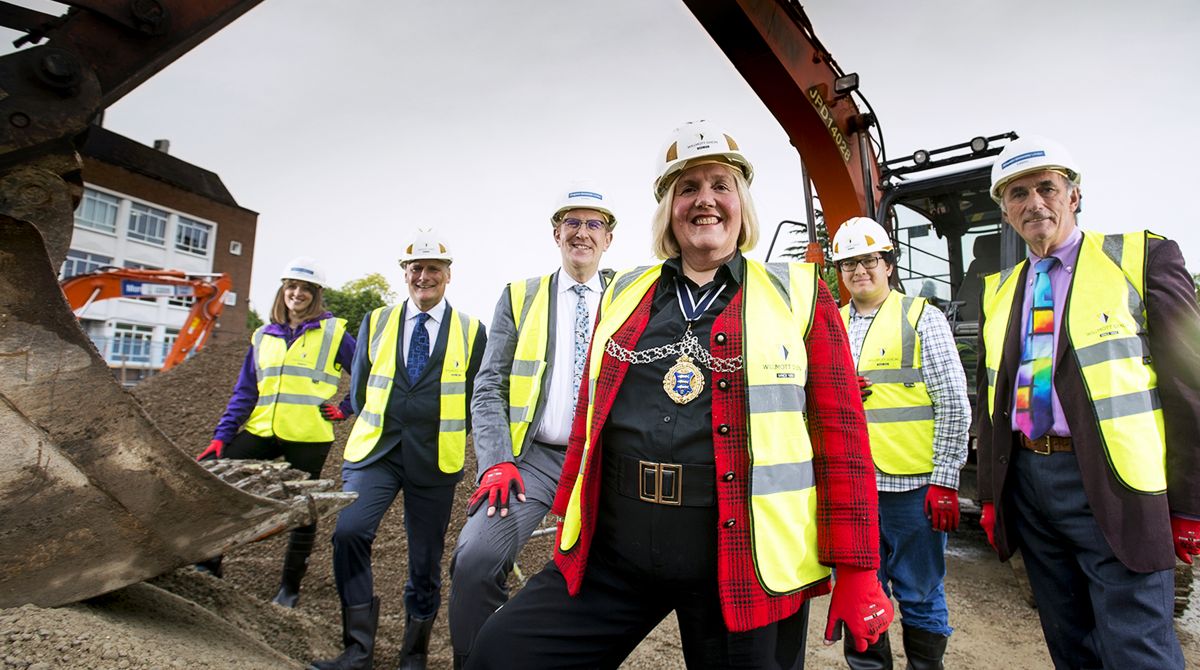 A ceremony has been held at Kingston University to mark the beginning of construction work for the University's new flagship building, Town House.

Around 40 people – including University staff, a number of local councillors and representatives from construction company Willmott Dixon – congregated at the University's Penrhyn Road campus. They were there to catch a glimpse of the diggers, trenches and piles of earth that represented the start of work on the landmark building.

Town House – which will include a Learning Resources Centre, specialist learning spaces, cafés and new landscaped areas – forms part of a major transformation programme being undertaken by the University during the next 10 years to upgrade its estate and enhance the teaching and learning experience. 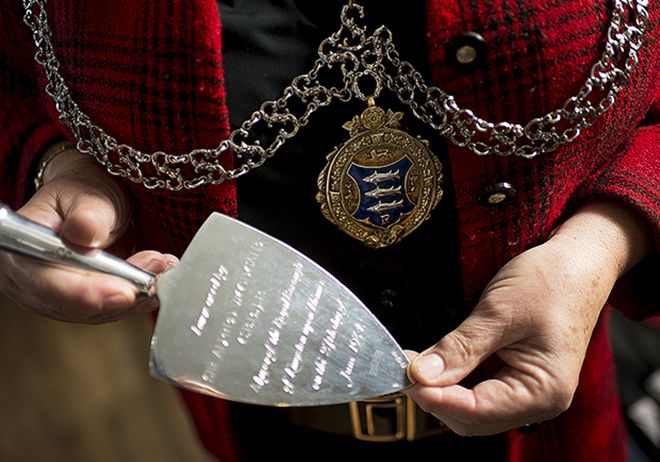 The Mayor brought a silver trowel last used at the Kingston Council Guildhall ground breaking ceremony in 1935The Mayor added a sense of history to proceedings when she produced a vintage silver trowel which she later admitted she'd borrowed from the Royal Borough of Kingston's Guildhall building. "This trowel was actually used at the ground breaking for the Guildhall in 1935 and this is the first time it has ever been out of the building since then," she explained. "I brought it today because, more than 80 years later, it's a symbol of the importance of bringing developer, town and gown together to create this building which I believe is vital to Kingston's future success."

After removing their safety apparel, the group headed to The Picton – one of the University's recently refurbished cafés – where the Mayor, Professor Spier, David Edmonds and Roger Forsdyke joined Leader of Kingston Council Kevin Davis to give brief speeches on the project's progress.

Professor Spier said the building would greatly enhance students' learning and their experience on campus generally as well as be welcoming to residents of the Borough. "We held a stringent RIBA (Royal Institute of British Architects) design competition, hired Grafton Architects – one of the world's leading design practices – and finally, in Willmott Dixon, chose an award-winning contractor up to the challenge of constructing a landmark building," he added. 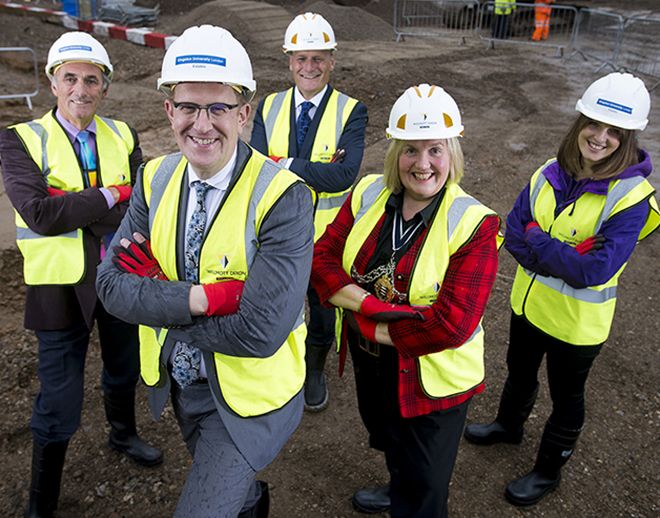 Student Union officer Daisy Bow Du Toit (right) said students were playing an active role in the Town House development.Penrhyn Road Student Union officer Daisy Bow du Toit said it was crucial that open conversations were carried out with students when large projects such as the Town House were undertaken. "The University regularly includes the Union of Kingston Students in meetings about campus developments and is excellent at taking student feedback on board," she said. "The facilities that the Town House will offer will greatly benefit the students at Kingston University and we can't wait for it to be completed."

Leader of Kingston Council, Councillor Kevin Davis said that as a university town the partnership the Council had with the University was an important part of growth and regeneration plans. "As this spectacular building starts to rise from the ground I am sure that Kingston residents will take pride in their University and the contribution it makes to educational, civic and community life in the Royal Borough," he added.

Roger Forsdyke confirmed that as three-time winners of the educational contractor of the year award, Willmott Dixon had understood what Kingston University needed. "We have a proud record in Kingston as a local company based out of Cobham and what you're getting when you employ us is our loyal and reliable supply chain which guarantees quality," he said. "We're all working to achieve something special that will be enjoyed by everyone at the University for many generations to come." 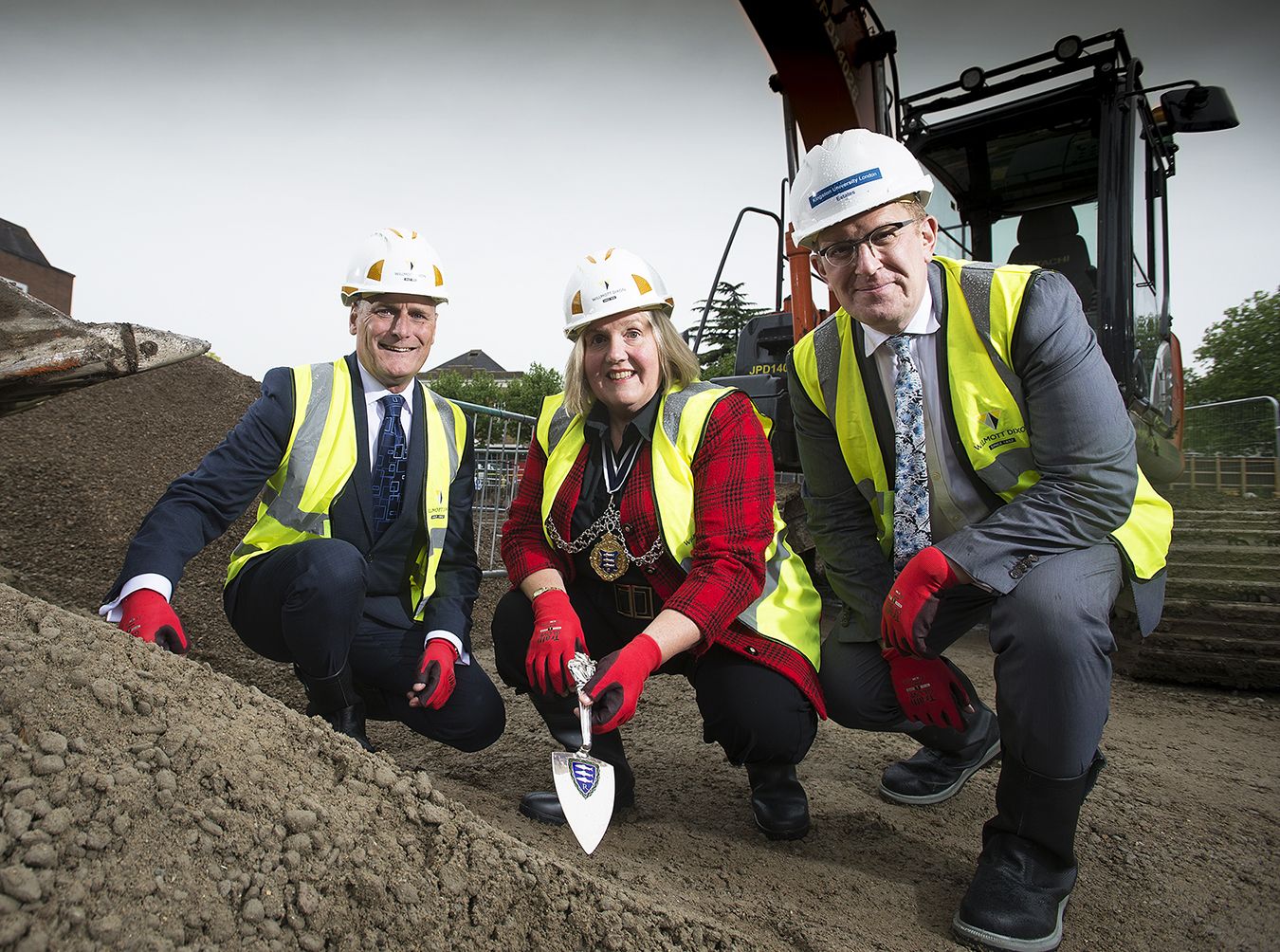