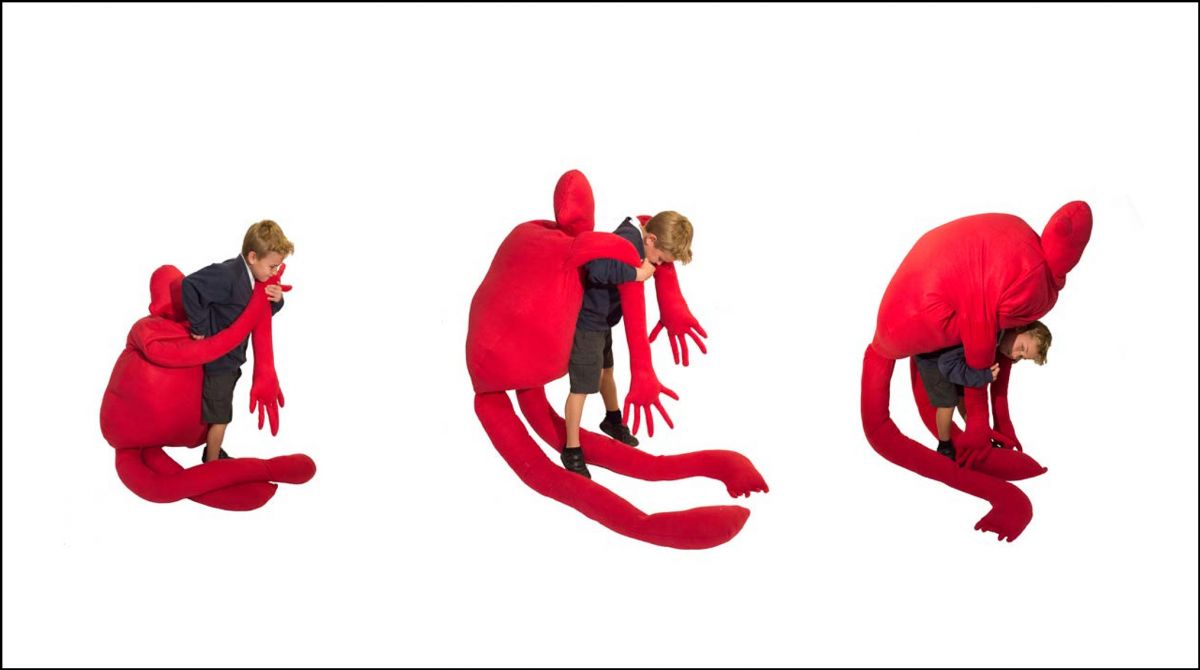 The weight felt by young carers as they do their best to cope with the pressures of looking after older family members in need of support has been highlighted in work by a Kingston University student.

Lottie Fox-Jones has created a scaled up version of a soft toy filled with sand and stuffing accompanied by a message asking visitors to attempt to lift the round red creation or place its elongated arms around them. The piece challenges the audience to put themselves in a young carer's shoes, and made the Illustration Animation BA(Hons) student the first double winner of the Creative Conscience Gold award.

It's a subject close to her heart. "My brother Harvey, now 19 years old, has Angelman syndrome - a rare genetic condition that causes severe learning difficulties, seizures and sleep disorder, and in Harvey's case a mental age roughly equivalent to a 9-month old baby." She said. "The piece represents the physical and emotional weight of caring for someone much larger than you," she said.

The 22 year old from Thames Ditton in London drew on her personal experience and that of her younger brother, 10 year old Milo. "I'm a few years older than Harvey so I've taken on a protective role in his upbringing. His relationship with my little brother is very different, Milo has always been told that Harvey's too strong and he should be wary of him," she explained. "The comparison between our two relationships intrigues me and made me think about other young carers and the support they receive." 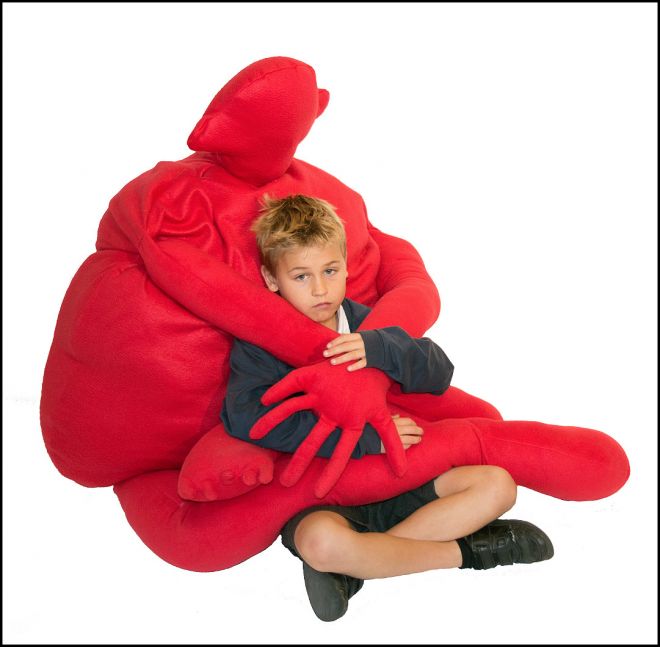 A Heavy Load puts a spotlight on the issues facing young carers"An often overlooked group of carers in the UK is those aged five to eight years old," Lottie continued. "They are thought of as being too young to be the primary caregiver, but in my experience they often have an enormous amount of responsibility and do indeed carry a heavy load," she said.

After first making a 20 centimetre tall prototype of the figure, Lottie set about constructing the larger scale version over a tight two week deadline. Her textile skills came in handy when sewing the three foot long limbs to the plump torso of the larger than life figure, filled with a 25 kilogram bag of sand and 10 kilograms of stuffing - making it movable but not light enough for the average person to lift with ease.

The bright red colour of Lottie's creation was an instinctive choice, but in retrospect adds an important layer of symbolism to the piece. "I chose a primary colour because it is childlike and playful," she said. "Red can mean stop, it can mean love, or it can mean alert or warning."

"I didn't want the figure to be a character, I wanted it to be a symbol - blank like a silhouette, making it easier to project different experiences on to the piece so people experiencing different circumstances can relate to it. Even though it's fun, I didn't want it to be a joke," she said.

Lottie's second award winning work is influenced by the new wave of political engagement among younger voters, their interest piqued by Brexit and the General Election. The piece, called ‘I Raised my Hands', demonstrates the power of speaking out on an issue - being the catalyst for social change.

The subject stands on a marked area on the floor and raises their hand. The movement is detected by a sensor which triggers a further 10 vibrantly colourful arms to inflate, all powered by a single bouncy castle fan motor. The technology was developed in the Kingston School of Art's Hackspace, using Ardueno, an open source prototyping platform enabling users to create interactive electronic objects.

Physical interaction with her work is something Lottie believes is integral to its success. "I want my pieces to start conversations about the possibilities of change, just one voice speaking up can be so powerful," she explained. "It's about being the start of something of something bigger than you imagined. One small movement can be the activator for hundreds of more substantial movements around you." 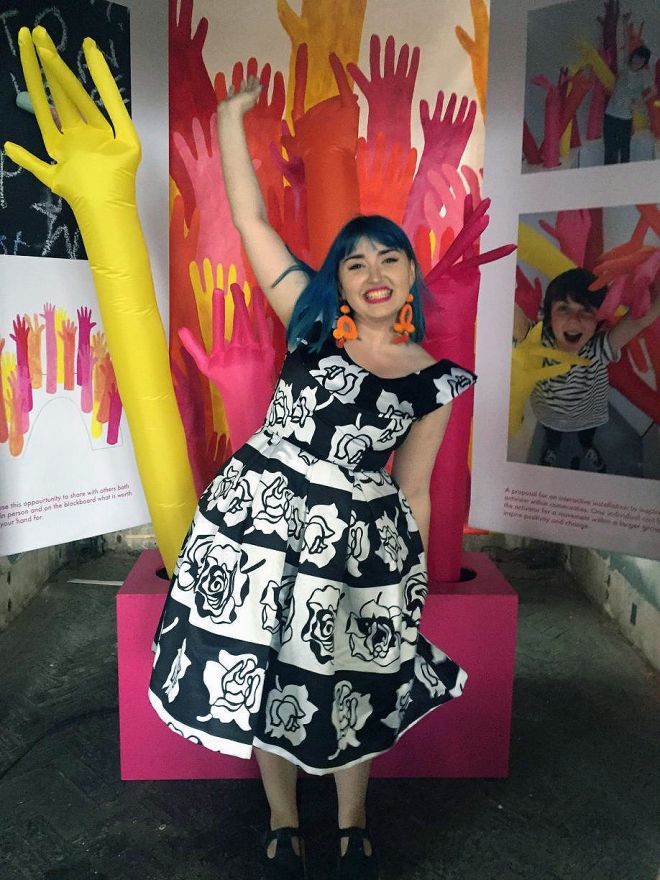 Illustration Animation BA(Hons) student Lottie Fox Jones with her work I Raised my HandSenior lecturer in Illustration Animation BA(Hons) at Kingston School of Art Jane Webster said Lottie's ambition, use of materials and ability to work outside her comfort zone allowed her to realise powerful work. "Lottie uses a vast array of platforms to capture her creative process - from initial drawing, to fabric sculptures, large scale interactivity and film. She is a talented, innovative and ambitious creative thinker who has used her personal experience to engage others," she said.

Kingston University supports young adult carers through the KU Cares programme. Associate Director of Widening Participation, Jenni Woods, said it was important that this group had access to higher education. "The implication of being a young adult carer and the associated pressures can impact significantly on a young adult carer's education, personal wellbeing and lead to financial hardship. KU Cares seeks to support students both pastorally and with some financial assistance," she said.