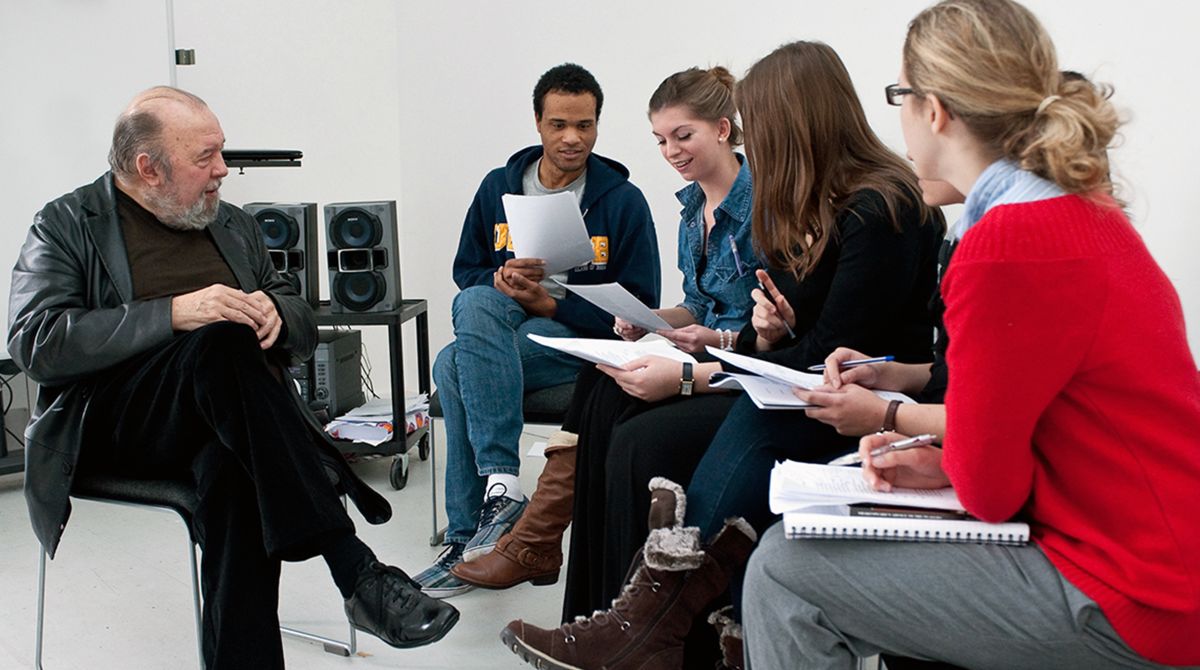 Kingston University's Patron and former Chancellor Sir Peter Hall, founder of the Royal Shakespeare Company, former director of the National Theatre and founding artistic director of the borough's Rose Theatre, has died at the age of 86.

One of Britain's most distinguished directors, Sir Peter became Chancellor of the University in July 2000 and played a hugely influential role in developing the institution as a place that led the way in bridging the gap between artists in training and the professional theatre world. He remained University Chancellor until 2013, when he was appointed Patron.

With a passion for encouraging participation in the arts, the esteemed director was instrumental in the development of the University's partnership with the Rose Theatre and a key driver behind two pioneering classical theatre postgraduate programmes. The Masters courses saw aspiring theatre-makers, actors, directors and designers working with leading industry professionals in state-of-the-art facilities at the Rose.

Professor Richard Wilson, who joined Kingston University in 2012 as the Peter Hall Chair of Shakespeare, said the partnership between the institution and the Rose was central to the great director's ambition of uniting the professional and academic worlds.

"Peter's vision was to bring together actors and academics - one epitomised through the partnership between the University and the Rose Theatre. It is also a vision that informs our Kingston Shakespeare Seminars, which he endorsed as a laboratory for learning about the great playwright," Professor Wilson explained.

"Peter was perfect for academics as he gave rehearsals as if they were seminars. He treated actors as students, whatever their reputations, and students as actors. The real revolution in his work was his insistence on a focus on what the words mean - a technique based on his experiences as a student of F.R. Leavis."

Drama students at Kingston University were fortunate enough to experience rehearsals with the great director in masterclasses he delivered at studios in the Rose Theatre. Some even had the opportunity to appear in his 2008 version of A Midsummer Night's Dream, the Rose's opening production starring Judy Dench as Titania.

Kingston University Vice-Chancellor Professor Steven Spier said both current and former staff and students at the University were extremely thankful to have benefited from the unrivalled knowledge, expertise and generosity of the theatre giant.

"Our students, staff and people across the whole of the Kingston benefited hugely from Sir Peter's involvement with the University - both through his enthusiasm for encouraging wider participation in theatre as well as the instrumental role he played in bringing to life the borough's Rose Theatre, with which the University continues to have extremely close links. While saddened to learn of his death, we are incredibly proud of the legacy he leaves behind here at Kingston University."

With a career spanning more than half a century, Sir Peter directed the world premiere of the English version of Samuel Beckett's Waiting for Godot at the age of 24.  In 1960, when just 29, he founded the Royal Shakespeare Company, which he led until 1968.  While there, he directed 18 plays including The Wars of the Roses, David Warner's memorable Hamlet and the premiere of Harold Pinter's The Homecoming.

He became director of the National Theatre in 1973 and during his 15 year tenure oversaw its move from the Old Vic to purpose built premises on London's South Bank.

Sir Peter won two Tony Awards on Broadway, received an Olivier Award for Lifetime Achievement in 1999 and was knighted in 1977 for his services to the theatre.  He also directed more than 40 operas around the world, including a celebrated version of Wagner's Ring cycle at Bayreuth to mark the 100th anniversary of the composer's death.

He died on Monday 11 September at University College Hospital in London, surrounded by his family.