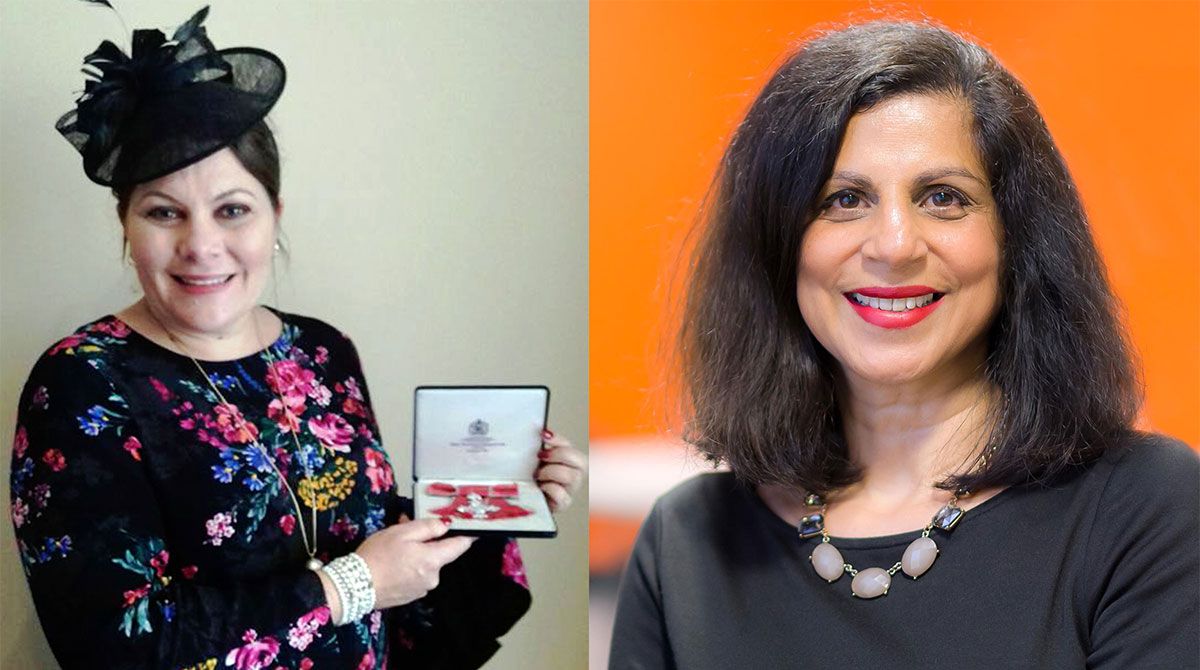 Associate Director of Widening Participation Jenni Woods, left, was presented with her MBE at Windsor Castle, while Director of Student Achievement Nona McDuff received her OBE at Buckingham Palace.

Two  Kingston University staff members acclaimed for spearheading the drive for diversity, inclusivity and widening access to higher education have been honoured for their achievements at investiture award ceremonies at Buckingham Palace and Windsor Castle. Nona McDuff and Jenni Woods both collected their awards this month after being recognised in the Queen's 91st Birthday Honours List earlier in the year.

Director of Student Achievement Nona McDuff was awarded an OBE for services to higher education when the honours were announced, while Associate Director of Widening Participation Jenni Woods and Professor of Rehabilitation Research Fiona Jones were both awarded MBEs for services to widening access to higher education and research into stroke rehabilitation respectively. Professor Jones is set to receive her award in February next year.

As former Director of the University's Equality, Diversity and Inclusion team, Ms McDuff has led the University in an ambitious programme of activity to make courses as inclusive as possible which led to it securing the coveted Guardian University Award for Teaching Excellence earlier this year. She also headed up the work to instil greater diversity in to the academic career framework, which saw the University scoop the Guardian newspaper's HR Diversity Initiative Award in 2014.

Ms McDuff, who was presented with her award by His Royal Highness The Prince of Wales, said that although it had been an awe-inspiring experience, Buckingham Palace officials had been very good at putting award recipients at ease and ensuring everything ran smoothly. "We were briefed on everything – from where we would be seated to the protocols of how to curtsey," she said. "Everything was superbly organised and I thoroughly enjoyed the day."

Ms McDuff said it had been incredible to be part of a group of individuals who had been identified for their accomplishments in their respective fields. "It was a great privilege to talk to some of my fellow recipients, who came from all different walks of life and had done some incredible things," she said. "Listening to their success stories made me reflect upon and value my own achievements more and gave me the confidence to carry on working for greater social change in higher education."

Jenni Woods leads a team dedicated to encouraging people from under-represented groups to move on to higher education. She played a pivotal role in designing and leading the University's Compact Scheme – which provides tailored support for more than 1,000 students each year from disadvantaged groups and families without a history of higher education.

Ms Woods echoed Ms McDuff's enthusiasm about the once in a lifetime event. "I felt honoured to be counted among such an inspiring group of individuals," she said. "The opportunity to celebrate the contribution made by ordinary people to such a range of valuable work is what makes these awards really special," Ms Woods, who was presented with her award at Windsor Castle by Her Majesty The Queen, explained.

The duo's success – along with the work of Professor Jones – highlighted the University's commitment to encouraging women leaders in higher education, according to Ms Woods. "It is always gratifying to see examples of strong female leadership, especially in higher education where women still remain under-represented at the most senior levels," she said. "Kingston University prides itself on promoting equality and inclusion for its students and staff, so for three of our female staff to receive investiture awards is a great achievement."

Ms McDuff was also keen to emphasise the significance of people from black and minority ethnic (BME) backgrounds being recognised for their achievements. "Being an immigrant and a person of colour, I never imagined that I would receive an award. It is really important that there is greater representation of BME people in the Honours Lists," she added.

Praising the University for its encouraging environment, Ms McDuff said she believed her success could be an example to others. "Higher education is about ideas, and Kingston is a fantastic place to develop these," she said. "I hope our awards inspire other Kingston University members of staff - whether from professional services or academia - to be drivers of change. If I can do it, I believe others can too."