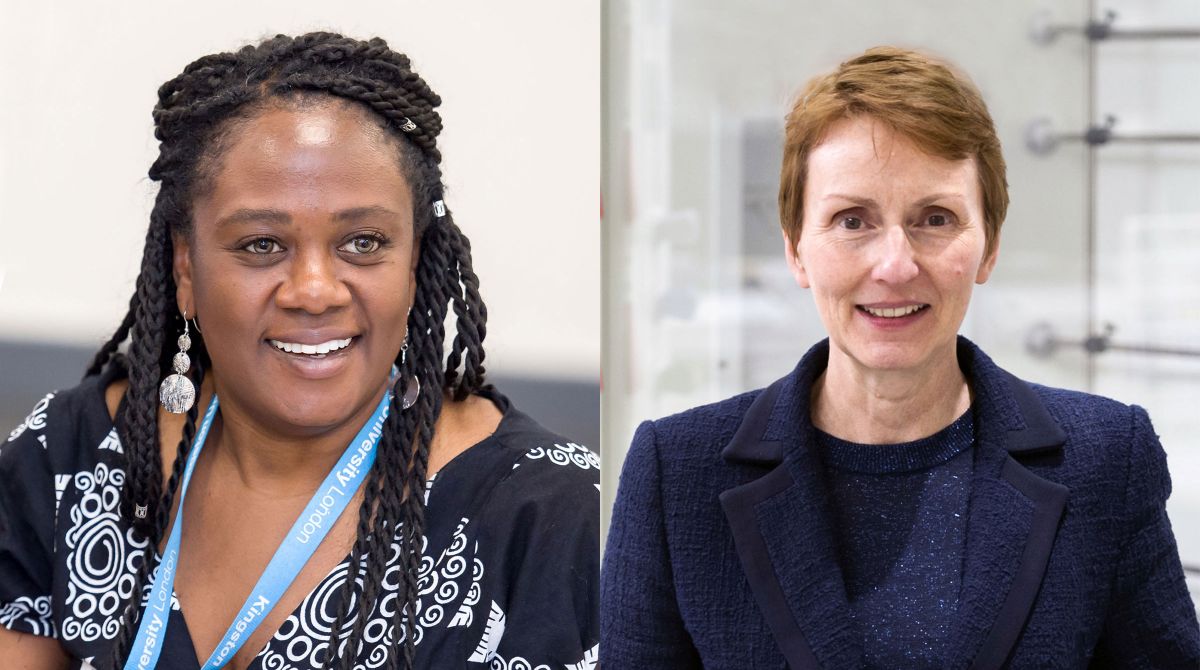 Nursing graduate and entrepreneur Neomi Bennettt (left) and former technical manager Helen Sharman OBE were among those who featured on the New Year's Honours list.

A pioneering former Kingston University nursing student who invented an aid to help patients don medical stockings which prevent deep vein thrombosis has been recognised in the New Year's Honours list. Neomi Bennett has been awarded a British Empire Medal for services to nursing and healthcare following the design of the Neo-Slip – a low friction pouch that is put on the foot allowing tight anti-embolism stockings to slide on more easily.

The entrepreneur and nurse said it had come as complete surprise to be recognised in the New Year's Honours. "I created this product to make life easier for patients I used to treat when I worked as a community nurse who really struggled with their stockings," she explained. "For the Neo-Slip's success to be acknowledged in this way is overwhelming and a huge personal achievement."

The idea for the Neo-Slip was born in 2011 when Neomi was carrying out research for a degree assignment. Tutors from her Adult Nursing BSc (Hons) course – which is run in partnership with St George's, University of London as part of the Faculty of Health, Social Care and Education – were so impressed with Neomi's invention they encouraged her to enter the University's annual Bright Ideas competition. Neomi triumphed taking home the winner's prize of £1000 funding alongside mentorship from the University's enterprise team to help her develop her idea further.

After completing her degree in 2012 and qualifying as a registered nurse, Neomi took the decision to try and secure further investment and take the Neo-Slip to market. The product's practical and ingenious way of increasing patient comfort saw Neomi's company take-off and flourish. Today, the Neo-Slip is available on NHS prescription, from general practitioners, Boots stores and online.

Neomi credits her time at Kingston University for laying the foundations for her success. "I came to the University as a mature student with ambitions to become a nurse and to be a role model for my three children," she said. "I never thought about being an entrepreneur – but my tutors backed my idea from day one. They encouraged me to work with the Enterprise team – whose advice and mentorship has been invaluable."

With the experience of designing a multi award-winning product and running her own company under her belt, Neomi is now providing mentorship of her own to the next generation of entrepreneurs. "I work from The Nest at Kingston University – an incubator space created for students and entrepreneurs – and I also mentor a student on the Beyond Barriers Mentoring Scheme," she said. "It is important for me to share my experiences and to help others on their way up."

Neomi now has her sights set on launching a new invention. "I have just submitted a patent for a hospital gown which is designed to give patients more modesty. All my products aim to increase patients' comfort and empower them to become more independent," she said.

Kingston University's Head of Nursing Dr Julia Gale said Neomi's award was well-deserved. "She is a shining example to our students of how nursing can take individuals on many different career pathways," she said. "Neomi has used her knowledge and experience of being a practicing nurse to develop a product with the potential to improve a patient's condition. The collaboration between Neomi and the Enterprise team showcases how Kingston University is dedicated to nurturing initiative and talent."

First Briton in space, Kingston University Honorary Graduate and former technical manager at the University's Faculty of Science, Engineering and Computing, Helen Sharman OBE, has been made a Companion of the Order of St Michael and St George for her educational outreach work.

Ms Sharman – who in 2016 opened a science laboratory named in her honour – said she was thrilled to receive this award, in particular because it recognised the importance of science and technology outreach activity. "I am passionate about making these subjects relevant and accessible," she added. "Ensuring students from a wide range of backgrounds continue to study science and technology stimulates discussion and knowledge transfer, which ultimately makes a huge, positive impact on society."

Other notable Kingston University alumni and honorary graduates to make the 2018 New Year's Honours list include:

Dr Anne Rainsberry – Regional Director of London for NHS England and postgraduate managing human resources alumna (1991) – has been awarded a CBE for her services to the NHS.
Lady Susan Hampshire – actress and honorary graduate who officially opened the University's John Galsworthy building in 2007 – receives a CBE for drama and her charity work.
Vinodka Murria – who completed an MBA at the University in 1995 – has achieved an OBE for services to the UK digital economy and for advancing women in the software sector.
Frances Hawkes – who studied professional studies in education – receives an OBE for her services to education.
Colin Squires – honorary graduate who studied architecture at the University – has been awarded an OBE for services to the horticultural industry and to charity.
Dr Nicholas Gair – who graduated with a Bachelor of Education in 1984 – receives an MBE for services to ex-service personnel and young people in London.
Philippa Webster – NSPCC Trustee and postgraduate in personnel management – has been awarded a British Empire Medal for her services to children and young people.