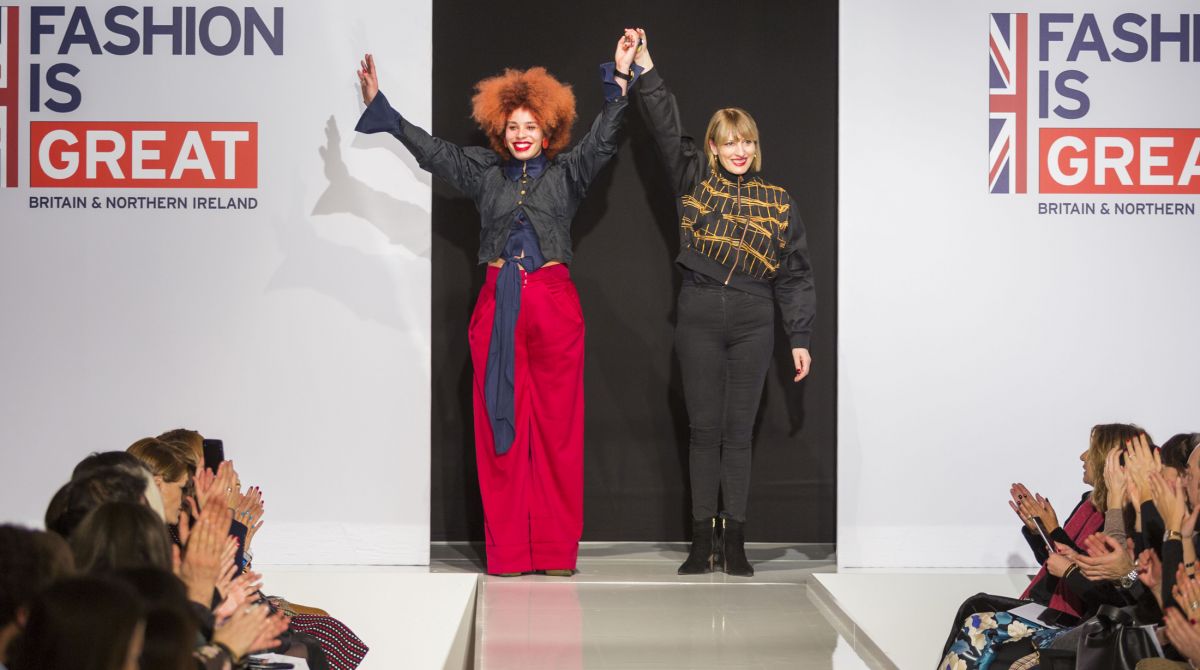 Originally from Mirfield, West Yorkshire, Sadie said the event made her feel proud to be British, and struck a chord as diversity has been at the heart of her work since the very start of her career. Models of varying sizes, physical abilities and ethnic backgrounds wore her collection, which was crafted from suedes, satins, corduroy and velvet in rich rusts, copper, nude and grey tones, creating powerful, feminine silhouettes adorned with metalwork.

Growing up in a small village where being mixed race made her stand out, Sadie embraced her own distinctiveness from an early age. "I thought, I'm already different so let's encourage it, let's embrace it," she said. "I used to go shopping and buy crazy vintage bits and then start playing around with makeup – I'd wear bold, gold eyeshadow."

Recognising the beauty of her own diversity helped fuel her love of fashion and inform her work as a designer. "I always knew I wanted to go down the fashion route. I remember from a young age thinking why is everybody wearing the same stuff – it's so boring. Seeing my clothing on diverse models is perfect because it encapsulates the whole idea of anything goes – no matter what size, colour, disability, age," she explained. "It all rocks." 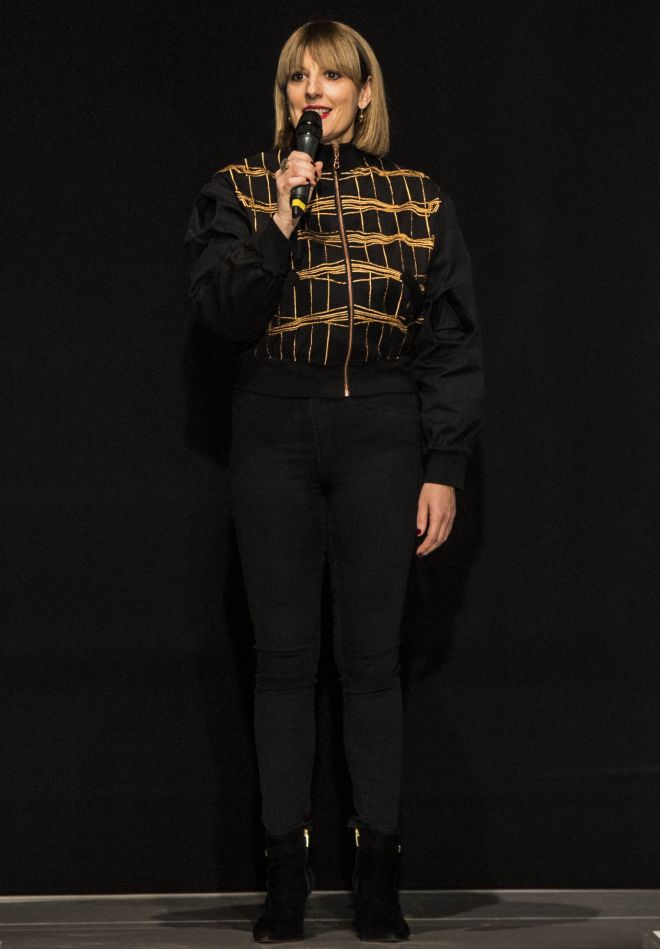 Ambassador Jill Morris wearing a Sadie Clayton jacket. Image: Alessandro Serrano'/AGF/REX/ShutterstockWatching her clothes grace the Italian catwalk was not the only high point of the event for the young designer. The 27 year old was also thrilled that ambassador Jill Morris, herself a passionate advocate of British fashion in Italy, sported one of her jackets. "She absolutely loved the design and she looked amazing in it," Sadie said. "What's great about her is that her aim is to open the doors and promote diversity."

Sadie believes the move to a more diverse fashion industry is definitely underway, and that now is a perfect time to promote it on the catwalk. "A shift in thinking is gaining momentum, but it's been around for a long time. I've worked with Caryn Franklin who's a leading diversity campaigner since the day she handed over my certificate at graduation and she's really promoted these issues on the catwalk."

Caryn Franklin MBE is professor of diversity at Kingston University and co-founder of All Walks Beyond the Catwalk, which promotes a broader range of beauty and body ideals in the fashion industry. Sadie interned with Caryn after her graduation and her work really taps in to issues Caryn believes are at the heart of the industry's future. "When I saw Sadie in a crowd I wanted to know more. She lives her work – she is a brilliant mannequin for her own designs.  She's also a conscious creative, there are ethics around diverse portrayal in her work,"  Caryn said.

"Taking responsibility and becoming accountable for the messaging you're putting out around your work as a fashion designer is vital if we are to have an industry that can showcase diverse representations of humanity and be inclusive. The way Sadie presents her work helps glamorise a range of appearances. It also normalises them, so we don't have an industry that is just presenting this unachievable body ideal which is inevitably white, thin and very young."

Sadie graduated from Kingston University's BA(Hons) Fashion degree in 2013, with a collection that included a glimmering dress made of 2,000 copper plumbing brackets and saw her named runner-up in the Graduate Fashion Week London showcase's award for innovation. Looking back on her collection now, the pieces remain her favourite she's ever produced. "My graduate collection was really when I could do what I wanted and show the world what I'm made of, and it's nice to know I've been true to myself," she said. 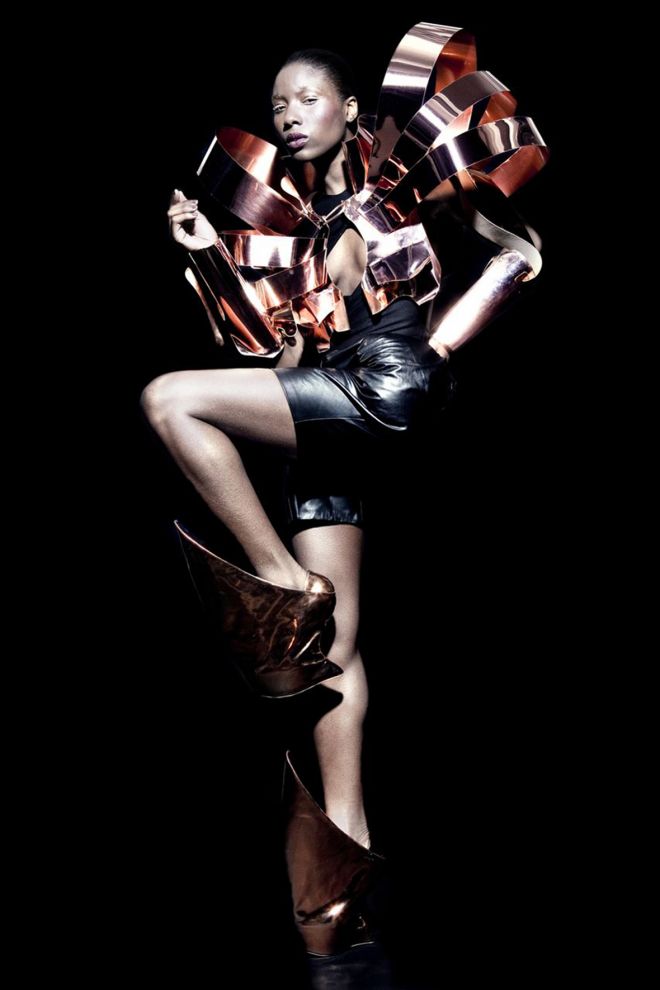 Sadie's voluminous metal sculptures caught the attention of judges at Graduate Fashion Week 2013.As part of her production process, Sadie heats copper using a gas burner to produce amazing colours, including striking greens as the metal oxidises. "For my final collection I used an African model and the copper tone next to her skin was incredible," she said. "It's such a striking image."

"I am a fashion designer because what I produce fits the body, but if you remove the body from my pieces I'm an artist," she said. "I've worked with the Tate Modern, Tate Britain, I've had a meeting at Saatchi; there are a lot of art things on the horizon."

Sadie's advice to the next generation of aspiring fashion designers is to make the most of their time at university, using the facilities and support of the tutors fully. "Explore all avenues of creativity – the minute you get into the real world you've got restrictions," she said. "People don't wear copper metal sculptures, so I've got to use that as the starting point to design more wearable pieces. It's your time where you can express your identity through clothes."