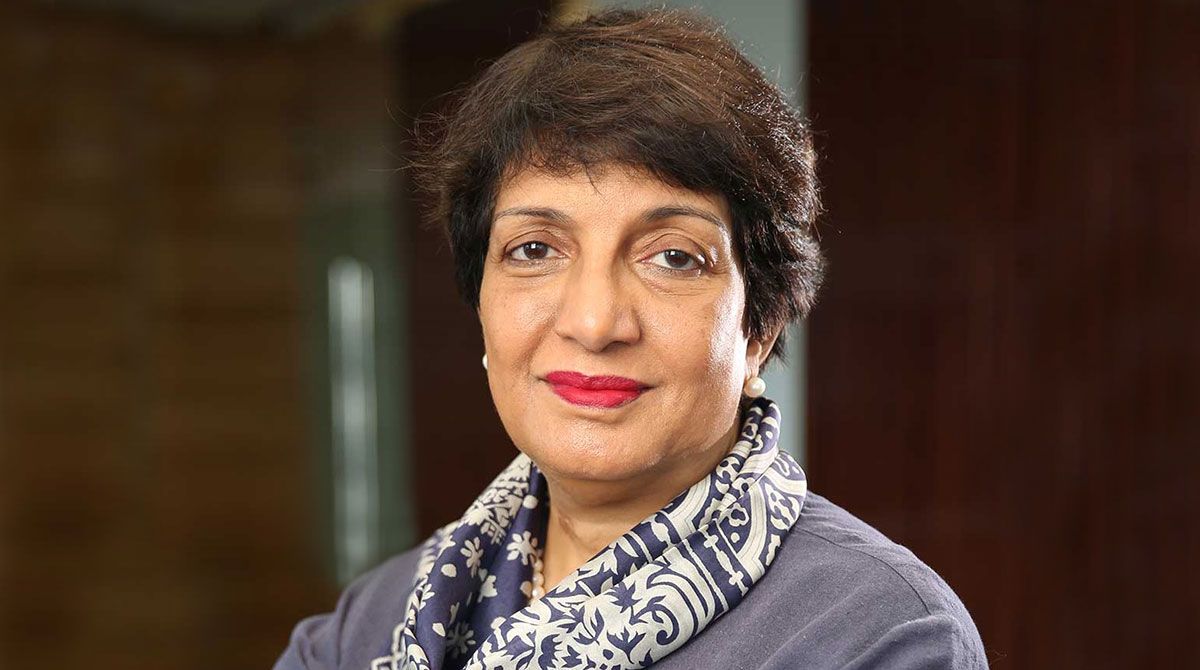 Sima Kamil has been recognised by international business network AACSB for being a global inspiration to women.

Kingston Business School alumna Sima Kamil has been recognised as a 2018 Influential Leader by the Association to Advance Collegiate Schools of Business (AACSB).

Sima – who achieved a degree in business studies from Kingston University in 1983 – has been included in the listing as a shining example of success for aspiring Pakistani women and also for breaking down barriers for all women in non-traditional industries. The honour comes just ahead of International Women's Day on 8 March.

The business graduate, who has worked in the banking sector for more than 30 years, is president and chief executive officer of United Bank Limited – Pakistan's second largest private bank with more than four million customers and 13,000 staff. Sima is the first woman to lead a financial institution of this size in Pakistan's 70-year history. Her appointment broke the glass ceiling that is commonly associated with women in the corporate world generally, but particularly within the banking industry where there are few women in leadership roles. Shortly before her move to United Bank Limited, Sima was named in Pakistani's Powerful Women in Business list.

Sima said it was important for women to be represented across all industries, especially in the traditionally male-oriented banking sector. "I was one of three female corporate leaders invited by the Pakistan Stock Exchange to perform the opening bell-ringing ceremony to promote women's inclusiveness in top corporate leadership positions," she added. "It's an honour to be recognised as a role model for women in the industry – particularly as we prepare to celebrate International Women's Day – and I believe that, above all, hard work always pays off."

AACSB is the world's largest business education network. Its annual Influential Leaders Challenge initiative honours notable alumni from AACSB-accredited business schools who are making a positive impact in communities around the globe. The goal each year is for 29 business pioneers chosen from 13 industry sectors to serve as role models for the next generation of business leaders who have careers addressing today's most pressing social, economic, environmental, and educational challenges.

Dean of Kingston Business School Professor Ron Tuninga said Sima's achievements closely reflected the School's mission to support diversity and create life-changing opportunities. "Sima's accolade recognises the ways in which advocates for inclusion are driving transformation across the corporate sphere by upholding a culture of mutual respect and championing the exchange of open ideas," he said. "What she has accomplished since she graduated from Kingston Business School is an inspiration to today's students to pursue their dreams in non-traditional fields of study and professions. "

President and Chief Executive Officer of AACSB Thomas R. Robinson said each honoree from the 2018 class of Influential Leaders reflected the mindset, knowledge and passion that impactful business leaders needed to embody to impart positive change in today's society. "We would like to thank Sima Kamil for demonstrating the true excellence and leadership we wish to see in the world," he said. "We congratulate Kingston Business School for its role in helping to mould a new generation of global business leaders dedicated to driving impact that results in global prosperity."