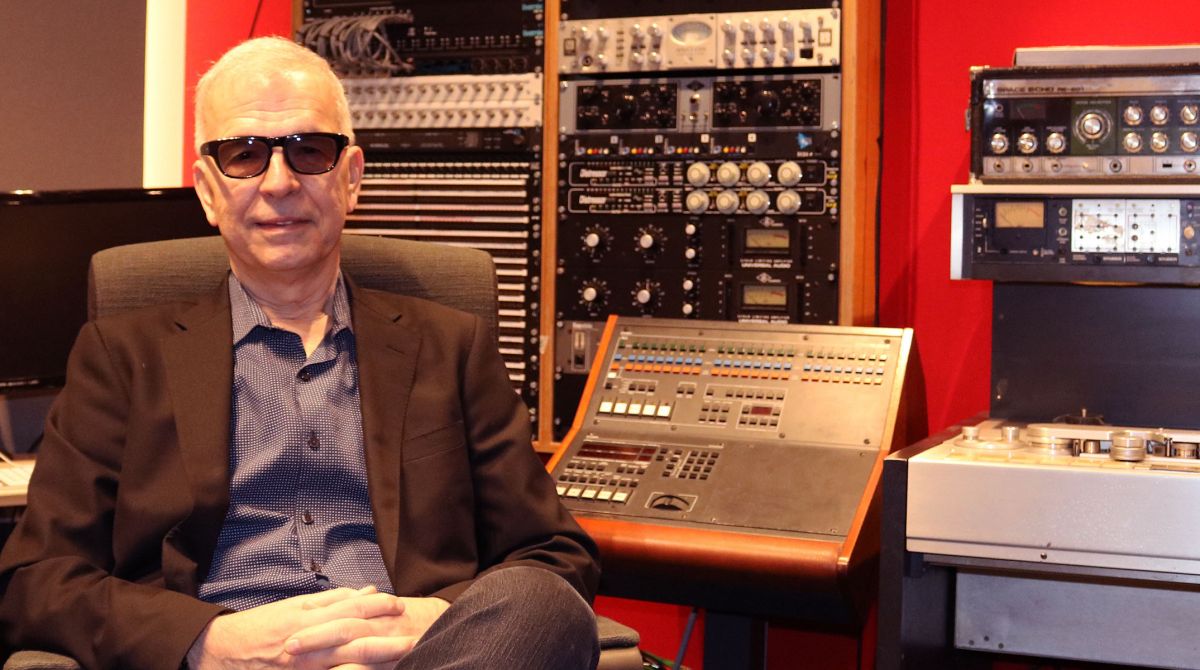 World-renowned producer and David Bowie collaborator Tony Visconti has treated Kingston University music students to a masterclass in production at its acclaimed analogue recording facility, the Visconti Studio. Drawing on his 50 years' experience in the music industry working alongside global superstars such as Thin Lizzy, Morrissey and Damon Albarn, the American producer, who is a visiting professor at the University, revealed the methods he used to get the best out of his artists.

Speaking to students in the 300 metre square octagonal live room of the tape-based studio named in his honour at the University's Kingston Hill campus, the legendary record producer explained how getting the best performance out of artists often involved going beyond advice or coaching, with T-Rex frontman Marc Bolan a case in point. "I discovered with Marc that, while he didn't need a vocal coach, he needed to feel safe and secure," Visconti said. "A recording studio can be really daunting, so I would dim the lights for our sessions and even took over the engineering role for one album, as Marc wanted me to be in charge. Creating a secure environment is probably the most important element in getting the best out of a recording."

It was a different challenge with David Bowie, who Visconti met when the singer was just 20 years old and still experimenting with a range of different styles and genres. "Bowie wasn't sure what he wanted to be – he thought he wanted to go into musical theatre but was very mercurial," Professor Visconti recalled. "It was my job to channel him and find at least one style that was consistent on a whole album.

"He sounded most natural when he played on his 12-string guitar so I steered him to explore this folk rock territory. I'd say it wasn't until The Man Who Sold The World album in 1970 that it all came together."

The revered producer credits being able to share such insights with the next generation of composers and producers in his role with Kingston University as being hugely important. "I started my professional career as a record producer in 1967 and am still producing albums to this day," he said. "I have seen how much technology has changed over the years and I feel today's music production students really need to hear about some of the things I've witnessed and been a part of."

Hearing first-hand what really goes on inside a professional recording studio offered students a rare insight into the vital role a producer plays in creating a successful track, according to first year music technology student Ershad Alamgir. Ershad, who gave up a career practising law to follow his passion for music and enrol on the course at Kingston University, said that being just a few feet away from one his idols was an incredible experience. 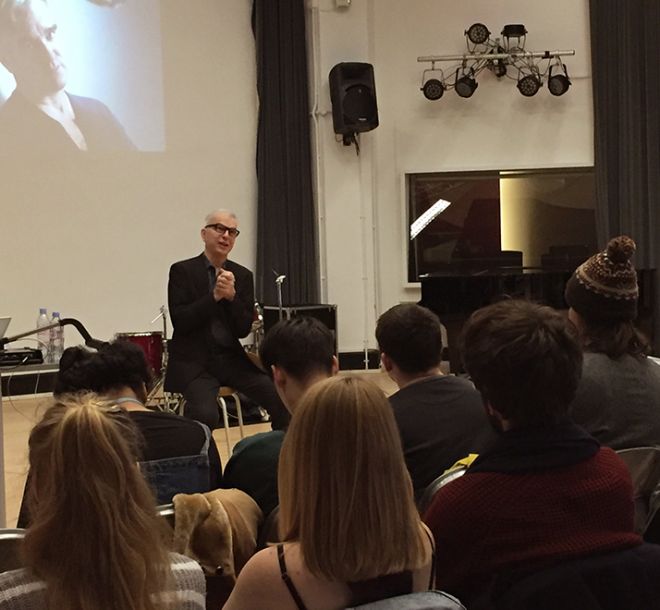 Tony Visconti shared stories from his time working with artists such as T-Rex, David Bowie and Morrissey at the masterclass."One of my main reasons for coming to Kingston University and taking up this course was the Visconti Studio and Tony Visconti," he said. "While we can learn the techniques of recording in class, hearing about the way he deals with artists and the methods he uses was invaluable."

It was Visconti's firm but fair approach in the way he dealt with artists – ranging from those who were notoriously difficult to work with to musicians who turned up to sessions under the influence of drink or drugs  – that really resonated with students. Encouraging them to be courageous in their approach, Visconti told the group: "Your job is to get the best music out of your artists, so you have to maintain your rules and regulations and be prepared to get tough when you have to."

The Visconti Studio opened in September 2015 and has become a central focus of teaching at Kingston University, boasting a wealth of rare analogue recording equipment and vintage musical instruments. Designed and built in accordance with Visconti's vision, it is not only used as a key teaching resource but also a key destination for visiting artists to come and record. In recent weeks, Mr Visconti played host to his former colleague and friend, rock drummer Woody Woodmansey – who he collaborated with on Bowie's The Man Who Sold The World album.

"Kingston University and the Visconti Studio are very special to me and the studio has definitely become an extension of myself." Visconti said. "I intend to do some big projects here, including recording albums with students as my assistants. It's the perfect place to teach and learn and be part of a great project that will eventually be known throughout the world. I can't wait to see what the future brings – for all of us."