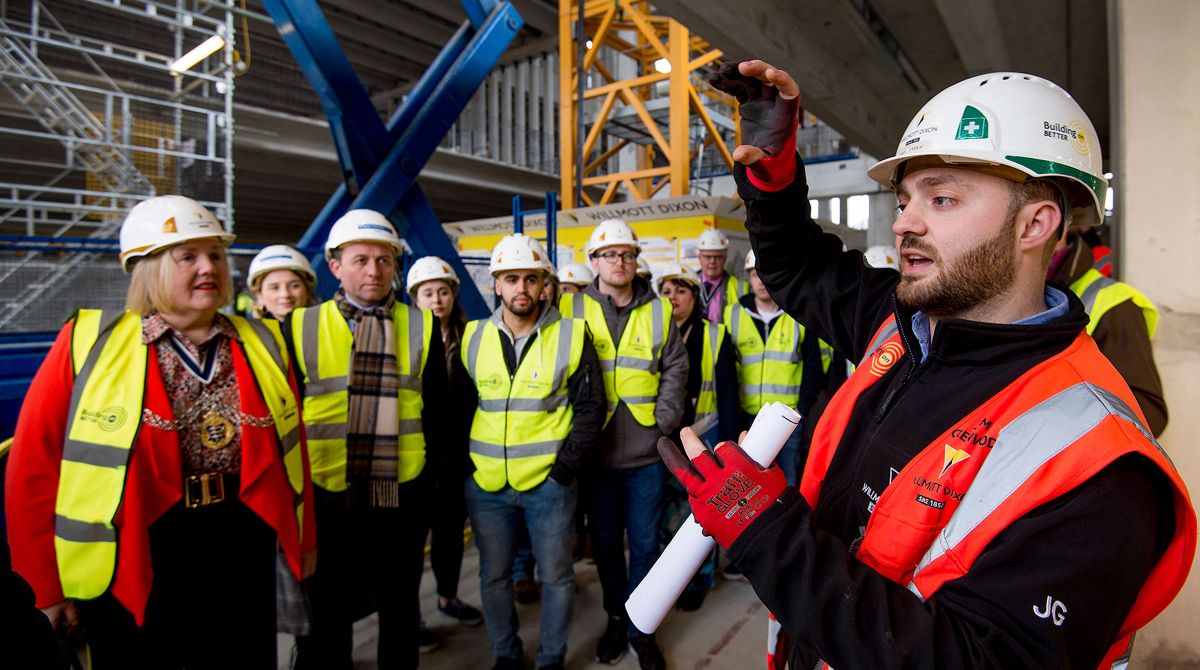 More than 250 staff, students and members of the local community joined the Mayor for a Town House site tour.

Mayor of Kingston Councillor Julie Pickering has again donned a hard hat as, just 10 months after attending its ground breaking ceremony, she joined members of the community to get another first hand look at the construction site for Kingston University's flagship Town House building. The visit came as the University and construction company Willmott Dixon hosted a series of special site visits as part of Open Doors Week – a national initiative giving members of the public a chance to see behind the scenes at major construction sites across England, Scotland and Wales.

The University's Pro Vice-Chancellor for Culture and Public Engagement Professor Colin Rhodes also took the opportunity, alongside the Mayor and 25 other eager spectators, to see how Town House construction was progressing.

After a brief introduction, the participants were kitted out with hard hats and high visibility jackets before stepping out on to the site, greeting construction industry mascot Ivor Goodsite on the way. Representatives from Willmott Dixon were on hand at each stage of the tour to explain the finer details of construction and to answer questions on topics ranging from the type of bricks that will be used to the building's green credentials. 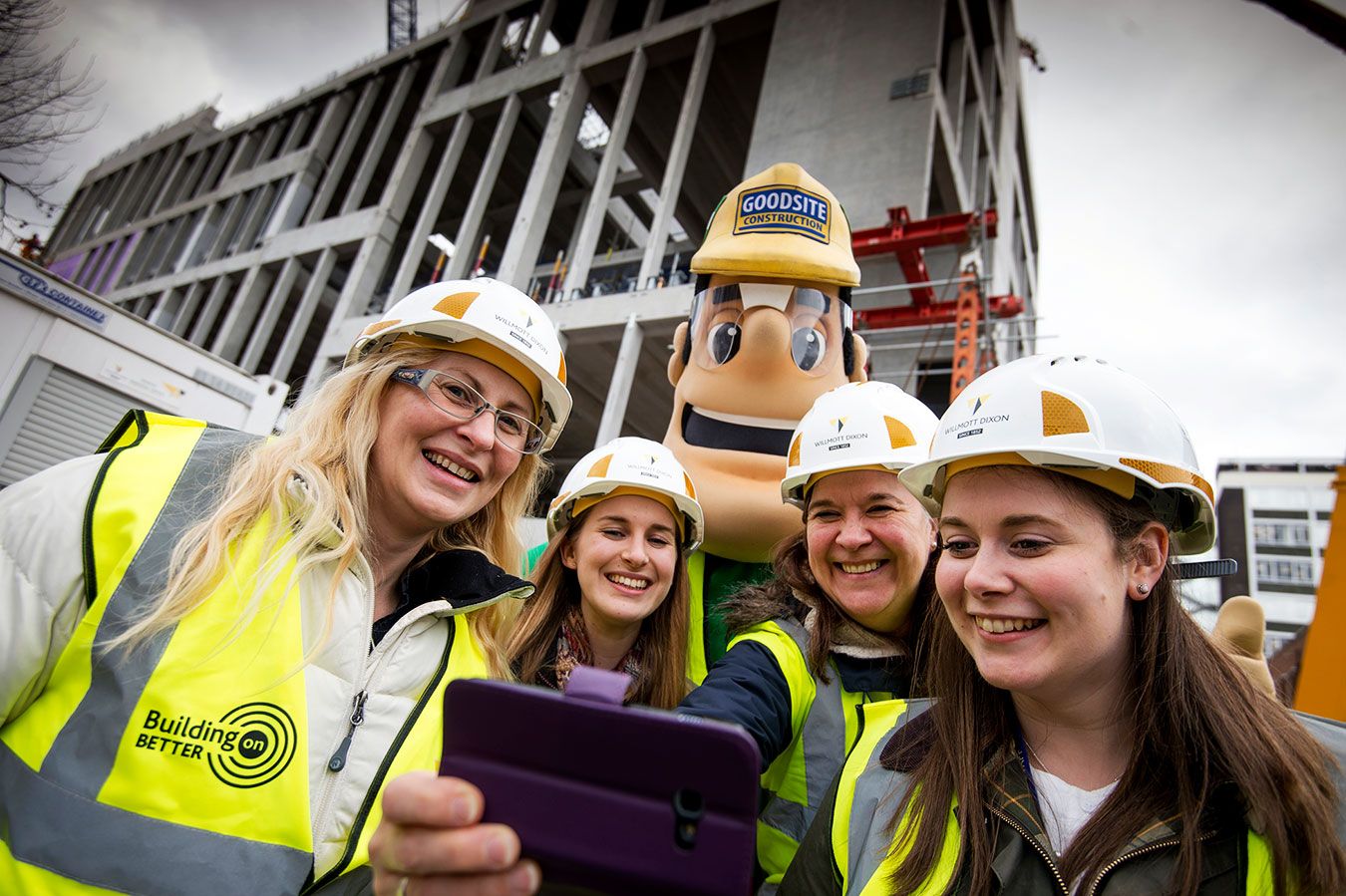 The University was delighted to welcome the Mayor of Kingston and members of the public onsite, Professor Rhodes said. "Town House will provide a new focal point for how the University engages with the local community who will have access to the cafes, covered courtyard, library and roof terrace when it opens in September 2019," he added.

Kingston Mayor Councillor Julie Pickering said it was hard to believe how much of the building had been completed since she had put a spade in to the site at the ground breaking ceremony last May. "I was particularly impressed to be standing in the courtyard which will be a great space where everyone can join together," she said. "Town House really is a true town and gown project and the partnership between the Royal Borough of Kingston, the University and local community is what makes it so special."

Managing Director of Willmott Dixon Roger Forsdyke said an innovative construction method was helping Town House take shape so rapidly. "It is pre-cast, which means the entire concrete frame has been manufactured offsite and is being assembled piece-by-piece – making it like a giant 3D jigsaw," he explained.

"Open Doors is an opportunity to showcase construction as the exciting and diverse industry that it is and what better way to do it than with this project," he said. "It has been a pleasure to take part in Open Doors 2018 which will see more than 220 people from the local community, as well as staff and students from the University pass through the gates to see this fantastic project as it comes to life."

Town House will be the first building to be opened in the UK designed by RIBA award-winning and Stirling Prize nominated Grafton Architects. Willmott Dixon was appointed in 2016 and work began in April 2017. Town House will include a Learning Resources Centre, specialist learning spaces and new landscaped areas. 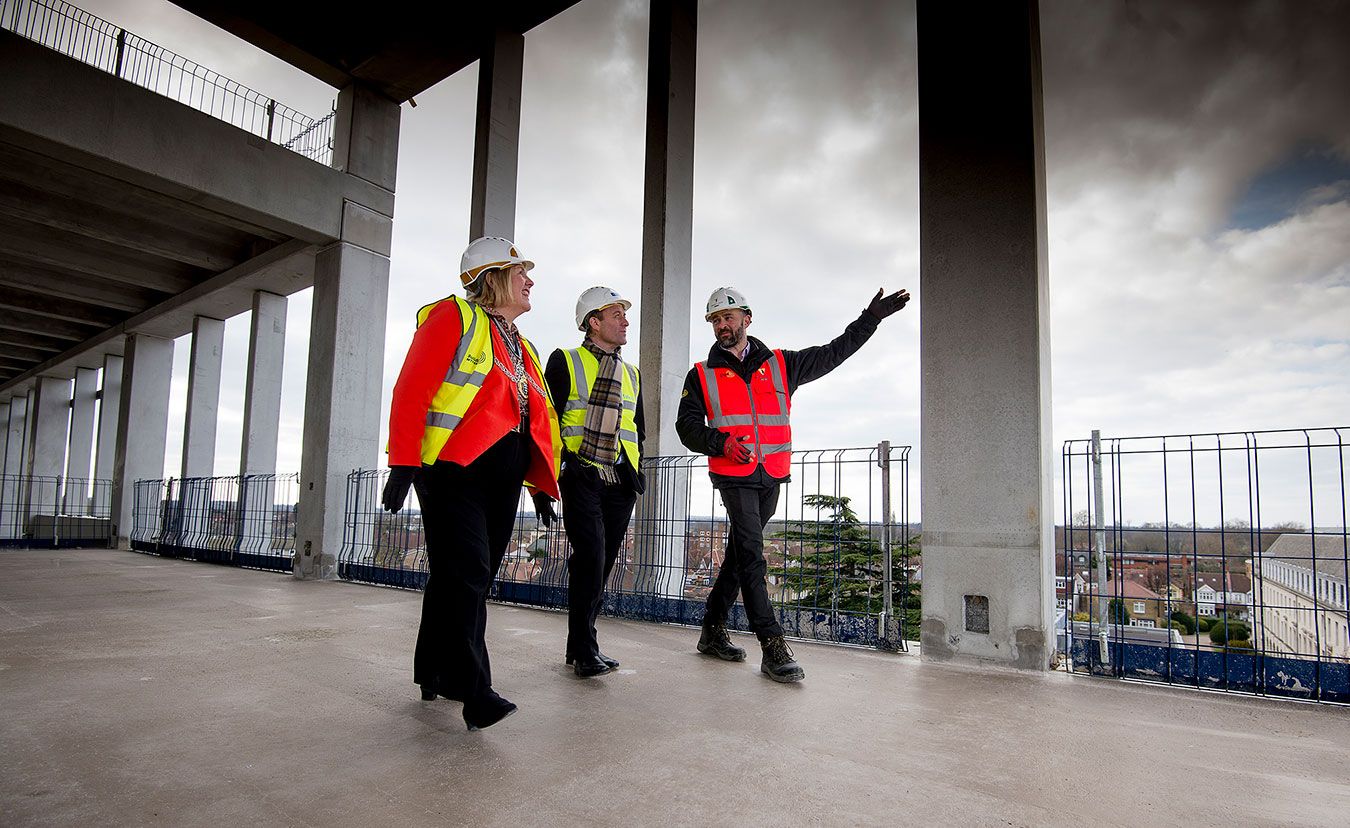