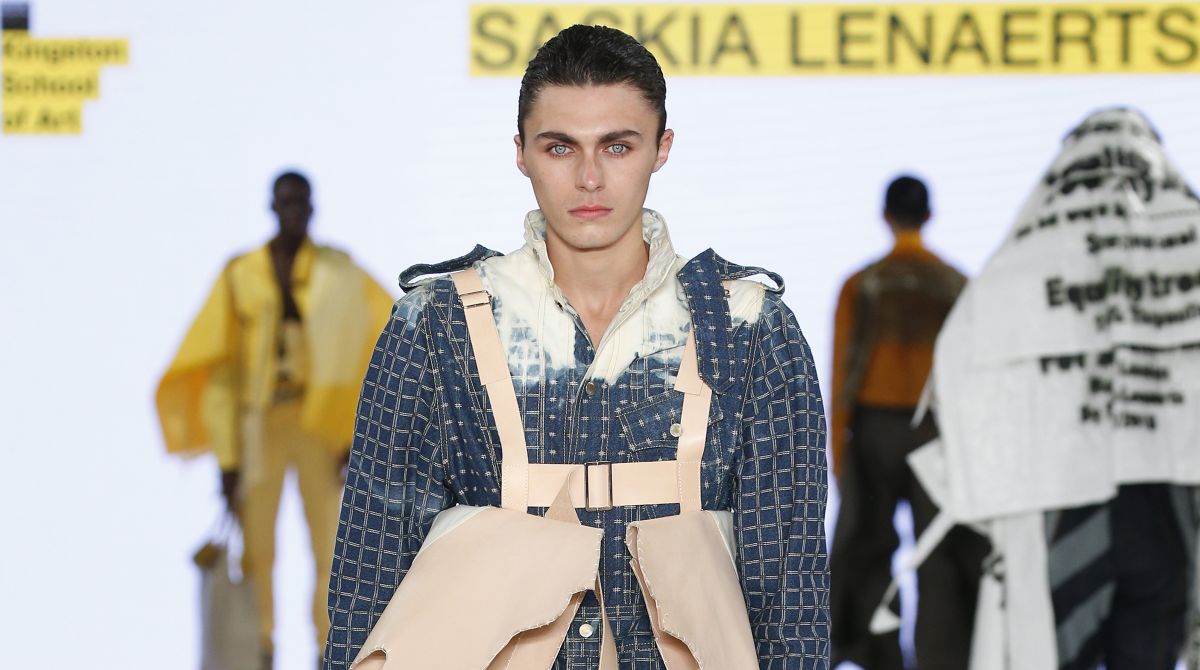 A Kingston University designer's menswear collection themed around repurposing and ethical fashion has won the Considered Design award at the annual Graduate Fashion Week extravaganza. Saskia Lenaerts was one of 24 young designers from the University's Kingston School of Art who showcased their garments on the catwalk at the Old Truman Brewery in East London on June 5.

The 24 year old has now been recognised for her outstanding contribution to ethical and societal issues relating to fashion design after a panel of judges selected her collection as the winner of the prestigious event's Considered Design award, sponsored by Scottish luxury knitwear and cashmere company Johnstons of Elgin. She will receive a £750 prize as part of the award. The judging panel praised the sustainable development journey the designer's collection reflected, as well as the innovation shown in her work.

Saskia first came up with the idea for her collection after reading about the impact imported second hand clothing was having on the economies of east African countries. Weaving the ideas of repurposing and ethical fashion through her work, the designer, from Antwerp, Belgium, mixed cotton, denim and bleached leather fabrics which she paired with handbags made from old wooden rulers, a belt woven into measuring tape and rings made from bobbin cases.

One look features an overcoat made from a large tarpaulin sheet folded into squares and printed with clothing label-style messages, including "equality troops" and "100 per cent hybrid". "The idea of colonialisation and the effects it still has today is what really inspired my collection," she said. "I read about the Herero tribe in Namibia that wears Victorian-style clothing first introduced by missionaries in the late 1800s as well as 1930s military garments repurposed from their former German oppressors. 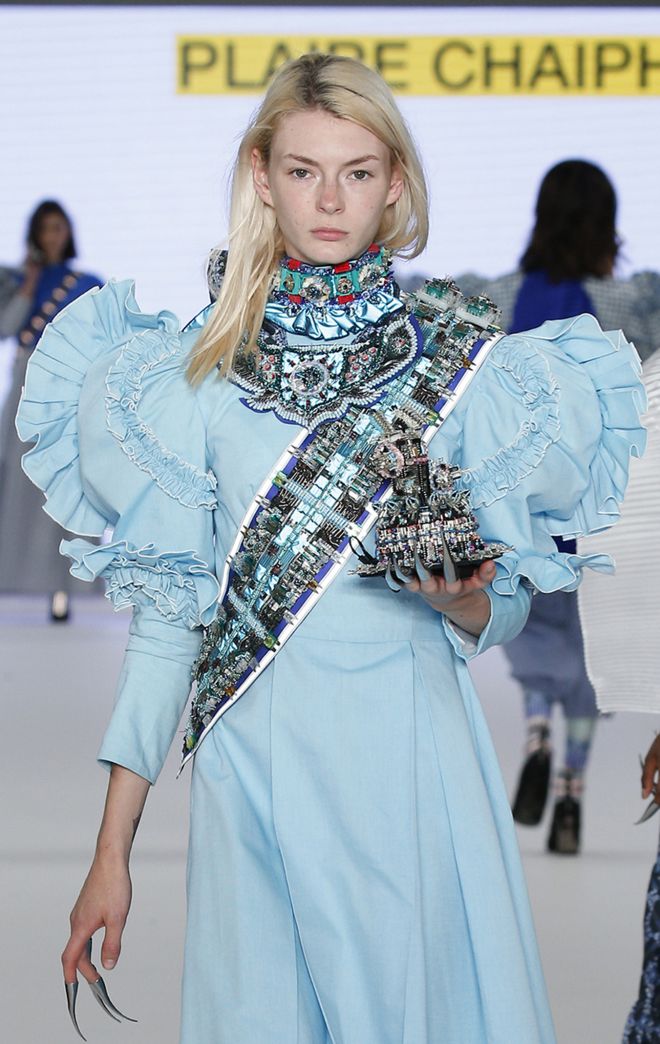 Plaire Chaiphet's royal cyborg crown, carried by the cyborg queen in her collection, won the Swarovski Sustainable Accessories Competition at Graduate Fashion Week."It's used in a symbolic way and it made me think about how we overcome our past and embrace the different parts that make us who we are. As a Belgian woman of Jewish descent, born in Hong Kong to a Belgian father and a half-Egyptian-half-Polish mother, that resonated with me and I wanted to create these garments that were all very different but when seen together had a certain cohesion."

Designer Plaire Chaiphet also went home with an award after winning the Swarovski Sustainable Accessories Competition at this year's Graduate Fashion Week event. Entrants had to demonstrate diverse and far-ranging ideas that pushed the boundaries of design and the concept of jewellery and accessories, with a strong visual or conceptual impact. Ten shortlisted designers were then given the opportunity to select crystals from Swarovski's upcycled programme to produce their pieces.

The 22 year old – originally from Phuket, Thailand – moved to Baldock in Hertfordshire from Bangkok at the age of 15 with dreams of becoming a fashion designer, and said her garments were a reflection of both her heritage and her future. 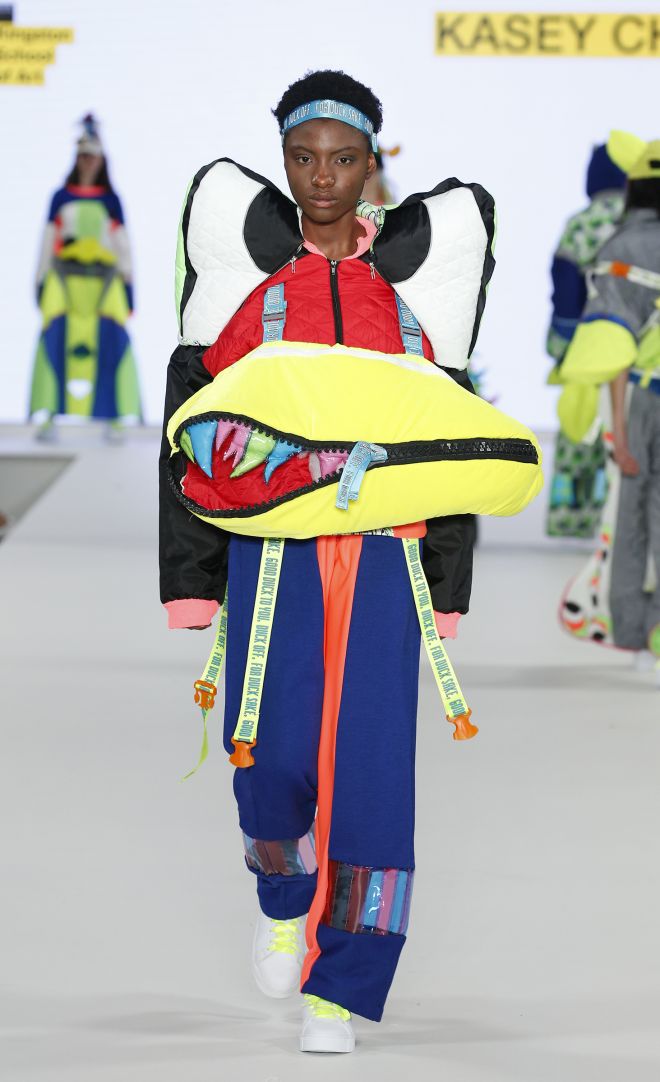 The darker themes in Disney's Donald Duck cartoon run through designer Kasey Chiu's collection, which features removeable beaks and eyes that become sleeping bags and duvets."The collection responds to the current political situation in Thailand and the struggles of our people, as well as honouring our beloved King Bhumibol Adulyadej, who died in 2016, and the good he has done in trying to tackle poverty and homelessness," she said. "The silhouettes are inspired by what the queen and princesses wore in the 1800s, combining our past with the future through the sci-fi aesthetic, using unwanted electronic components from my step-dad's workshop.

"The crown itself is an additional piece carried by the cyborg queen. I wanted to shine a light on Thailand and its culture through my work, as well as sharing my own heritage and the two sides of my life, so the collection is really a representation of me and my world."

Sustainability, ethical design and upcycling were at the core of many of this year's creations by the University's final year BA(Hons) Fashion students, whose menswear, womenswear and knitwear collections debuted on the runway in one of the most hotly anticipated shows of the annual fashion showcase.

Among the other designers showcasing their garments on the catwalk was Kasey Chiu, whose lifelong obsession with Donald Duck forms the basis of her womenswear collection, combining sportswear elements with fun, theatrical details that are an homage to the famous Disney character. Nylon trousers and jackets are accessorised with quilted waterproof elements resembling eyes, beaks with multi-coloured fangs and feet, which can be removed and used as sleeping bags, duvets and mattresses.

"I wanted to create garments that let people laugh about their lives and not worry too much," the 23 year old, who grew up in Hong Kong before moving to Sherborne in Dorset as a teenager, said. "I've always been obsessed with Donald Duck – I like the fact he's this character that's fun and humorous but there's a real dark side to him and the cartoon that you don't notice when you're younger." 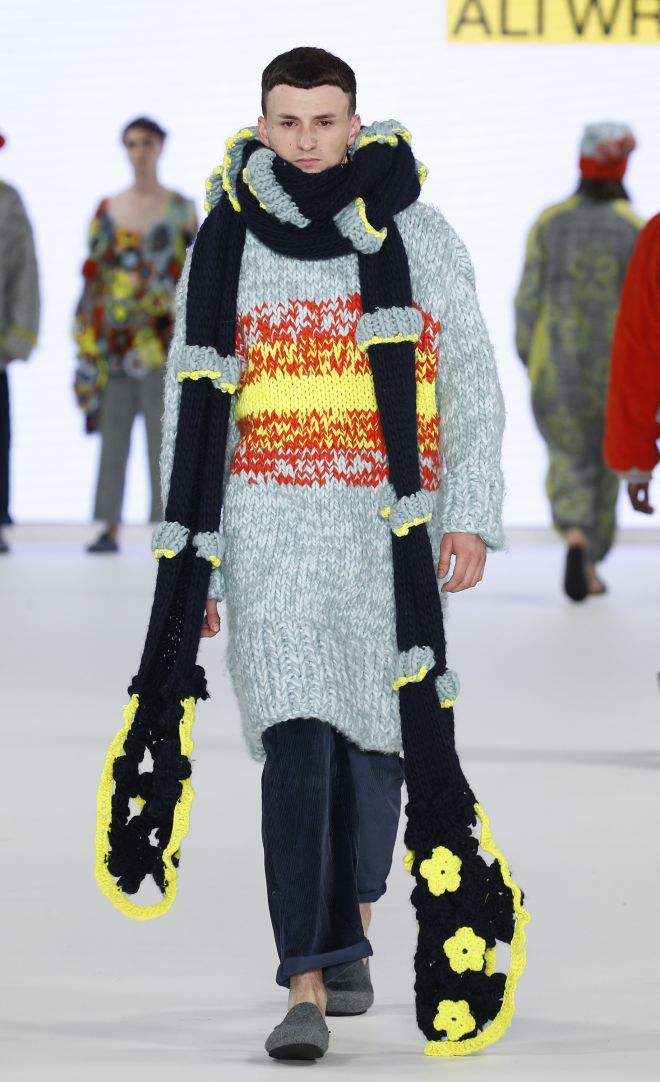 The calming influence of the natural world inspired Ali Wright's knitwear collection, which features brightly coloured crocheted flowers.Ali Wright's colourful knitwear collection is a celebration of how children connect with and learn from nature. Hand-knitting her oversized, woollen outdoor menswear pieces – which feature crocheted flowers made from coloured yarn and brightly coloured bobble hats and balaclavas – the 22 year old from Launceston, Cornwall, said the large silhouettes were inspired by the idea of children throwing on their parents' clothes in the rush to run outside and play.

"When I'm surrounded by the natural world I find it really calming and the collection is a comment on how we are losing our connection to nature as a result of technology," she said. "I asked a group of children to draw pictures of nature and used the shapes they came up with in the chunky knit of my garments – you can see the stitches, like mistakes in a child's sketch."

Head of Fashion Associate Professor Elinor Renfrew said this year's group of talented Kingston School of Art designers had made a huge impact on the catwalk at the prestigious industry event. "We have got a really strong group of students graduating from our BA(Hons) Fashion course and that shines through in the designs," she said. "Their work reflects the world we live in – embracing diversity, ethics and escapism through the fusion of craft and technology, which is taking Kingston in a new direction this year with some real surprises."