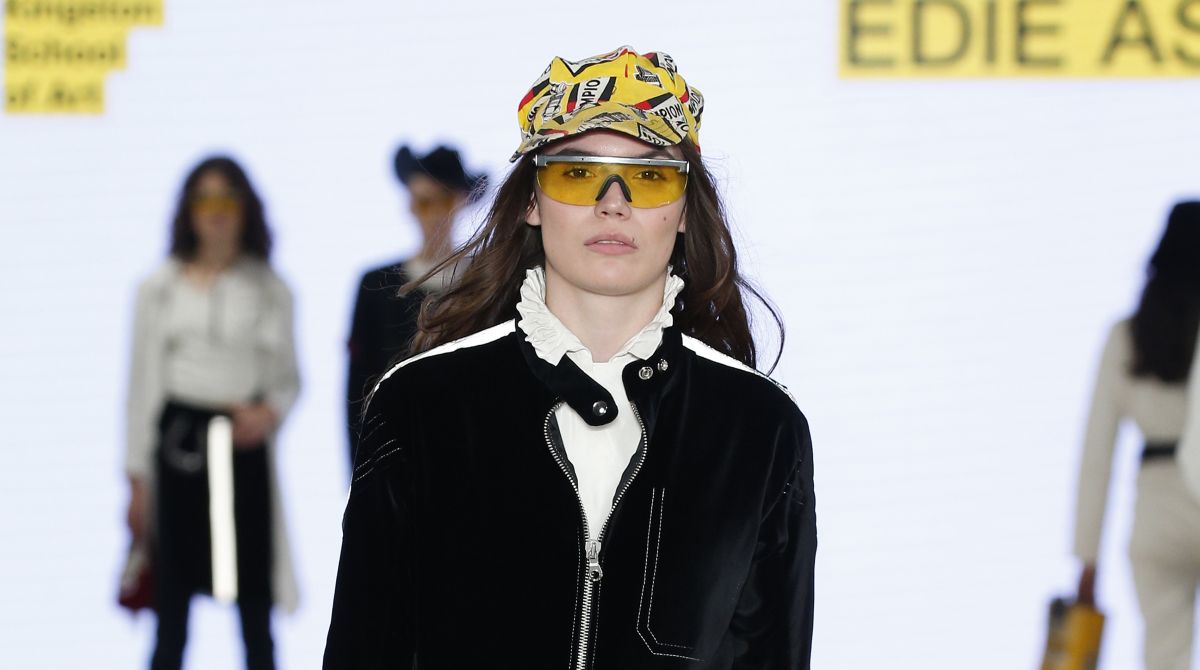 Victorian blouses and motorcycle jackets are fused in Edie Ashley's biker and cowgirl themed collection, which takes inspiration from the designs of her grandmother Laura Ashley and father Nick Ashley.

Third generation designer Edie Ashley has drawn on the fashion heritage of her family to create a deeply personal Graduate Fashion Week collection that acts as a love letter to her life growing up in rural Wales. Her mixed menswear and womenswear range incorporates two Victorian blouses as a tribute to her grandmother, Welsh fashion legend Laura Ashley, and Lancashire ploughman trousers based on a garment found in her designer father Nick Ashley's archive.

The collection made its debut on the Graduate Fashion Week catwalk at the Old Truman Brewery in East London, alongside the work of 23 other BA(Hons) Fashion students from Kingston University's Kingston School of Art. Taking inspiration from her parents' passions for horse riding and classic motorcycles, the 21 year old from Rhosgogh, near the Brecon Beacons, sourced exclusively second-hand fabrics from antique fairs and vintage markets around London to dress a group of characters she created called the Motopolis gang.

Reflective stripes run through the collection as part of the biker theme, which features elements including a cotton canvas mechanic's jumpsuit, a wrap blouse of 1920s wedding dress silk and a double breasted dress coat made of old linen flour sacking – elements that reflect the personal nature of her work. 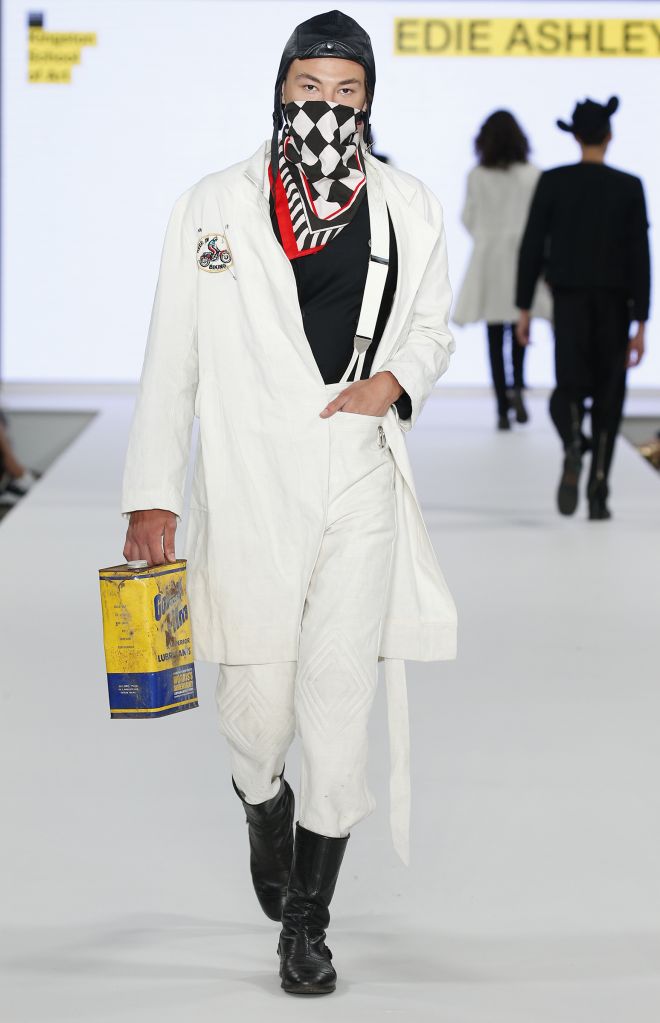 Edie Ashley created characters for her Graduate Fashion Week collection based around her parents' passion for horse riding and motorcycles."As a teenager I found all these old pictures of my parents and it made my world – the collection is kind of a union of those two forces in my life," Edie said. "My mother used to take me on bare-back horse rides after school and her love for animals really inspired my mentality as a designer, she showed me the importance and power of nature.

"I also spent a lot of time looking at documentary photography of rockers and punks, as my work is very character-based. While these garments are a real and honest reflection of me as a designer, I used a black and white colour scheme so the outfits act as a blank canvas for the wearer, encouraging them to put their own final touch to the pieces through accessorising or customising."

While she never met her grandmother, Edie grew up hearing stories about the renowned designer and businesswoman, who she hopes would be proud of her foray in to the industry. "I definitely think my use of second-hand, surplus or unwanted materials and the ethical and environmental concerns that inform those choices is something she would approve of," Edie said. "I've heard stories of how she used to look after everyone in the factory like they were her own children and that personal touch resonates with me. She's very close to my heart even though I never met her. "I like to think she would be proud of what I've produced and probably have a giggle with me over a cup of tea while we went through my designs."

Collaborating with her father, menswear designer and Private White VC creative director Nick Ashley, is something Edie would love to do in the future. "My dad has been so supportive and has really encouraged me to be a designer," she said. "He followed in his mother's footsteps and now I'm following in his. He's taught me about wrapping the body, draping and a less-is-more approach and it would be great to work with him.

"Two of my characters are wearing a garment I call the moto-vic blouse – which combines a motorbike jacket with a Laura Ashley-style Victorian blouse – and that's really a tribute to him and my grandma, a sort of thank you for leading me down the right route," she added.

Tutor David Frizzell said Edie had a clear, personal vision which made her designs stand out from the crowd. "Coming from a fashion background, Edie's equipped with the kind of research skills and influences designers really need – she's very creative and has this bold, personal identity that matters so much in this industry," he said. "She's as interested in who people are and what they do as much as what they look like. The environment matters a lot to her and that is reflected in her clothes, with all her materials acquired, found or passed down to her. That conscientiousness about fashion and consumption is so relevant today."