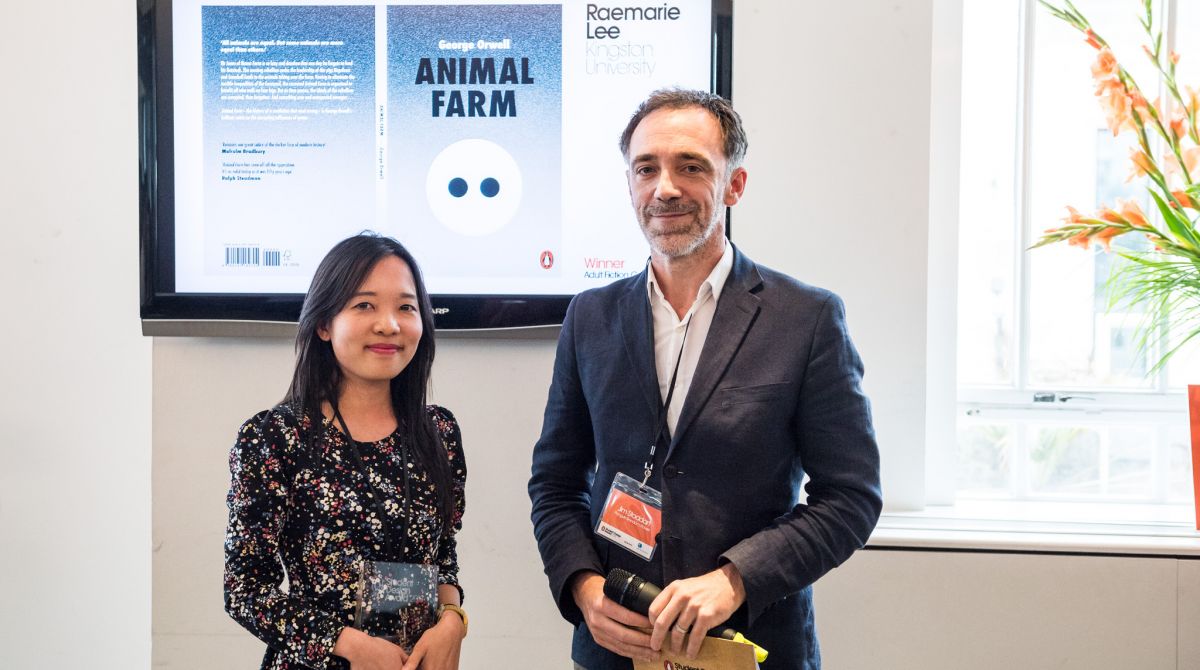 A song that teaches children how to draw animals has proved to be the inspiration behind a Kingston School of Art designer's winning entry in the prestigious Penguin Random House Student Design Award. Raemarie Lee, who is studying MA Communication Design: Graphic Design, has won the publishing giant's adult fiction cover award for her bold interpretation of George Orwell's classic satirical novel Animal Farm.

Raemarie, originally from Singapore, explained how the minimalistic design was inspired by a song her mother sang to her when she was a child. "When I first thought about the animals in the book, I was transported back to my childhood and recalled a simple song I learned about drawing pigs," she said. "The image of the snout on the cover of the book matches the instructions of the first line of the song - ‘small circle, small circle, big circle'," she explained. "I employed basic shapes to create a symbol which, in the context of Animal Farm, is clearly recognizable as a reference to the story's central characters."

The 32 year old postgraduate student came up with the concept after deciding to try to reference the themes of the book without overtly addressing images of animals or the communist subtext. "I thought a minimalist approach would suit the novel - there is a certain look and feel expected for Animal Farm that I wanted to subvert," she said. "The snout in the design is set against a sombre, stone-like texture that calls to mind the brutalist style often associated with communist architecture."

Raemarie's proposal was selected from more than 2,100 entries, which were whittled down to a shortlist of 10 in three categories by judging panels consisting of art directors from across Penguin Random House UK and guest judges from the design and publishing industry. As well as winning £1,000, Raemarie has landed a four week work placement, working on live briefs at the Penguin Random House design studios. 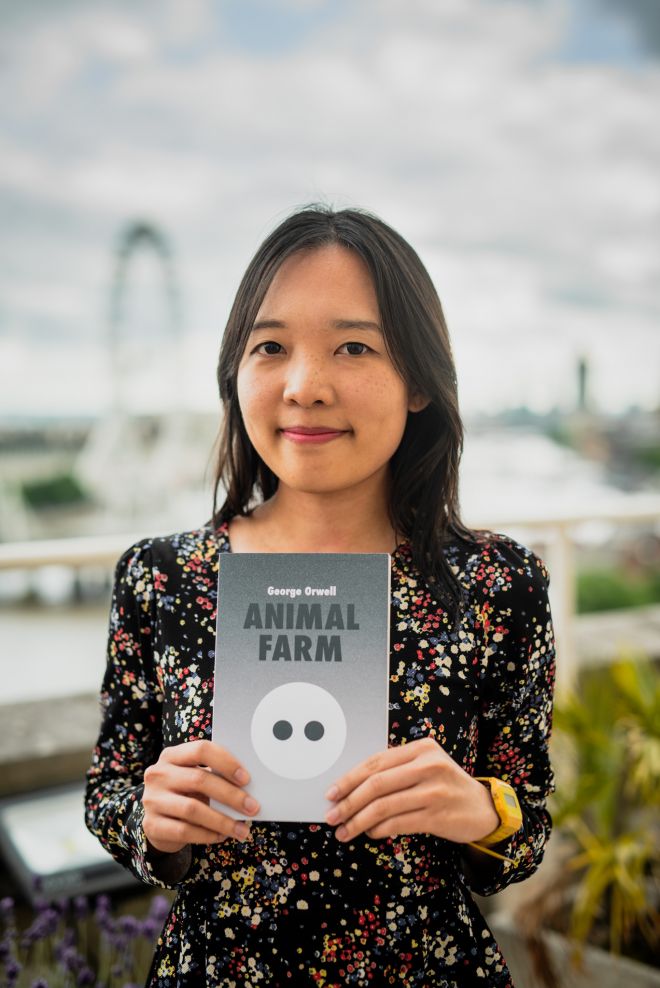 Raemarie Lee with her award-winning cover - picture credit: Al RichardsonThe panel praised the design, calling it a brilliantly original take that was modern and intriguing while conveying a soft, playful quality mirroring the fairy-tale aspects of the book. Joanna Prior, managing director of Penguin General Books described the cover as "a bold, confident design that pares back the book into a single image that is both graphic and representatively strong".

It is the second year in a row that the Penguin adult fiction cover award for design has been won by a Kingston School of Art student and the fourth year in a row the School's students have made the shortlist. Last year's award was won by Illustration Animation BA(Hons) student Madalyn Farley, who designed a cover for Harper Lee's To Kill a Mockingbird which used the lines on the palm of a hand to reveal the book title and author name.

MA Graphic Design course leader Clare Conway said Raemarie's design created an instant connection with the audience, delivering an iconic cover that stood out from the crowd. "As soon as I saw it I knew there was a great chance Raemarie would win," she said. "For a cover design to draw you in, it has to stand out – and, in its simplicity, her iconic stripped-back image of the pig snout does that in dramatic fashion."

Having originally trained in social sciences while in Singapore, Raemarie described how she had learned new ways of working since starting her studies at Kingston School of Art, with the close relationships between students fostering a supportive environment to develop their creative talents. "On the course we are really encouraged to experiment and make our own explorations within design," she said. "Everyone comes from different backgrounds and, together with our tutors, we discuss projects and help each other. I've learned so much from all of them."