A love affair with memory 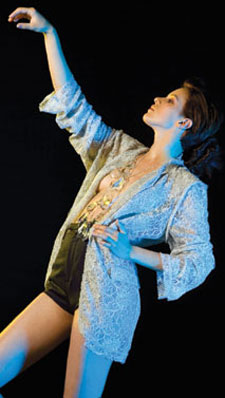 Stacey is the great-grand-daughter of Anthony and Mary Ellen O'Donovan, who jointly owned the Danus clothing factory, one of the largest employers in Limerick, Ireland. Her father, Roy Grant, became a master tailor and trained in Savile Row. In 1991 he had a stroke and, though he has made a good recovery, the resulting memory loss meant he was unable to continue his work. The family had to sell the business and abandon tailoring. "It might have been different if my siblings or I had been older when it had happened. But I was just six years old so there was very little the family could do," Stacey said.

Knowing the hard work that had gone into them, Stacey's mother kept her husband's patterns in the hope that they could be put to use one day. Now Stacey has used them to inspire her new womenswear collection, even digitally printing the notations from one of them on to her own jackets. His handwriting can be seen on the lapels and in several places there are spots which represent wax splodges. "We didn't have any lights in our loft when we were kids so when Dad went to find things up there he'd take a candle and there are still drops of wax on some of the patterns," Stacey explained.

Reflecting on her father's stroke and its impact on her work, Stacey said: "My love affair with memory stems from an observation of its fragility and propensity to diminish".

To assemble her designs, she got in touch with one of Dublin's best known upmarket men's tailors, Louis Copeland and Sons, as her father had worked with the company. She will be exhibiting them as part of Kingston University's catwalk show at Vauxhall Fashion Scout which will be held at Freemasons' Hall on Friday September 17, during London Fashion Week. 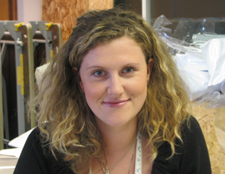 When Stacey became interested in garments, she decided to learn how to tailor. She studied textbooks and started taking apart suits she had bought at charity shops to study the stitching. "I had to teach myself the skills that he would have been able to show me himself," she reflected. "By looking inside the clothes, I could see all the tailoring techniques and start to repair the broken lineage."

Stacey graduated with a first class honours degree from Limerick School of Art and Design. While there, she took a sabbatical and worked in India as Assistant Designer at Ashish N Soni, creating garments for New Delhi Fashion Week. She was a finalist in the 2009 Nokia Young Fashion Designer of the year awards in Dublin and has designed costumes for the theatre.

Her potential was spotted by Kingston University's MA Fashion course director Nancy Tilbury, who describes her latest collection as "unreservedly beautiful". "Stacey has combined the history of craftsmanship in her family with her own desire to be innovative," she added. "I found it very moving to watch her transform her father's menswear from the sixties and seventies into contemporary fashion art." 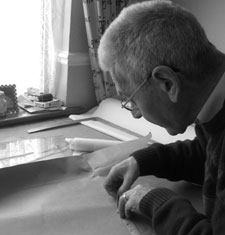 Stacey's great-great grandparents opened their tailoring factory in Patrick Street, Limerick in 1918, making 12 suits a week. They were joining a booming industry: one Limerick firm, Taits, had supplied the uniforms for the Confederate army in the American civil war. The O'Donovans' business expanded: a factory opened in 1936, the 'Danus' trademark was established in 1947 and they moved to larger premises in 1953. But the last twenty years have seen large scale clothing manufacture contract sharply in the face of cheap imports from the developing world.

Stacey hopes both her parents will be able to attend Kingston University's catwalk show at Vauxhall Fashion Scout and said the eight looks she was exhibiting all paid tribute to her father's trade. "Stitches that are normally unseen, pad stitching, taping and handmade shoulder pads are all visible. What once was hidden is now revealed, inviting the observer and the wearer to appreciate the beauty of the tailor's craft," she added.