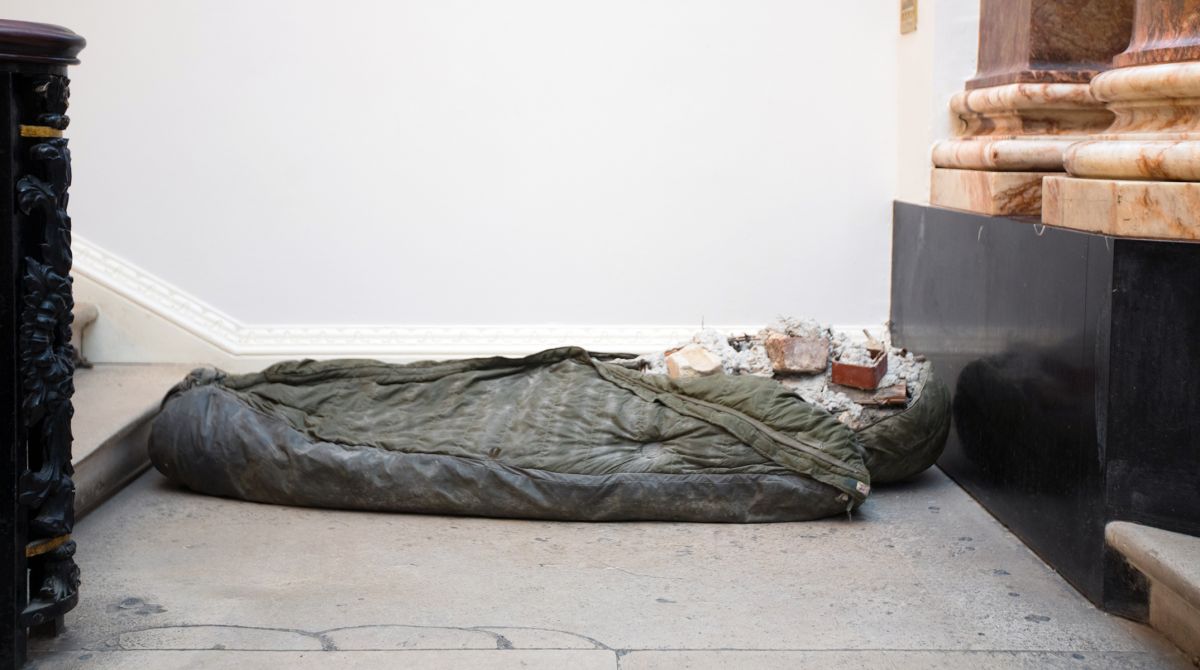 A Kingston School of Art professor has won the Royal Academy of Arts' prestigious £25,000 Charles Wollaston Award for a rubble-filled sleeping bag that was placed on the eminent art institution's main staircase. One of the most significant prizes for art in the United Kingdom, the award is presented to the most distinguished work in the Royal Academy's Summer Exhibition.

Sculptor and installation artist Professor Mike Nelson was presented with the prize for his work Untitled (public sculpture for a redundant space). He created the prototype ahead of a series of installations for the High Line – a 1.45-mile-long elevated linear park in New York.

The transfer of the context of the work from an urban American setting to one of London's grandest buildings could have been considered a risk. However, the sleeping bag, filled with rubble and discarded concrete from a building site near Professor Nelson's studio in Crystal Palace, made a big impact on the judging panel. "I worked as a builder when I was younger," Professor Nelson explained. "When you're building there is always a surplus of plaster or concrete. Builders fill the old sand bags or cement bags with the residue before throwing them away."

Professor Nelson almost didn't submit the piece for the exhibition because he didn't want the work to be interpreted as inappropriate or trite. "The resulting object is something rather more loaded than a cement bag full of concrete," he said. "As a sculptural object, it has a sarcophagus or mummy-like sense. When you look into it, the suffocating rubble within represents the sense of loss in the modern world's processes of production, especially in the housing market." 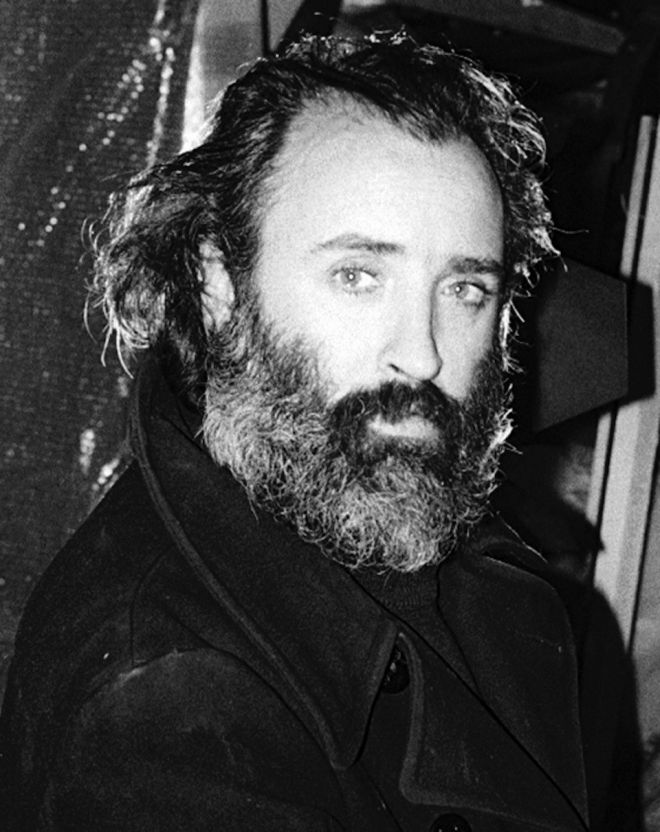 Professor Mike Nelson - photo credit Jamie MorganBest known for creating large scale sculptural buildings, including a major work produced for the British Pavilion 2011 Venice Biennale, Professor Nelson has also been nominated twice for the Turner Prize and was elected to the Royal Academy in 2013. "I'm quite particular in my way of working and enjoy the physicality of working things out," Professor Nelson said. "When I look at a piece, I can remember the time I spent making it – that was part of my life, maybe three months living in one place, working every day. That time is reflected in the piece. It might not matter to everyone, but it matters to me."

Professor Nelson, who joined the University in 2012 teaching first year students right through to postgraduates on a one-to-one basis, believes Britain's art schools are one of the greatest cultural gifts it has given to the world. "Fine art has incubated artists that go on to be successful in theatre, music, film and everything in between," he explained. "Teaching is an education for me as well as my students. I get a feel for the next generation, how their heads are working, what they're reacting to and how they're making sense of things, which is often very much at odds with how I think."

Looking back on his life as an artist, Professor Nelson offered his advice for the next generation of creators. "For years I travelled with a couple of big boxes of tools to places around the planet, making things on site," he recalled. "My earliest works are very much responses to the site, the place and perhaps a historic moment. The dexterity of a person's mind in their 20s and 30s is quite incredible. Young artists should keep their vision pure and pursue it for as far as they can take it."

Head of Department of Fine Art associate professor Amanda Ure said Kingston School of Art students benefited greatly from Professor Nelson's knowledge and feedback in tutorials during the year. "Mike's international reputation in his field and continued support for art education is hugely valuable in raising aspirations and promoting confidence amongst our students," she said. 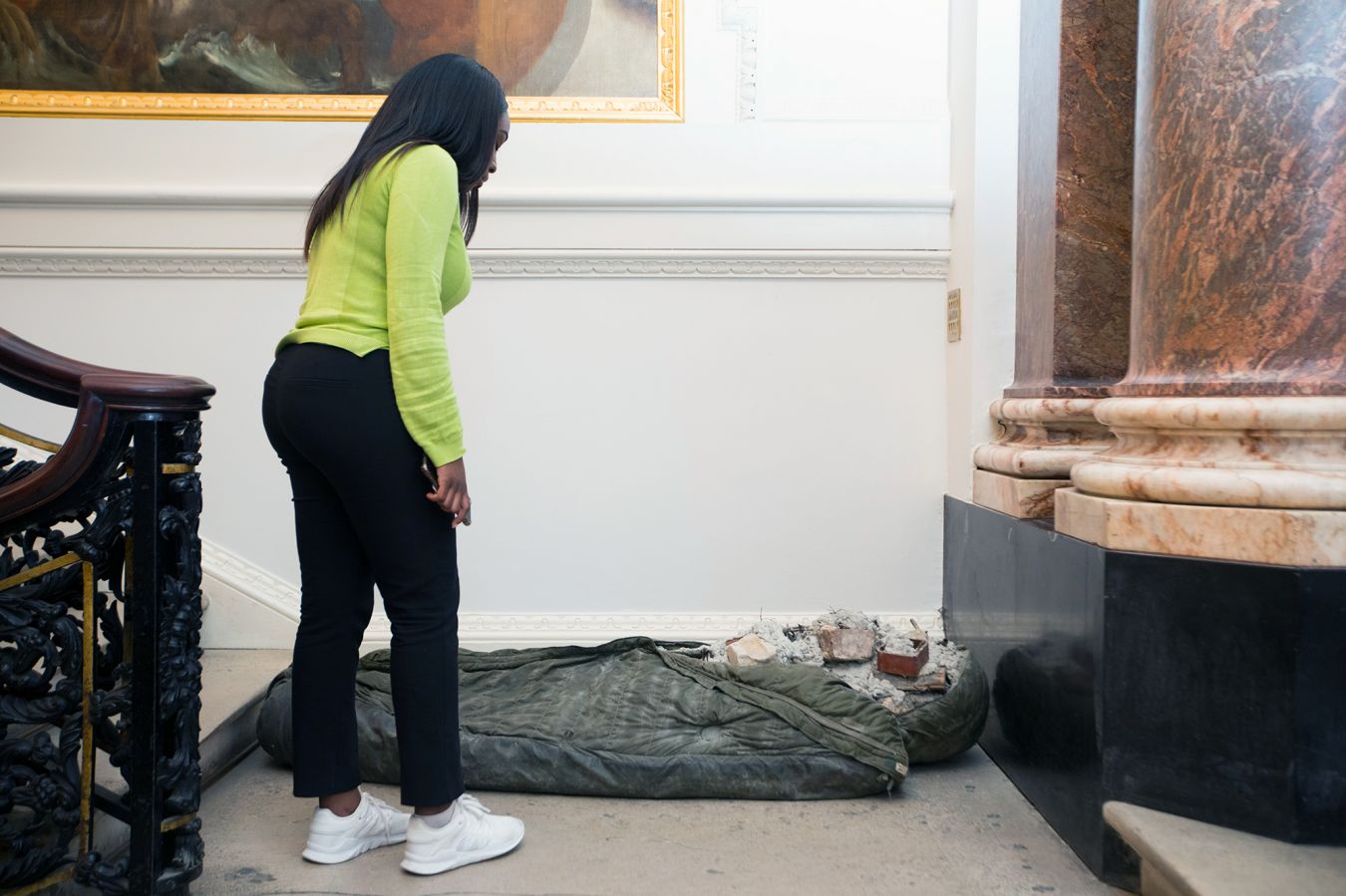 The rubble for the award-winning piece was collected from a building site near Professor Nelson's Crystal Palace studio.