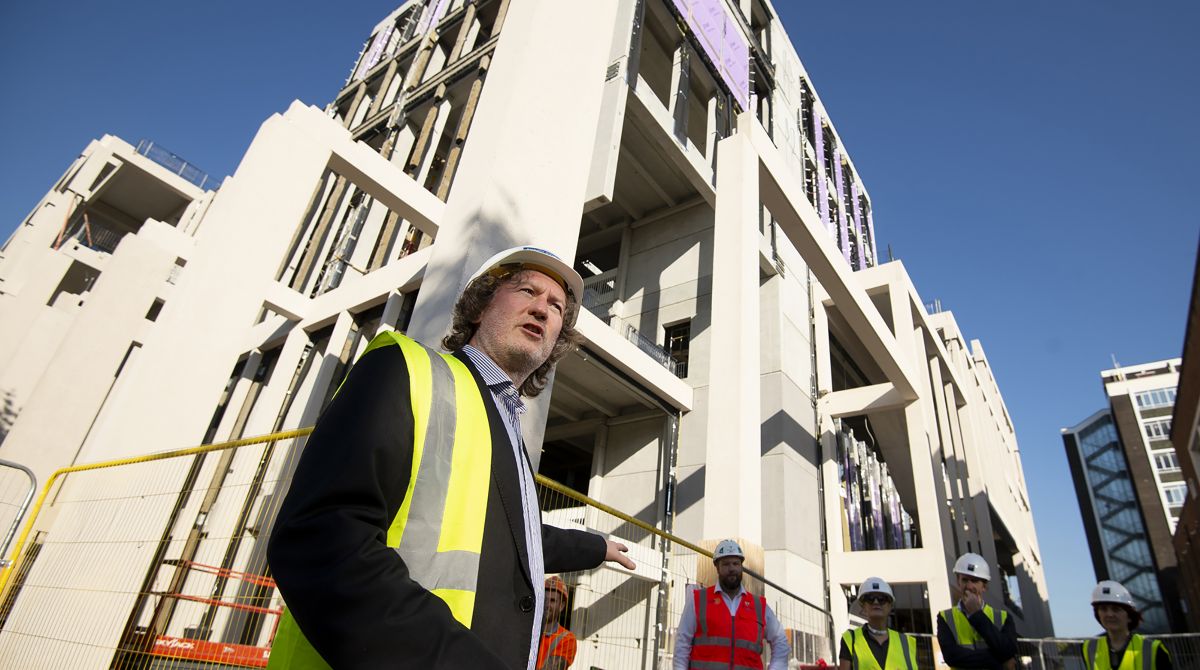 Guests at the event held to mark a year before the landmark building opens were able to take a tour of the Town House site.

Kingston dignitaries, including the Leader of the Council Liz Green and Kingston Mayor Thay Thayalan, have joined with more than 100 other town stakeholders, borough councillors, residents, staff and students at an event to mark one year to go before Kingston University opens its landmark Town House building.

Town House, due to be completed in 2019, has been designed by RIBA award-winning and Stirling Prize-nominated, Grafton Architects. It will provide a new focal point for Kingston University and transform the learning experience for students. It is being built by Willmott Dixon – an award-winning national contractor with a track record of delivering multi-million pound commercial and public projects, particularly for the education sector.

At the celebratory event, guests were given the chance to take tours of the building and were able, for the first time, to walk up the main staircase. They were accompanied by University Vice-Chancellor Professor Steven Spier, founding director of Grafton Architects Shelley McNamara and managing director of Willmott Dixon Roger Forsdyke.

Professor Spier said the event celebrated the momentum towards occupying the building which would be at the very heart of Kingston. "Town House will have a state-of-the-art-library but also, more unusually, performance spaces and cafés which we hope will be attractive for local residents," he said.

The connectivity to the town centre had been built in to the architecture and building programme of Town House Professor Spier said. "Being a civic university is as a key part of what we are and the Town House, quite literally, has been designed to help cement that relationship," he added "We're partnering with the Council, Kingston First and the Greater London Authority to improve Kingston's amenities and Town House – which I believe will be the best structure built in the borough since the war – will be a big part of that." 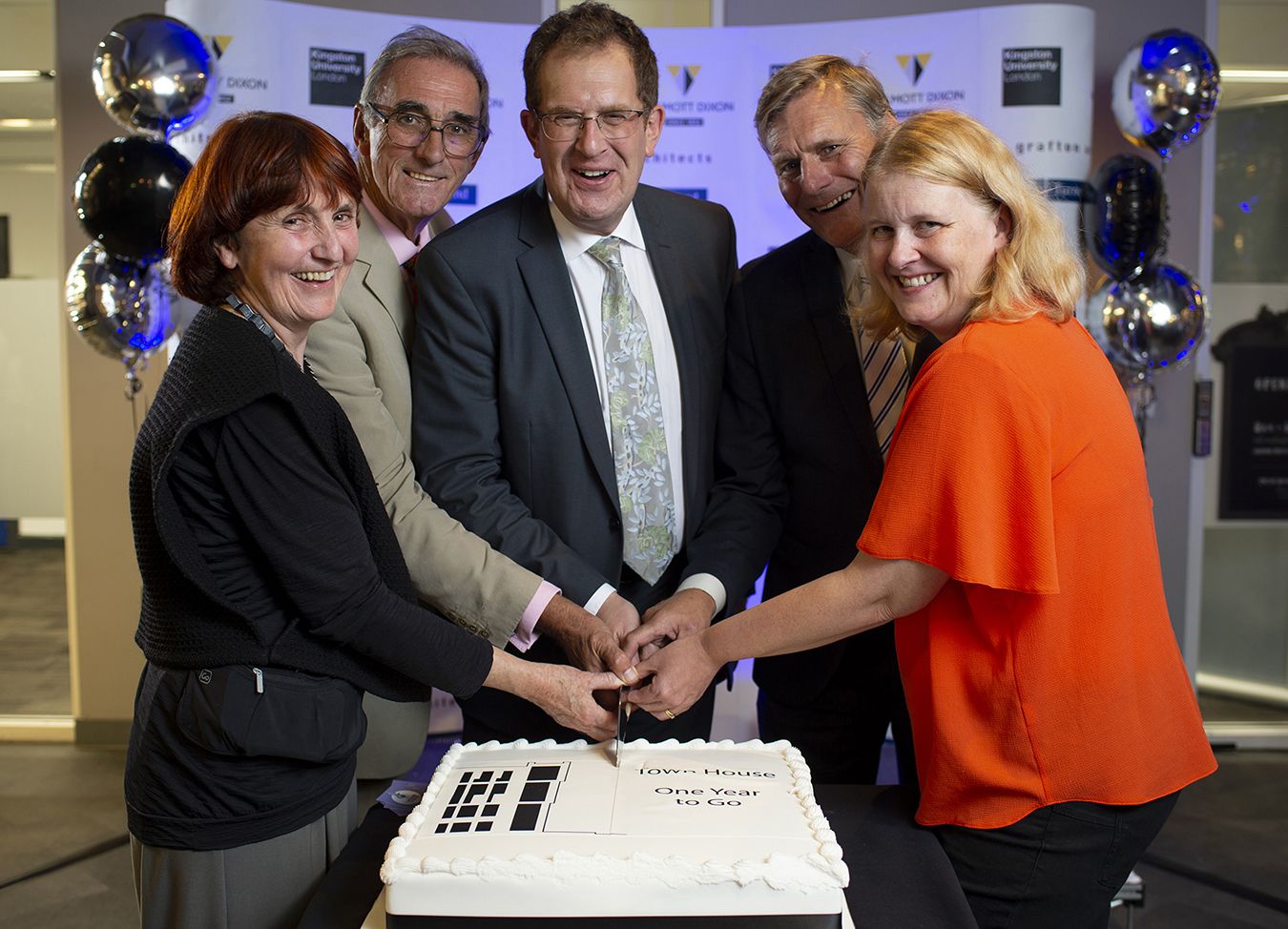 The building was already bringing a lot of benefits to the community during its construction thanks to the partnership with Willmott Dixon, Professor Spier added. "We're creating education opportunities through the employment skills plan utilising our links with schools and colleges in the region," he explained. "Additionally, the Building Lives Academy programme – launched by Willmott Dixon in conjunction with Surrey County Council and South Thames College Group - will help unemployed young adults in Kingston get a foothold on the construction industry career ladder."

Leader of the Royal Borough of Kingston upon Thames Councillor Liz Green said that it was clear everyone at the University was working hard with the Council, businesses and residents. "It is about that partnership because we all care deeply about Kingston, how the place looks and how it feels and we all want to continue to make Kingston better together," she said. "In Kingston we are no longer town and gown – we're town with gown."

A student officer from the Union of Kingston Students Whaqar Hussain said the Town House provided an opportunity to support students and to put them at the heart of everything. "It's great that as a Union we get to work with students to help turn what will be an amazing building in to an incredible asset both for the University and for the royal borough," he added.

In addition to getting a peek at the new building and being able to sample a Town House cake baked for the occasion, guests at the reception were also able to take part in constructing an artistic representation of Town House. Individuals followed colour-coded sheets to put together 6.5cm squares each made up of 64 coloured Lego pieces which form part of a two metre-wide picture of Town House on Penrhyn Road. The picture, which is made-up of more than 750 of the 6.5cm squares, was begun by students in Freshers' Week and is expected to be completed ahead of the opening of the building. 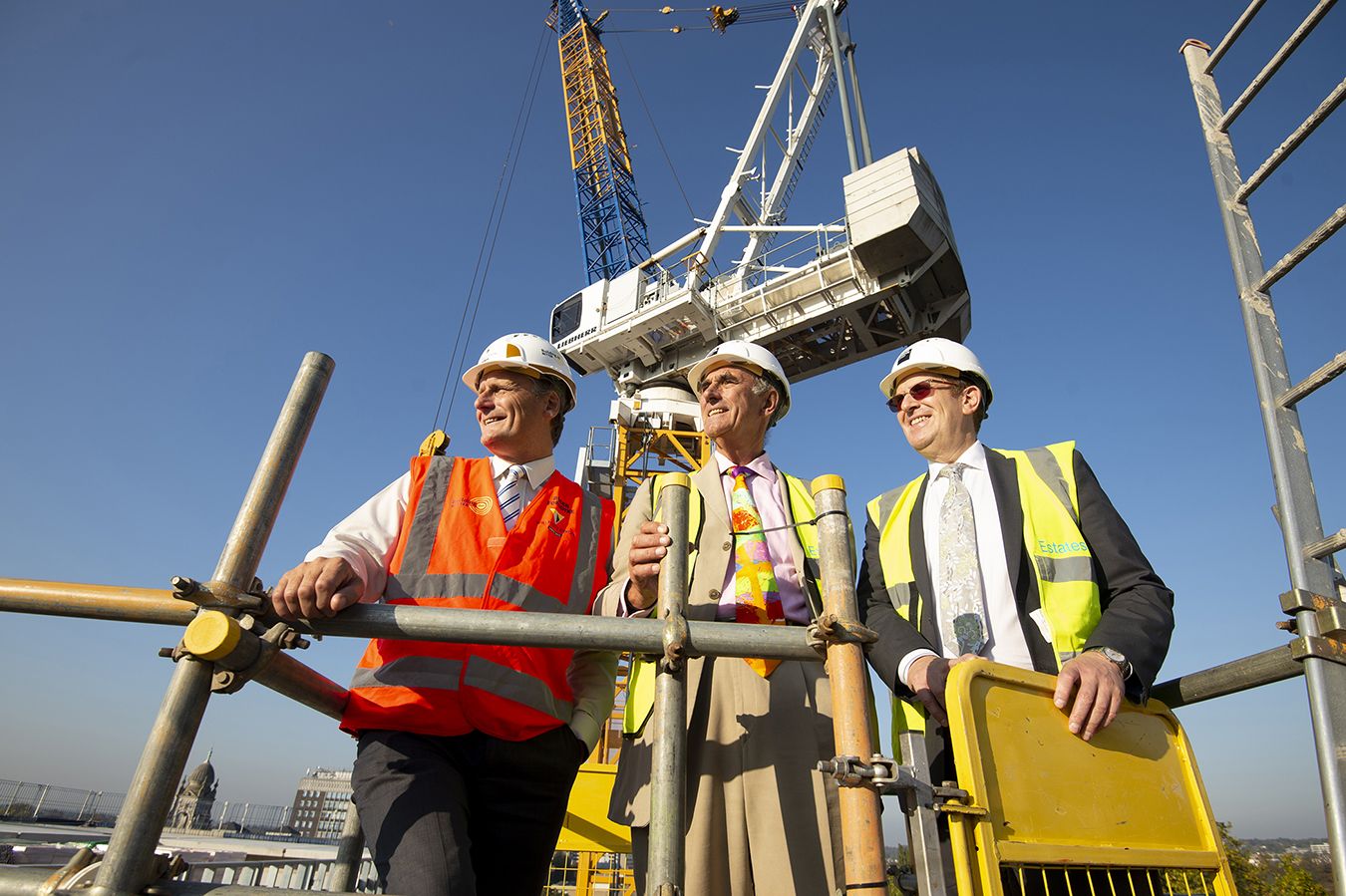 Managing Director of Willmott Dixon Roger Forsdyke (left), Chair of the University's Board of Governors David Edmonds (centre) and University Vice-Chancellor Professor Steven Spier took in the view from the top of the Town House building.