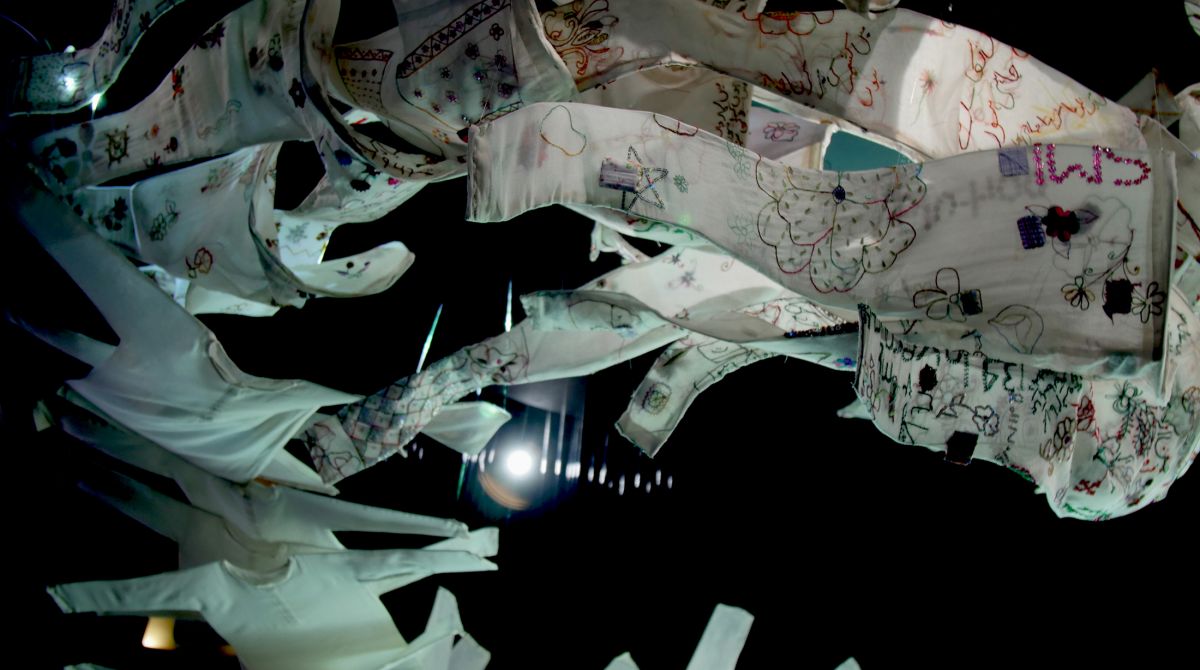 A Kingston University student has been inspired by the work of women in Pakistan's cotton industry and the experience of her multicultural children to create the Pakistan Pavilion as part of the London Design Biennale. The event saw some of the world's most exciting and ambitious designers, innovators and curators gather in the capital to show how design impacts every aspect of life.

MA Film making student Mariam Majid was one of a group of artists selected to represent Pakistan at the Biennale in response to the theme of emotional states. International design teams took over London's Somerset House for the exhibition showcasing a wealth of ideas and creativity.

Combining a fine art degree gained at National College of Arts in Lahore with her film making studies at Kingston School of Art, Mariam and her team created an immersive experience. Films shot on location in Pakistan were projected on to muslin garments made by women working in the country's cotton industry. "We started with the idea of using textiles and craft, connecting them to a sense of national identity," she said. "It had to represent Pakistan, highlighting strengths within the country. Pakistan is the fourth largest exporter of textiles in the world with products on high streets around the world."

The finished garments were hand stitched and embroidered. "We encouraged the female workers to embrace the emotional states theme, interpreting it to inform their designs," Mariam explaoned. "They reveal their hopes and dreams – all that is precious to them was documented in the form of embroidery."

Three films were showcased as part of the installation, evoking the atmosphere of Pakistan juxtaposed against documentary film of artisans working on the production of the embroidered shirts. Sound was also an important element of the pavilion. "We wanted to create an immersive and hypnotic experience so the audience would absorb the elements, allowing them to build an emotional connection," Mariam said. 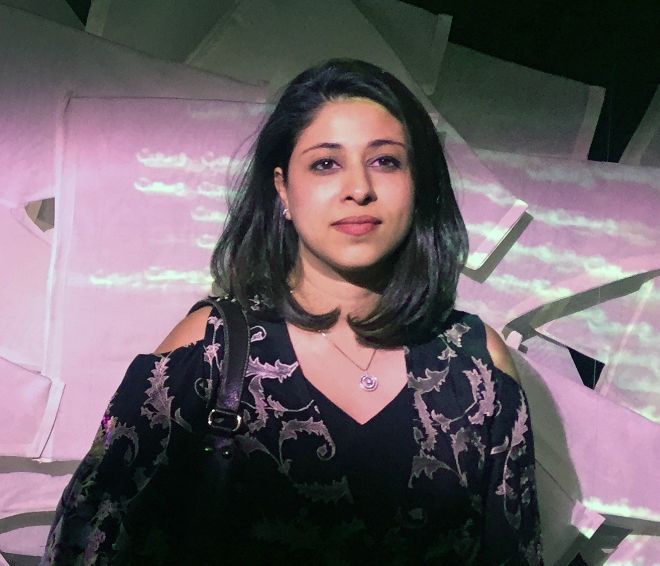 Mariam Majid graduated from Kingston University\'s MA film making with a distinction."We wanted to create a bridge – a place dialogue can take place between the United Kingston and Pakistan which have a strong historical link. The piece is about changing perceptions and changing ideas, moving forward together in to the new world."

Born in Pakistan, Mariam moved to London in her twenties before raising a family in the capital with regular visits to her homeland. "I have become a cultural nomad, existing between two countries," she said. "We go back very often and I relate strongly to Pakistan, while having my own place in England. I want my work to help a move towards a global culture. We need to build more of a human family – art, theatre and film are a great way to encourage the process."

She feels strongly that there is a lack of accurate representation of Pakistani culture within the media and hopes projects such as the pavilion can help build a sense of community for British Asians. "My kids are now at a stage that we, as parents, felt they need a strong sense of identity. We see that as a happy mix between British identity and Pakistani heritage. The pavilion is a celebration of cross-cultural identities. Nobody belongs to just one place any more. We belong to the world." she said.

Mariam studied part time over two years, finding the time between looking after her three children and  other creative pursuits. "I started to look for an opportunity to study when my youngest daughter was three. As soon as I saw the course it took me five days from finding it to applying," she said. "Film making can be very demanding, It was a steep learning curve and I have changed from the person I was two years ago. Going back to university has been a unique experience, I wanted to learn as much as I could – there are so many stories to be explored."

MA Film making course leader Abbe Fletcher said she had been struck by the arrangement of the cotton kameez shirts to form the projection screen for Mairam's films in the installation. "The shirts hanging above the screen, with their embroidered messages to visitors provided a powerful statement from the normally invisible female workers, creating a direct link to the audience," she said.

"The MA Film making at Kingston School of Art has an ethos of inclusivity and emphasis on developing skills for life-long filmmaking. Mariam's work has been consistently excellent. She is an artist first and foremost. I expect big things from her in the future – her artistry, drive and ambition could take her anywhere." 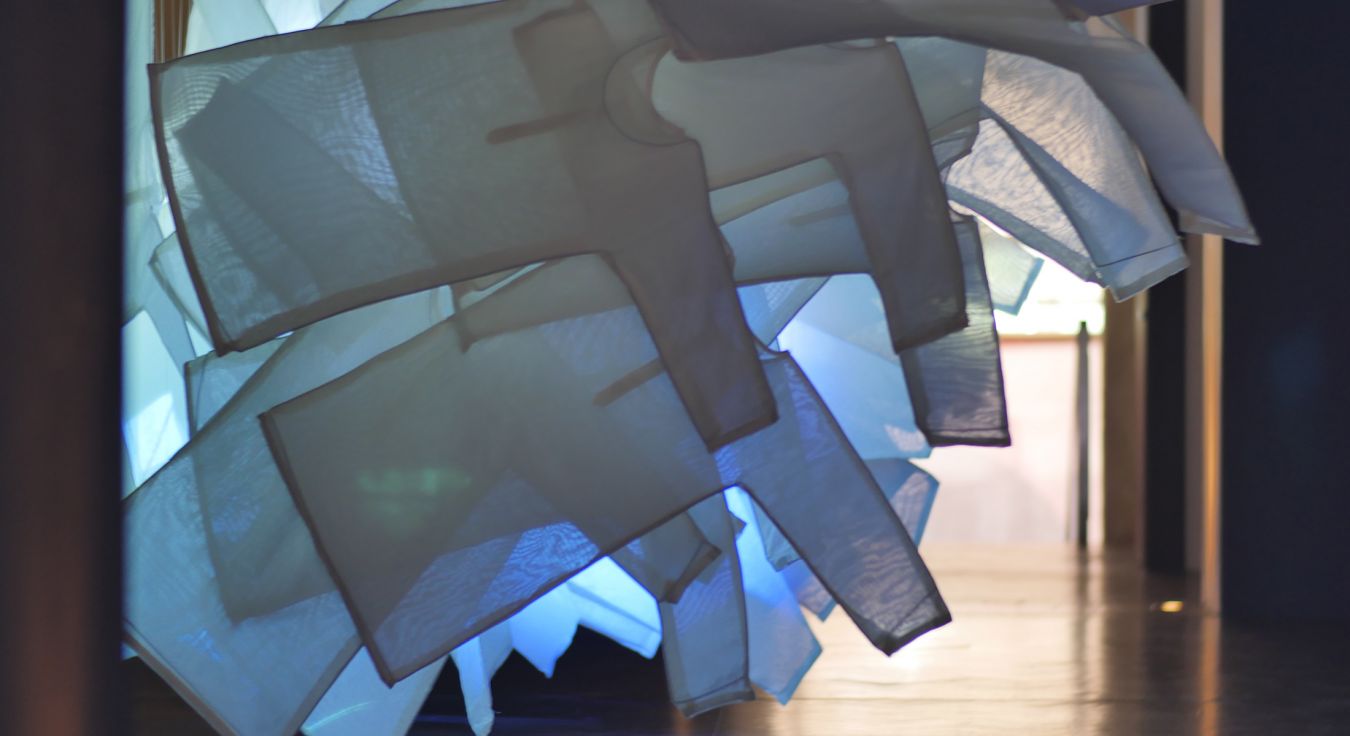 The installation was part of the London Design Biennale.