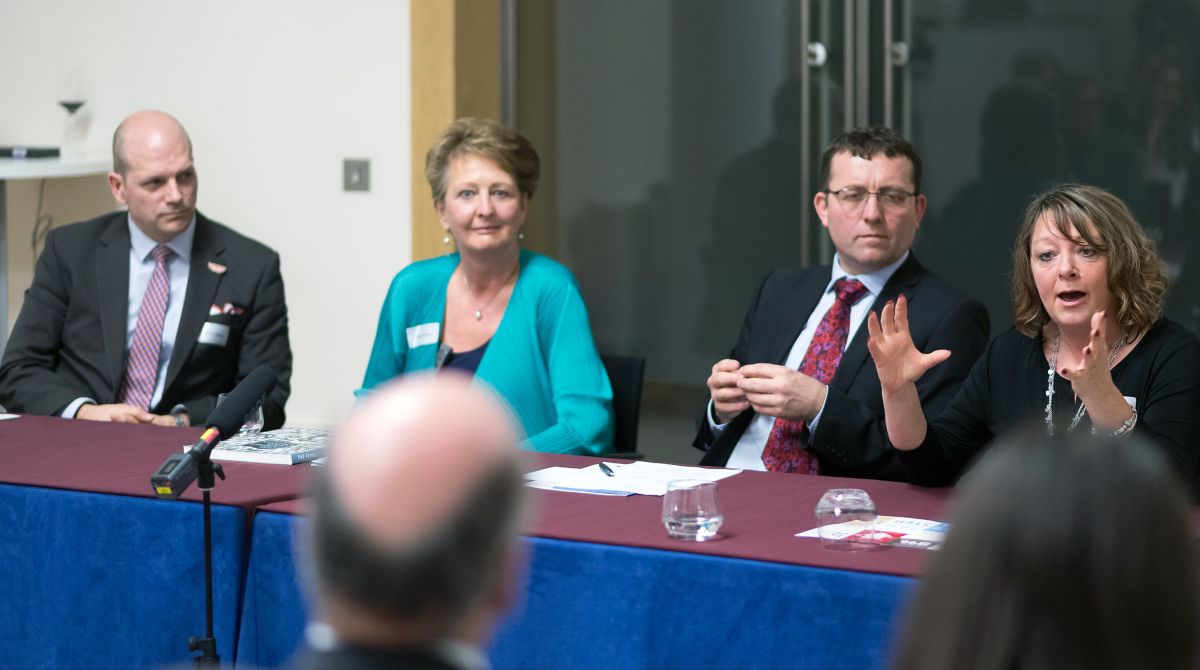 A panel of leading advocates for gender equality in the sciences discussed the reasons behind the underrepresentation of women in these subjects during a public event organised by Kingston University. Among the topics covered were the importance of role models, the cultural barriers to be overcome and the impact addressing the gender imbalance could have on closing the STEM skills gap.

Speaking to an audience of alumni and industry professionals at the Royal Academy for Engineering, the University's Vice-Dean of the Faculty of Science, Engineering and Computing Dr Lucy Jones outlined why empowering and inspiring young girls from primary school age was key to creating a pipeline of students that would help address the current shortage of workers across the sector.

"Unless we start to get it right now for these very young children, that skills gap is going to become too big to fill," she said. "This has to be a collective effort – agencies and universities need to come together to work with schools and professional bodies. Unless we get a nationally recognised strategic approach to tacking the disparity here then all of the individual efforts we make will just be a drop in the ocean."

The event was hosted by Pro Vice-Chancellor for Development and Dean of Kingston School of Art Professor Colin Rhodes, with Dr Jones joined on the panel by Dr Tim Slingsby, director of skills and education at Lloyd's Register Foundation, a leading supporter of engineering-related research, training and education, and Edwina Dunn, Starcount chief executive officer and founder of The Female Lead – a non-profit organisation dedicated to giving inspirational women a platform to share their stories.

Ms Dunn outlined the importance of having relatable role models to inspire young girls, citing her own research that had shown the difference in the types of people boys and girls follow on social media.

"I genuinely believe it's very hard to be what you can't see," she said. "If you don't see people you relate to, that look like you, who do things you admire, it's very hard to have the energy, belief, passion and commitment to achieve your potential. It worries me that the only definition of success girls are seeing is that of celebrity and fashion. One of the things I'm passionate about is changing girls' sense of belief. Ambition is almost considered a dirty word in a lot of society and that's worrying."

Universities also had a key part to play in demonstrating the possible career paths that could open up for them, Dr Jones added.

"One thing we've tried hard to do at Kingston University is making sure these young women have got role models that are reachable," she said. "That's why we do a lot of work with our student ambassadors going out to colleges, to sixth forms, to people thinking about their GCSE choices, with women in their first, second or third year or just starting a PhD. Female role models who are attainable, they dress the same way as these young girls, they talk the same language, they're going to the same concerts."

The way girls often come to believe they are less clever than boys from quite a young age was another concern, according to Ms Dunn, who received an honorary doctorate from Kingston University last year for her contribution to gender equality and women's involvement in STEM. "Girls actually get better GCSE grades in things like maths and physics than boys, but when asked if they are going to go on to study it they say they aren't, because they are not very good at it. Whereas boys think they are really good at it, but then don't actually do so well. It's an interesting phenomenon."

Dr Slingsby, a former science advisor for the British Council, explained why he felt looking at STEM in general was unhelpful and called for interventions to be focused on specific areas where actual skills gaps had been identified in order to deliver real progress.

"In specific 21st Century engineering roles, particularly work around data analytics, there is a huge skills gap – and, more often than not, the engineering profession is dominated by men. In contrast, in the United Kingdom every year we have 20,000 psychology students but there aren't that many jobs available," he said.

"So, let's focus on those areas where we have a real skills gap and in doing so, let's not ignore half of the population who could make a significant, talent-led and decisive change in those professions where those skills are needed."

The event was the first in a series of public ‘in conversation with' sessions organised by the University, which will cover topics ranging from increasing social mobility in higher education to entrepreneurship and the future of journalism.