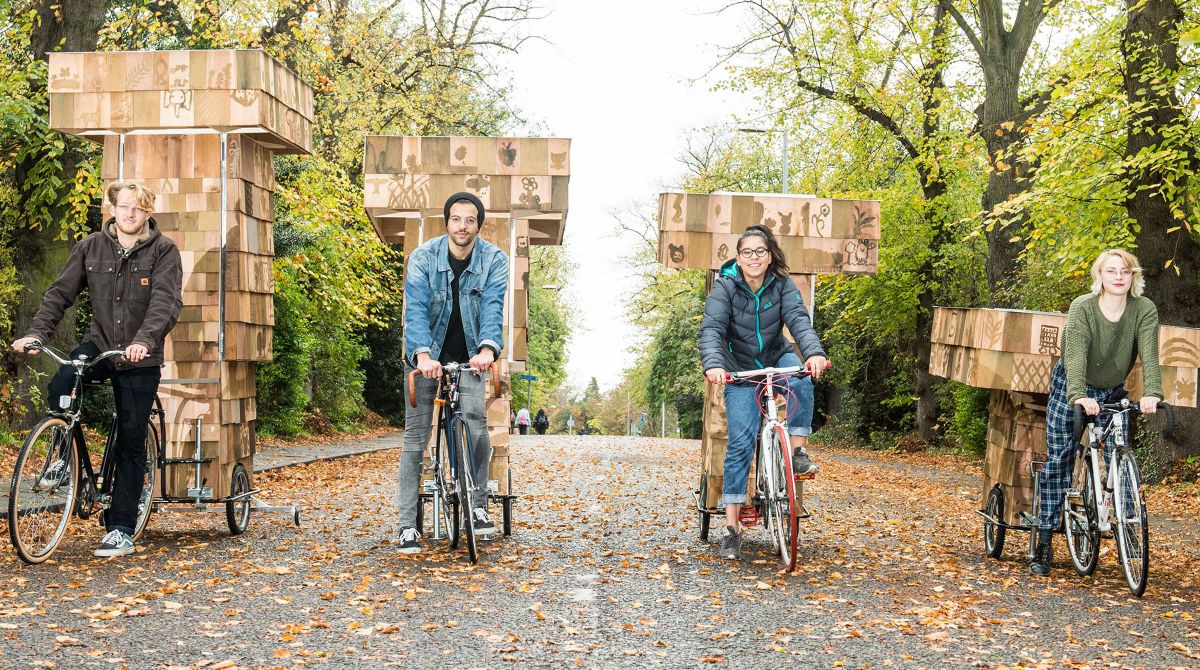 Kingston University students have designed and built green sheds as part of the SHEDx project with The Community Brain to help residents reimagine Tolworth and green urban spaces.

Kingston University students are working with Tolworth residents to transform the areas they live and work in as part of a creative community-led project.

From designing mobile gardening sheds to breathing new life in to Tolworth station, students from across the University are playing a key role in the two year scheme, supported by Kingston Council with funding from the Greater London Authority and the Heritage Lottery Fund.

Activities being delivered through The Community Brain's SHEDx project include green sheds designed and built by postgraduate architecture students that can be pulled by bicycle to transport plants, soil and tools to green urban areas across the suburb.

Striking posters created by graphic design students will go on display at Tolworth rail station, with further work set to be undertaken to bring the waiting room back in to use. Geography students have also played a key part in the initiative, interviewing residents to find out about their ambitions for the area and the types of events they would like hosted there.

"There are so many benefits to being part of the SHEDx project with The Community Brain – we are in the workshop three or four weeks a year, we get to bond as a studio and with the community and get to see the fruits of our labour at the end," second year MA Architecture student Darren Maskell said. "We also get to build new contacts and get another opinion on our work. We've had people from the project coming along to our critiques and giving practical advice from a different perspective, which has been invaluable."

Asking people who lived and worked in Tolworth to reimagine the areas around them had been the starting point for the venture, SHEDx project coordinator Georgia Neesham said.

"A huge amount of development will be happening in Tolworth during the coming years and we want people to dream about the spaces, both urban and green, they would like to see," she said. "Having Kingston University students help the community develop its vision gives everyone involved an opportunity to talk about their ambitions for the area."

Kingston Council and the Community Brain were awarded more than £380,000 for the project from the Greater London Authority's Good Growth Fund – a £70m regeneration programme to support growth and community development in London.