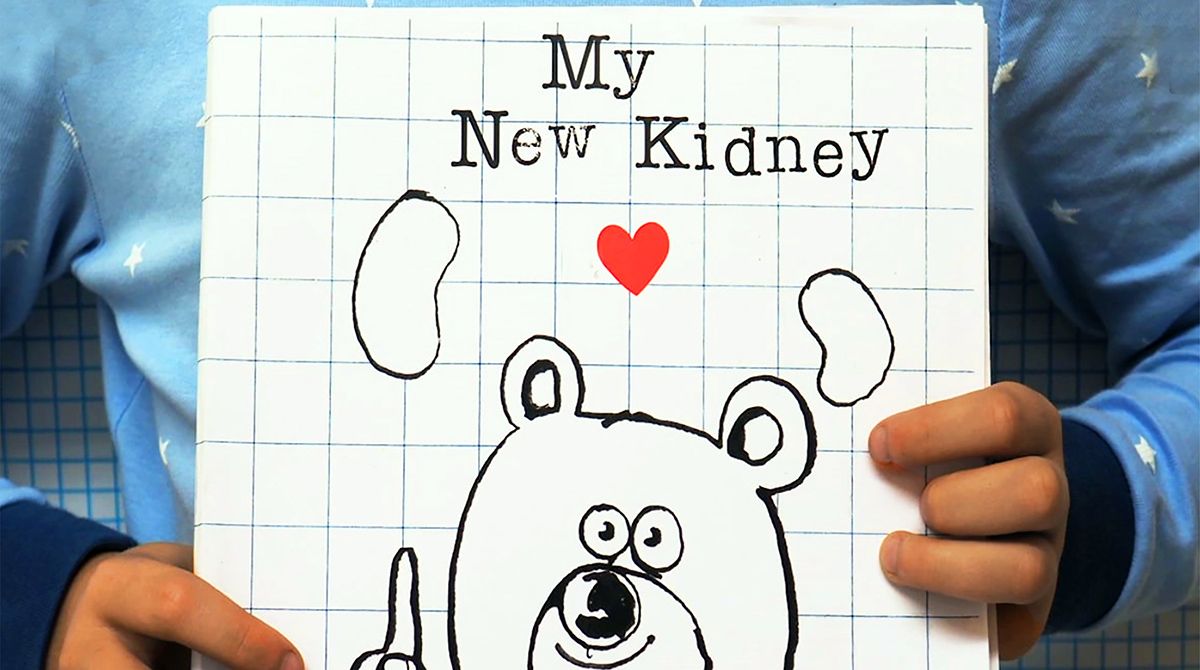 Funding of £5,750 is needed by 31 March for children at Great Ormond Street Hospital to receive a My New Kidney book.

Georgina, who graduated in 2004, has used the creative skills she acquired at Kingston University, along with her own experiences of receiving a kidney transplant at the age of seven, to hand-design and illustrate My New Kidney – an interactive book for young patients awaiting this life-changing surgery.

My New Kidney, which she developed in conjunction with consultants, play therapists, nurses and children themselves, guided children of all ages through each stage of their transplant so they knew what to expect and when, Georgina explained. "Kids can doodle in it, colour it in, note down messages to their family and write down any questions for their doctors that they might feel too afraid to ask in an appointment," she said. "I wanted it to be a book they could truly make their own and it's something I wish had existed when I had my first operation."

Top: Georgina Potier aged 7, bottom: Dr Jake Abrams (left) with Georgina and the My New Kidney book.Georgina was born with multicystic kidneys and had her left kidney removed when she was just six months old. She received a kidney transplant when she was seven, and remained under the care of Great Ormond Street Hospital until she was 18. Her first transplant lasted 23 years and she was given a second in 2013.

It had been after this second operation that her thoughts had turned to helping young people in the same position she had been in when she was a child, 36-year-old Georgina said. "Being in hospital to undergo a big operation can be very daunting for children," she added. "It dawned on me that I could match my knowledge of having the operation at two different stages in my life with my skills as a designer to create something that would help children as well as their families as they went through the process of this major surgery."

Georgina approached Lynsey Steele – one of the play specialists at Great Ormond Street Hospital – to ask what kind of activities the team carried out and what they might find helpful in addition. "Play specialists use tailored toys to help children understand what will happen to them before, during and after the operation, so for example they use dolls to demonstrate what a blood test is," Georgina said. "Lynsey explained that it would be great to have something the children could be physically involved with to help them feel they had some control over what was happening to them."

After mulling on these helpful pointers, Georgina got in touch with her former Kingston University tutor, Associate Professor Dr Jake Abrams to ask if he would collaborate with her on this project.

"I learned such a lot at Kingston and the children's book module, taught by Jake during my second year, particularly sticks out for me because I discovered all the different elements you need to consider when communicating with children," she explained. "Working with Jake on the design and illustrations and meeting regularly with paediatricians, nurses, play specialists as well as children and their families, My New Kidney began to take shape."

Together they had created a series of initial prototypes in a bespoke, typeface that would engage young readers. "The idea is that each child can personalise it throughout their transplant journey to include such details as their diet, medications and the people looking after them," she said.

Consultant Paediatric Nephrologist at Great Ormond Street Hospital Stephen Marks said the book would provide children with the knowledge of what would happen as they moved forward to have their operation. "It will also be beneficial when they are in recovery to help them understand what is happening to their bodies," he said.

Everyone involved had been so positive about the book – encouraging her to get it printed and distributed both at the hospital and within other paediatric kidney units across Britain, Georgina said, that she had been inspired to seek funding to make it happen.

"The team at Great Ormond Street believe in this book so much that they generously donated £1,000 to help us get it into production for them, and they are already linking me up with other hospital teams across the UK," Georgina said. "I also found out about KUBacker – a crowdfunding site for Kingston University students, staff and alumni which would match fund the first £500 and Jake recommended two talented current Illustration degree students from Kingston University, Eiril Linge and Beth Madeley, who created a quirky animation for our crowdfunding campaign," she added (see below).

It had been fantastic working both with a talented graduate and current students, Dr Abrams said. "Beth and Eiril's animated film brings home the imperative nature of this project that could transform the care experience for children with serious kidney problems," he said. "This project also proves that Kingston University students are as entrepreneurial as they are creative."

Kingston University honorary graduate Dame Jacqueline Wilson has also lent her financial backing to the project. The best-selling children's author, who is herself a kidney transplant recipient, is an ambassador for Kidney Research UK and said she was very happy to support Georgina's imaginative and worthy project.

The crowdfunding target is £5,750 by Sunday 31 March to cover the cost of prototype development, animation, production and an initial print run of 150 books for child kidney patients at Great Ormond Street Hospital. "At the current time we have 84 per cent of funding pledged but if we don't reach our total in time, we won't be able to produce the book which would be incredibly disappointing as it would mean 150 children waiting for life-saving surgery couldn't receive this personal, tailored support," Georgina said. 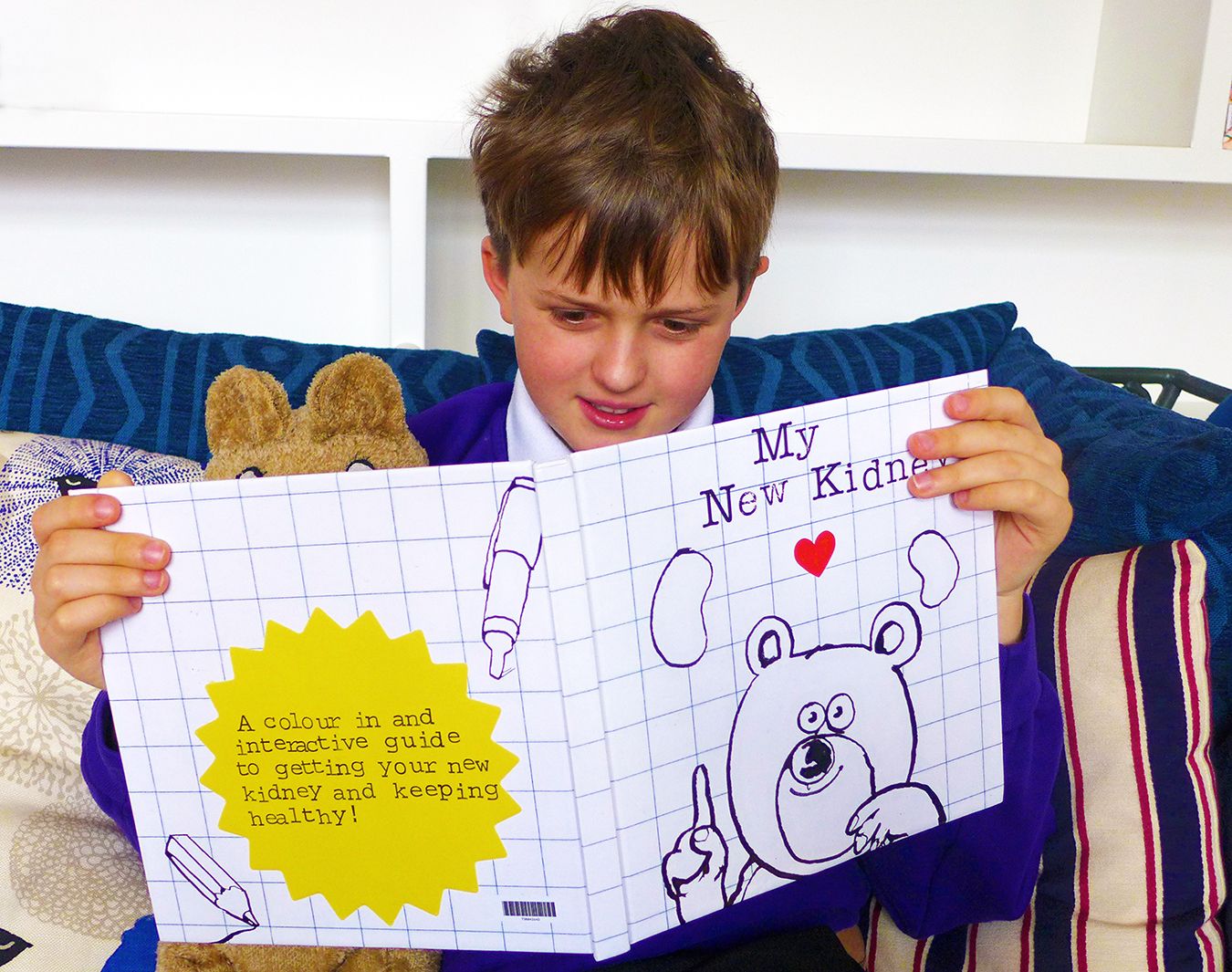 Children will be able to personalise their edition of My New Kidney book to include information relevant to them.