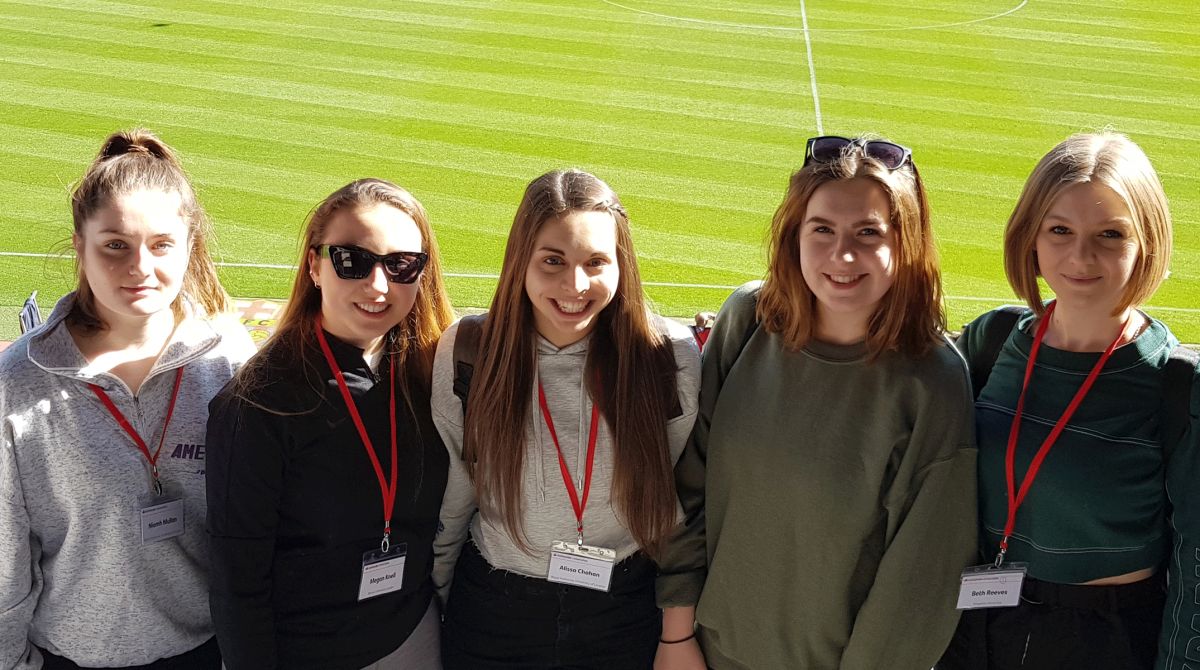 A tour around one of the world's most famous football stadiums and a training session with a footballer who won 19 trophies during his career were just part of the itinerary for Kingston University sport science student Beth Reeves during a European trip organised by Santander Universities.

Beth, who is on the committee of the Union of Kingston Students' women's football team, was selected as the University's representative for the three-day trip to Barcelona. It focused on promoting women in football and the sport's impact on business and local communities.

The third year student was one of 80 leading female footballing students selected for the trip, with a representative from each of global bank Santander's partner universities in the United Kingdom taking part.

The tour started with a conference at FC Barcelona's Camp Nou stadium discussing leadership in football and business and the sport's role in, and impact on, local communities. The panel, which included leaders from Santander and the La Liga club, also offered an inside view of women's football, how it compares with the men's game and how it could move forward.

A two-hour training session with former Barcelona and Chelsea FC player Albert Ferrer followed, making Beth the envy of her Kingston teammates. The now FC Barcelona Legends manager, who lifted numerous titles during his playing career, taught the students a number of drills used by professional football players that could be replicated with their own teams to enhance their training.

After soaking up Catalonian culture during a tour of the city, Beth and other scheme participants got the chance to watch FC Barcelona live in a crucial UEFA Champions League match at the Camp Nou, which saw the Spanish giants come out on top to progress through to the next round of the competition.

A tour around the stadium the following day gave the students a behind the scenes glimpse of what the players of the club experience prior to every game. They also heard about the stadium's planned renovation, the history of the club and saw numerous memorabilia from the trophies the club has won through to shirts and boots worn by former and current players.

Beth said the Santander Universities opportunity reinforced her passion for helping elevate the women's game. "Every woman came back to the UK inspired to be the change-makers we need to be when it comes to equality in football and across sport in general," she added.

"The section for women's football in the FC Barcelona museum was the same size as the area displaying Lionel Messi's boots, highlighting the enormous gap that we are attempting to bridge in the women's game."

Director of Santander Universities Matt Hutnell, said: "We were thrilled to offer this opportunity to top female football talent from across the UK to help develop their leadership skills, both within and outside a sporting context.

"We are committed to supporting higher education and we know that those selected for this programme are equally committed to their sport, investing hours into training and are an inspiration to their peers both on and off the pitch. We hope the trip motivated and supported the female talent with their career ambitions – whether in the world of sport, finance or beyond."