Your brains will set you free, Director of Kingston Race and Equalities Council tells graduates as he is awarded an honorary degree by Kingston University 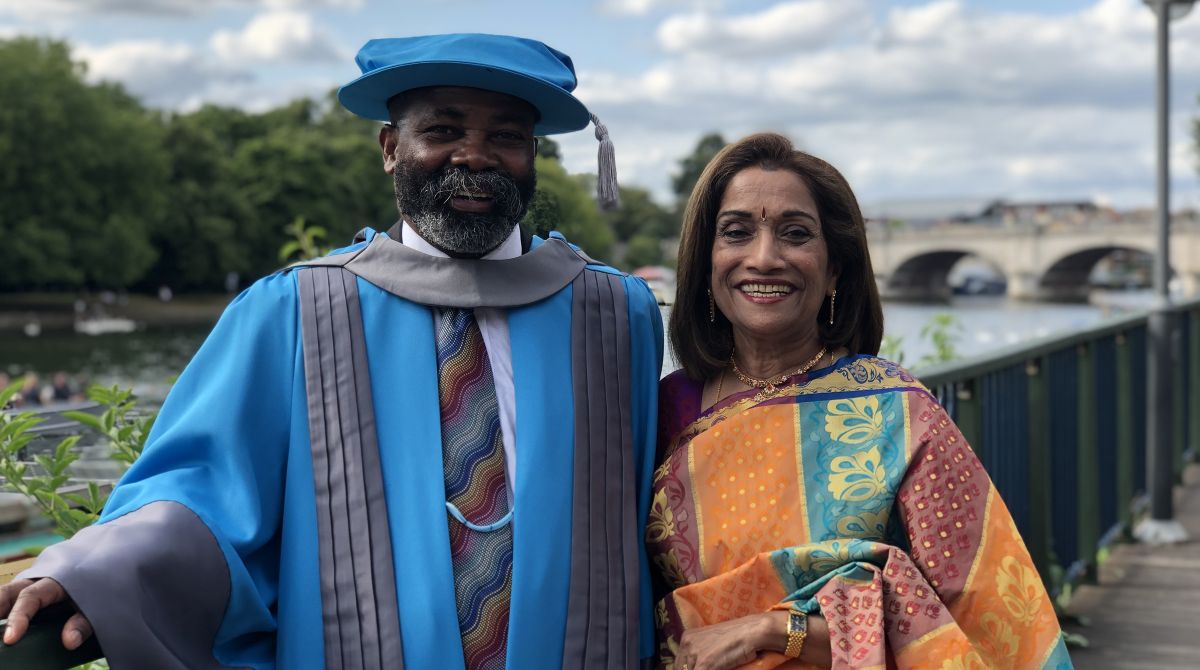 John Azah OBE and his partner Prabha Shetty have been instrumental in shaping the cultural landscape of Kingston.

A race and equalities campaigner who played a key role in influencing and guiding national policy on community cohesion in the wake of the murder of black teenager Stephen Lawrence has received an honorary degree from Kingston University.

Chief executive of Kingston Race and Equalities Council (KREC) John Azah OBE has championed cultural diversity and inclusion across the borough, as well as at regional and national level, since taking up his post in 1989. The Ghanaian-born activist has dedicated his career to advising and supporting victims of hate crime and advocating for human rights across the country.

Ahead of the publication of the Stephen Lawrence Inquiry Report in 1999, Mr Azah was invited to join the Metropolitan Police Racial and Violent Crime Task Force to advise on how to address the lack of confidence among Black, Asian and Minority Ethnic communities. The committed campaigner has continued to work with the Police Service since then, as an adviser and senior executive assessor at the College of Policing. He continues to speak out against racial injustice - giving evidence to the Home Affairs Select Committee earlier this year, he said he feared the progress made on race relations in Britain since the publication of Lawrence inquiry report had been partially eroded during the past decade.

"I was sitting beside Dr Neville Lawrence in the Old Bailey in 2012 when two of the six thugs who killed his son Stephen were jailed," Mr Azah said. "I have worked alongside the Police Service during the last 25 years, something I could not really have imagined doing as a young man. With rising incidents of hate and knife crime, the importance of continuing to work together to challenge prejudice and fight for equality is undiminished. Despite the work of governments on promoting race equality legislation since the Second World War, it is still more difficult for a black person to be successful in this country."

As well as steering national discourse on race relations, the director of KREC has also shaped the cultural landscape of Kingston. He was instrumental in setting up a number of important Black, Asian and Minority Ethnic community organisations, such as the Milaap Day Centre for older people, the Chinese Association and Refugee Action Kingston, where Mr Azah is a volunteer. However, he cites his proudest achievement as bringing carnival to the town. The annual event sees the streets of Kingston bursting with colour and music in celebration of the diversity of the borough.

"When I joined KREC they gave me a blank canvas and they wanted me to paint on it. It's a real privilege for someone to think about the work I've been involved in and believe it merits an honorary award," Mr Azah said. "From a personal perspective, Kingston has allowed me to flourish. Twenty years ago I set up Kingston Carnival and everybody said it would never become a big event. Almost two decades on it is the biggest festival in the borough - that's something that makes me immensely proud."

Kingston University's head of geography, geology and environment Dr Peter Garside, who nominated Mr Azah for his award, said his longstanding efforts as an equalities campaigner had made a significant impact at national level and had also galvanised the town and the University. "John Azah has inspired generations of staff and students at the University to understand the importance of cultural and racial diversity which now, probably more than ever, seems of paramount importance," Dr Garside said. "He has done this at all levels - working alongside students in the classroom as well as engaging with senior staff on strategic decision making. John binds the University with its surrounding community through his work alongside the local authority and the strategic partnership, making sure a plethora of voices are understood among civic partners."

On receiving his honorary award, the alumnus of the University's predecessor Kingston Polytechnic had some wise words for his fellow graduates. "You have to take responsibility for your own success and can't blame anybody else if things don't go right. If you work hard, study hard and are successful, your brains will set you free," Mr Azah said.