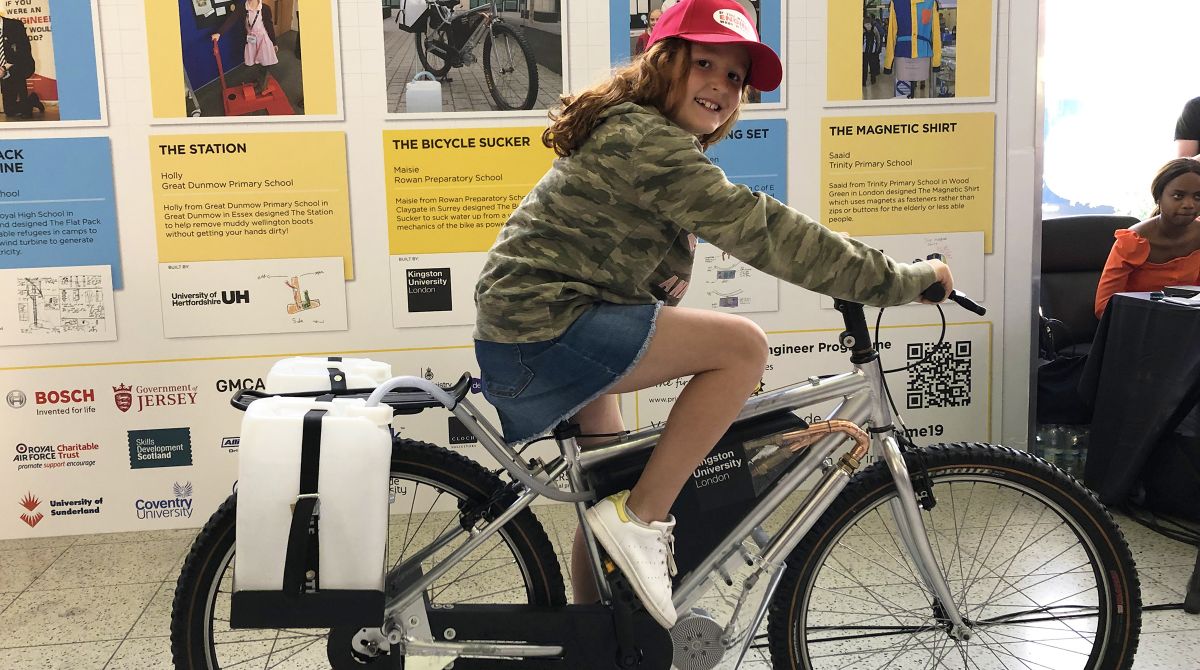 Maisie Crook riding the bicycle sucker - a design she dreamt up that was built by Kingston University staff and students. The prototype went on show at Gatwick Airport as part of the launch of a new partnership with Primary Engineer.

Prototypes for designs to solve engineering challenges built by Kingston University and dreamed up by school pupils have gone on show at Gatwick Airport as part of a Primary Engineer competition launch event.

The airport, Facebook and Network Rail have become national partners for the ‘If You Were An Engineer, What Would You Do?' Leaders Award competition, designed to help encourage students from schools across the country to become the engineering professionals of the future.

As part of the partnership, a three-week long exhibition has been installed in the south terminal at Gatwick, featuring prototypes built by universities based on 11 winning designs by primary and secondary pupils from across the United Kingdom. The Wall of Fame exhibition will allow Gatwick's 125,000 daily visitors to vote for their favourite creations.

Three of the prototypes featured were built by Kingston University, including the bicycle sucker by Maisie Crook, which took centre stage at the launch event streamed live by Facebook London. The Rowan Preparatory School pupil's design allows people living in countries where they collect fresh water from rivers or wells to lower a hose and pump water into two tanks on the back of the bicycle by pedalling backwards.

The other two Kingston builds featuring in the exhibition are the Extending Sink 6000, by Abacus Belsize Primary School pupil Savannagh Dunne, which automatically adjusts in height to suit its user, and the Magnetic Shirt by Trinity Primary Academy School pupil Saaid Abdi, which uses magnets instead of buttons to make it easier for people with disabilities to get dressed.

Being part of the launch event for the new partnership was an ideal way to build on the work the University has been doing to increase awareness of engineering careers for young children, according to Vice Dean of the University's Faculty of Science, Engineering and Computing Dr Lucy Jones.

"Kingston University has been partnering with Primary Engineer for a number of years now and we work with them to turn the engineering designs of primary school children into reality," she said. "This is absolutely at the heart of the work that the University does in widening participation and particularly in increasing involvement and diversity in science, technology, engineering and maths.

"Our technical teams and students have created fabulous prototypes from the initial bright ideas, enriching these young people's experience, proving to them how inspiring engineering can be as a career and ensuring we at Kingston are fully supporting the engineers of the future."

This year, the competition attracted more than 49,000 entries from all over the UK. Each design turned into a prototype was selected from shortlisted or winning entries, all of which were created to make the world a better place through engineering.

Primary Engineer founder Dr Susan Scurlock MBE said: "This exhibition at one of the most important travel hubs in the United Kingdom is testament to the commitment of our partner organisations who rely on a variety of engineering professionals to keep ahead of the game. Each year I am astounded by the designs by pupils, some as young as three as they realise that they can be part of a career that can literally shape the future of the world."