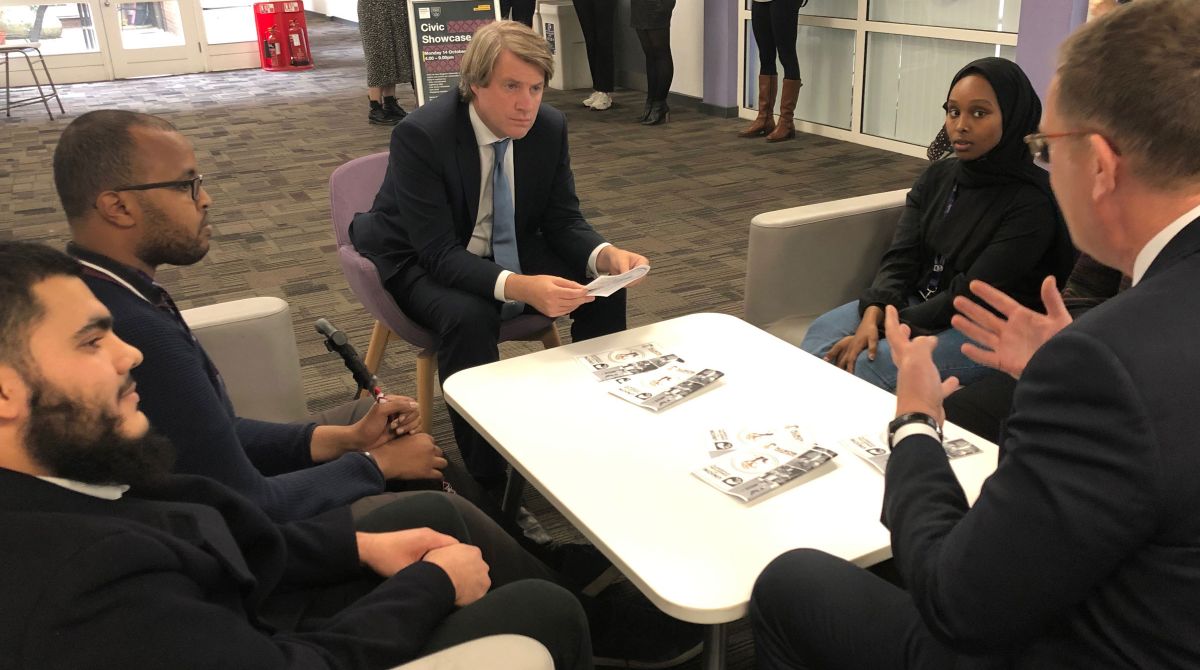 Accompanied by Vice-Chancellor Professor Steven Spier, Minister Skidmore was particularly keen to learn more about the programme of activities being run by the Union of Kingston Students during Black History Month. After speaking to union representatives, including president Feisal Haji and campaigns coordinator Ramla Salad, Minister Skidmore said the visit had given him an important insight into how they had been exploring black history, heritage, culture and achievements during the national celebration. "Black History Month is incredibly powerful in demonstrating both how Kingston University is an inclusive community and also pays attention to the importance of all races and all faiths as part of their university experience," he said.

Students' union President Feisal Haji said the opportunity to discuss the activities with Minister Skidmore had been empowering. "Being able to explain what Black History Month is to someone in a Government role is not an opportunity you often get. We got to tell our stories and have our voice heard," he added.

The Union of Kingston Students has organised a variety of events for Black History Month, including a talk about the power of education from acclaimed author, political activist and rapper Akala. "It's important within a university setting to remind students of their history so they can learn and understand it. It's also important for those external to the black community to understand the experiences of a young black person growing up in the UK going through higher education," Ramla explained.

Minister Skidmore, the MP for Kingswood who has recently returned to his current Ministerial portfolio following a period as Minister of State at the Department of Health and Social Care, also met students from The Bridge AP Academy taking part in a workshop with the University's award-winning Access, Participation and Inclusion team. Education liaison officer Robert Temowo encouraged Minister Skidmore and the Vice-Chancellor to think back to their school days and share some of their memories with the group.

Minister Skidmore spoke of his love of English literature while at school and his desire to become a historian before moving on to deploy his skills in the political arena. Professor Spier, meanwhile, said he had seen many possible futures for himself including as a lawyer and doctor before plumping for architecture in his early twenties. "See your education as an opportunity to really find out what you want to specialise in, explore what you're good at and where you can really make a difference," he urged the students. "That's what going to university can really help you to do."

Echoing those views, Minister Skidmore stressed that anyone should be able to go to university, irrespective of their background or start in life. "I'm absolutely determined as Universities Minister that we continue to accelerate the pace so that, regardless of where people have come from and where they have grown up, they get that opportunity to succeed."

Having visited more than 45 universities this year, Minister Skidmore said he is frequently struck by the enthusiasm of the young people he met as they started their journey in life. The passion they had to shape not only their own future, but also the future of their local communities and their country had also left a lasting impression on him. "It's really infectious having the opportunity to speak to people who are starting out and see university as a really important stage in their journey," he said.

"For too long university was a preserve of the wealthy and the rich. Since we've reduced student number controls, we've given hope and opportunity to so many people across the country to recognise that university can, and should, be for everyone, regardless of their background."