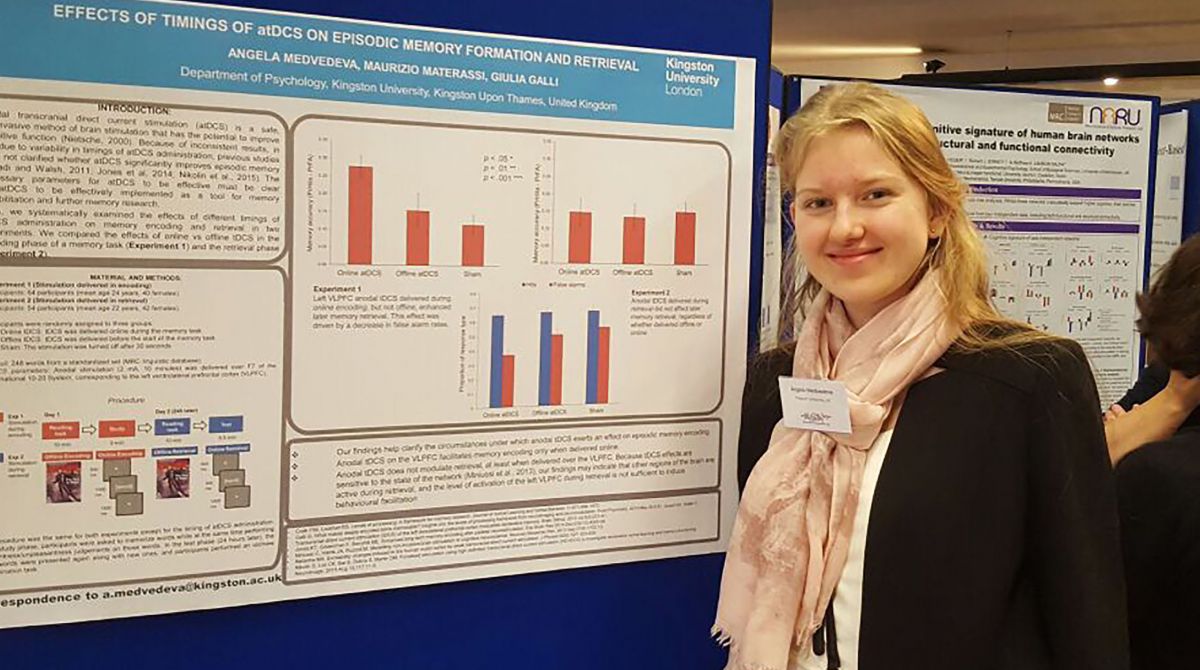 A scientist with an insatiable appetite for knowledge has embarked on a fellowship in neuroscience at the age of 20 after becoming one of the youngest PhD graduates from Kingston University. Angela Medvedeva, who did not excel at science and maths in school, hopes her story will encourage other young women to pursue careers in STEM.

The high-achiever from Houston, Texas studied for the equivalent of A-levels on day release from high school, then completed two university degrees in psychology and liberal studies, before moving to London aged 17 to embark on a PhD in cognitive neuroscience in the School of Social and Behavioural Sciences.

Using advanced brain stimulation equipment, Angela worked on a number of high-impact projects, including validating a widely-used memory test to ensure long-term memory is measured reliably; examining and replicating effects of non-invasive brain stimulation on memory and investigating a well-established language region in the prefrontal cortex and uncovering its critical role in the formation of new verbal memories.

Angela's research drew on her own experiences of speaking five languages - her mother was a translator and is now a language teacher. As a child she was immersed in foreign languages and cultures. She grew up in St Kitts in the Caribbean before moving to the United States and spent school holidays visiting relatives in Russia.

Before Angela had even completed her PhD, she was snapped up by the Vivian L Smith Department of Neurosurgery at McGovern Medical School at The University of Texas Health Science Center at Houston where she is continuing her research with a post-doctoral fellowship. The move back to the United States was swift and she had to hit the ground running. "My PhD prepared me and has given me a good base, but there's a lot to learn," she said. "I went from delivering non-invasive brain stimulation to healthy participants, to observing language mapping stimulation during open brain surgery," she explained. 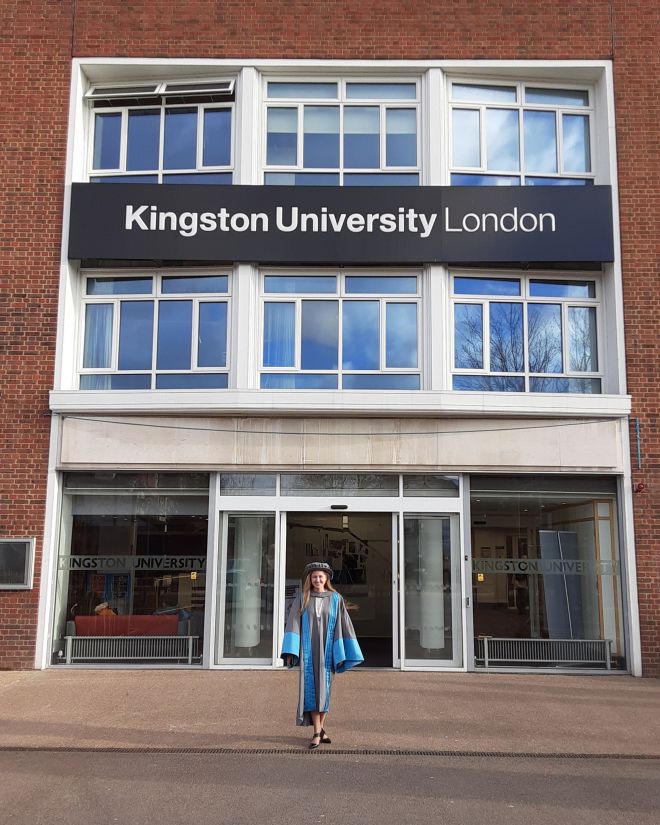 "One of the most interesting parts of my PhD at Kingston University was the interaction between language and memory and I'm happy to be continuing research in this area. However, my current work has greater emphasis on how language works in the brain, especially how we're able to produce speech," she said.

Part of this research is about enabling patients with speech difficulties to talk and be understood by learning how the speech production system works in the brain. "My dream is to be able to decode inner speech through brain activity and translate that into comprehensible auditory speech - exactly like a brain computer interface in which we input the brain activity for speech and the output is audible, comprehensible speech," she explained.

It is hoped that this research will be able to help patients with locked in syndrome - who are able to think but can't speak or move - or those with varying degrees of paralysis, brain damage or neurological disorders from strokes, traumas or accidents, to be able to communicate and have their thoughts and feelings heard.

Despite her research, Angela had not planned on a career in science because she had a flair for creative writing. It was an inspirational geology professor who saw her potential. "I was an average student at science and maths. I didn't know I was particularly good at it or particularly interested in it," she explained.

"My geology teacher really inspired me to believe in myself and to think that maybe I had a future in science. I realised I did have a passion for research and finding things out which I'd never pursued because sometimes I struggled in maths and sciences," she said.

Angela is now keen to continue mentoring other young women and is designing programmes to provide support to female scientists and students in undergraduate and postgraduate education. "It's all about women supporting each other because we know how difficult it is. That's something I'm passionate about - encouraging young women to pursue science, stay the course and to achieve their dreams, with support from senior female scientists," she said. "We need to raise awareness for students to know they can pursue STEM and that it's a worthy pursuit."

After completing her fellowship in about four years' time, Angela has her future mapped out with plans to undertake a further four years of study on a medical programme to qualify as a doctor, then a further seven years of study to become a neurosurgeon.