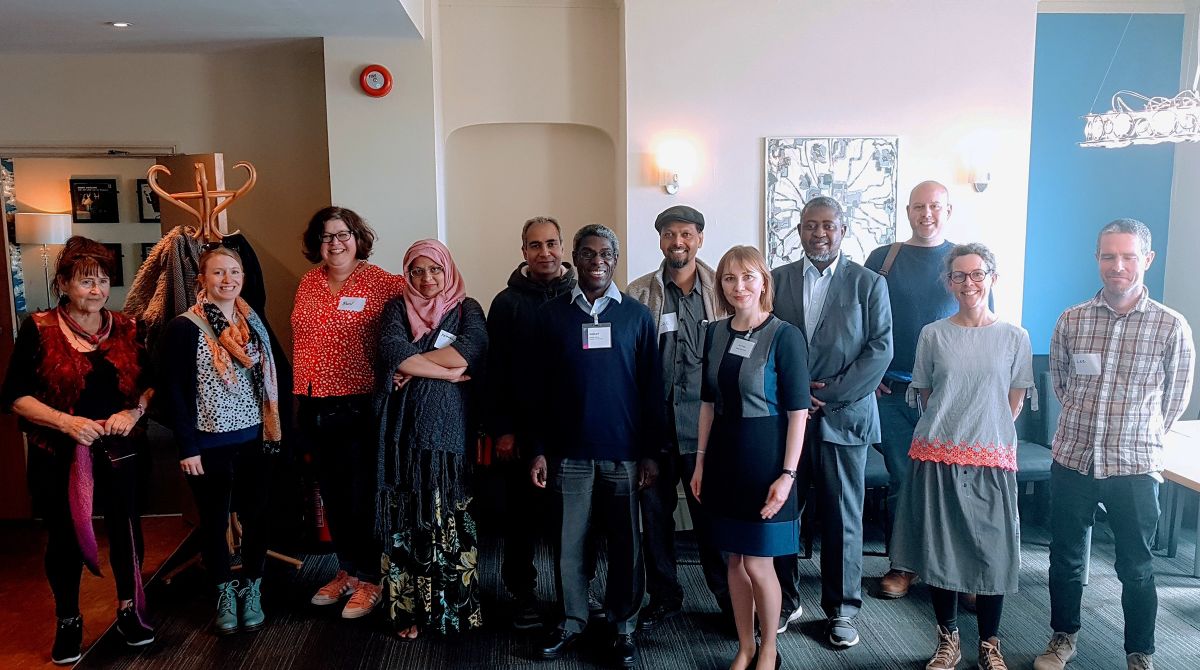 Professor Audley Genus (centre) and Dr Mafuga Iskandarova (centre, right) at the closing event of the ENERGISE research project in 2019

A real-world research project by Kingston University which set up energy ‘living labs' to challenge the energy consumption practices of householders, is set to influence energy use in communities across the UK and contribute to European policy-making on green issues.

The three-year ENERGISE project was formed to achieve greater scientific understanding of the social and cultural influences on energy consumption. Partner institutions from ten countries across Europe explored not just how much energy people use, but also the factors influencing usage - such as societal norms, culture, gender and socio-economic factors, and what affects consumers' willingness to change their patterns.

Sustainability and innovation experts from the Faculty of Business and Social Sciences partnered with community benefit co-operative Energise Sussex Coast to set up energy living labs in Hastings. In the living labs, which ran in the UK and seven other European countries, families and communities worked with researchers and others to reduce energy use in the home. The focus was on changing everyday practices relating to heating and doing the laundry.

Researchers tried to understand the lives of participants in the round and how cultures and social norms impacted their energy practices, said Professor Audley Genus, project lead for the University. "One of the key things we tried to emphasise in our findings was that it's not just about behaviour change - it's a more deep-seated reflection on how people live that influences their energy consumption and willingness to change."

"We tend to do things while being mindful of what we're expected to do and these practices are bound up in cultures. That has to be examined, rather than just the actions of an individual in relation to their laundry habits," Professor Genus added.

As a result of the project, 300 households throughout Europe were able to reduce room temperature by 1°C and do one less cycle of laundry per week by using innovations in practices introduced during the living lab intervention. Businesses - such as energy utilities - played an important rôle in providing advice on living lab design, acting as implementation team partners or making suggestions on how to translate the project findings for practitioners.

The findings have been passed on to policy-makers in the eight living lab countries involved - Denmark, Finland, Germany, Hungary, Ireland, Netherlands, Switzerland and UK - as well informing policy-making in the European Commission. Professor Genus was invited to present the findings to the European Commission workshop on ‘Making the best use of Social Sciences and Humanities in the Clean Energy Transition' (November, 2019).

Early outcomes include initiatives in Denmark, where a local authority invited ENERGISE researchers to contribute content on sustainability to be used in schools from September 2020, when all school year groups will incorporate sustainability in the curriculum.

In the UK, Energise Sussex Coast developed links with Hastings Mosque and extended its energy advice to cater better for Arabic speakers, who were finding it difficult to access its services because of the language barrier. It also started providing support at a refugee drop-in cafe each week.

Professor Genus was supported by Dr Tim Harries and post-doctoral researcher Dr Marfuga Iskandarova, who are all based in the Small Business Research Centre at the University.

The project, which awarded the University a grant of £297,000, completed last year and was recently reviewed by the European Commission, through its Innovation and Networks Agency (INEA).

The report said ENERGISE (European Network for Research, Good Practice and Innovation for Sustainable Energy) delivered exceptional results and successfully identified and demonstrated individual and collective practices and approaches that can reduce dependency on imported energy and diversify supply.