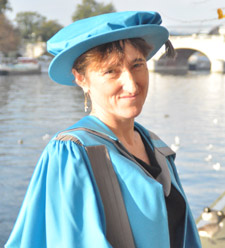 A film director who created one of the UK’s largest networks of after school clubs has been named an Honorary Doctor of Education by Kingston University.

Beeban Kidron's 30-year career directing feature films, television dramas and documentaries including the award-winning 'Oranges Are Not the Only Fruit' and romantic comedy 'Bridget Jones, Edge of Reason' has already brought her great acclaim. Now she is being recognised for founding Film Club - a charity which gives children the opportunity to watch, discuss and review films as well as meeting the professionals who make them.

Speaking at a graduation ceremony at the Rose Theatre in Kingston yesterday, Ms Kidron said she was delighted to receive the award. "I'm particularly pleased that it's from a place that excels in education in terms of teacher training and research - that means a lot to me," she said. A teenage runaway Ms Kidron, 49, also joked: "I didn't go to university and for that reason I feel I've finally fulfilled the expectations of my parents, albeit at my late age."

Film Club was launched five years ago following a kitchen table conversation between Ms Kidron and a journalist friend, Lindsay Mackie. The government-funded charity now has more than 5,000 clubs attended by around 165,000 children. Teachers and sixth-formers can apply to set up a club and, if they attend a state-funded school in England, they receive free films, ranging from blockbusters to international and art house classics.

"There hasn't been a single visit that I've made to a school where I didn't see a child whose light was switched on and I feel that it's my life's work as a human being to turn on the lights and keep them on," Ms Kidron said. "My belief is that all of us, but especially people who work in education, should really, really make sure that we are not just teaching children to read and write, but that we are also giving them something to write about."

She said the charity had received feedback from schools and parents suggesting that the clubs helped children to improve their vocabulary, literacy and communication skills. "I always felt we could do this so I'm beyond delighted, I feel vindicated, and we are undertaking formal research to assess the outcomes," she said. 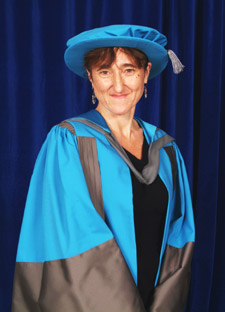 Ms Kidron worked for US photojournalist Eve Arnold who took her on as an assistant straight from Camden School for Girls in north London. Two years later she went to the National Film and Television School. "No one left the school with a piece of paper but they did leave with a lot of films under their belt," she recalled. She did camera work and collected plates at Brick Lane market in east London to sell at auction to help fund her studies but at that time the government paid students' tuition fees and other state benefits.

Aware of her own good fortune, she is bitterly opposed to the Government's plans to further increase the tuition fees of the students of tomorrow. She believes the move could limit poorer students' access to higher education and is particularly concerned that creative subjects are being de-valued

"Our generation has to look really carefully at what we had. I am very grateful and definitely feel I've benefitted from that system but now we must make the economic argument that I and the vast majority of people who went to film school have brought tens of millions of pounds into the economy - Bridget Jones, for example, made some £300 million worldwide," Ms Kidron explained. "The move against the arts in favour of science is not recognising the enormity of what we earn for this country."

Her filmwork has ranged from BAFTA-winning 'Oranges', a BBC adaptation of Jeanette Winterson's lesbian coming of age novel, and 'Carry Greenham Home' a documentary about women who campaigned for nuclear disarmament by camping at the Greenham Nuclear Power, to comedy movies like 'To Wong Foo' which starred Patrick Swayze and Wesley Snipes as New York drag queens. Vanessa Redgrave, Ian McKellen, John Hurt, Shirley McLaine and Kathleen Turner are just a few of the great actors she has worked with.

Her latest film project is a documentary for the BBC, out next year, titled 'Sex, Death and Gods', about young girls in India who are married to a 'Goddess' in childhood and then sold for sex when they reach puberty.

"Every decade of life brings a different pleasure. Some of the work I did when I was young was ground-breaking, like 'Oranges'. In my middle decade I was enormously proud of going to Hollywood and working for top level producers like Steven Spielberg and Larry Gordon. And this decade is about the documentary and Film Club and putting something back into the world.  We have to make sure that the people that come after us get their share," she reflected.

Speaking at the graduation ceremony when Ms Kidron received her honour, Head of Kingston's School of Education, Mr Andy Hudson spoke of how hearing her speak had inspired him. "Beeban's passion is contagious, she speaks movingly about the importance of film in her own life, and tells wonderful stories about the impact of movies on the emotional and intellectual development of the youngsters with whom she's worked," he said. "As a very successful film director she's worthy of recognition for that alone but we honour her today for her energy and creativity and for the pure joy that Film Club has brought to young lives around the country."