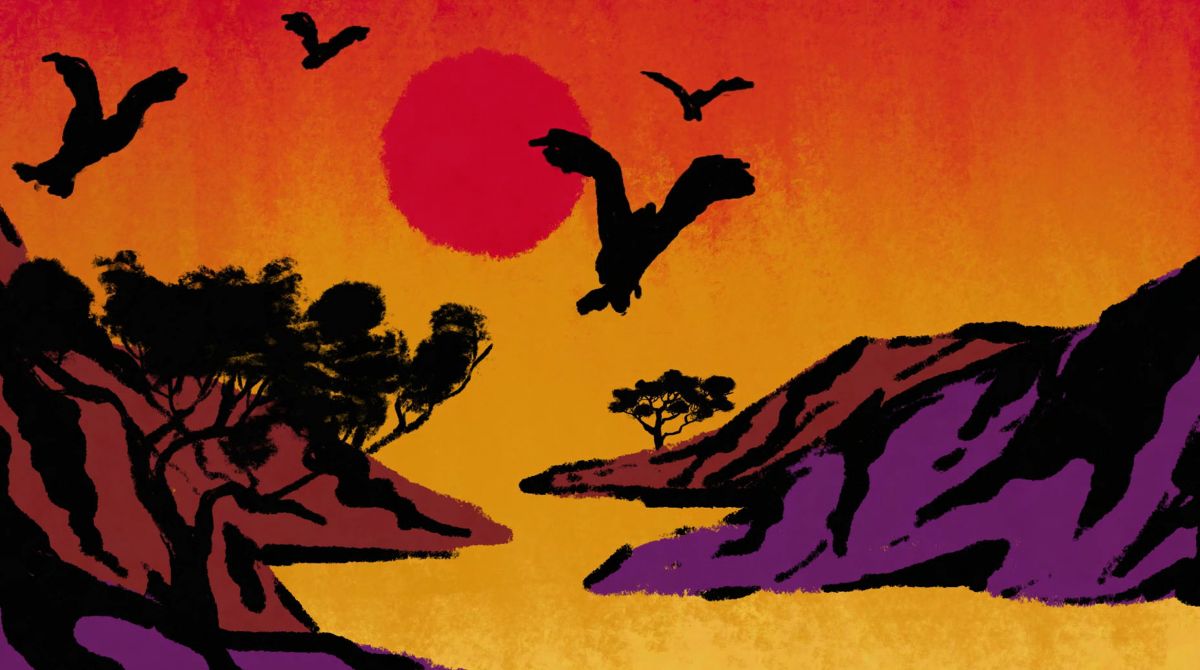 Kingston University students created an animated film to accompany a song about experiences of young refugees.

A group of illustration animation students from Kingston School of Art have created a stunning animated film to accompany a song written by young refugees living in the UK during the Covid-19 lockdown.

Third year undergraduates Cat Baskerville, Rhian Jenkins, Bella McEvoy and Nathan Ward collaborated with Compass Collective - a non-profit theatre company that works with people seeking sanctuary after fleeing persecution in their home countries. The students' animation work is featured in a special film, Imagine, which was released to raise awareness of World Refugee Day, in partnership with Shakespeare's Globe theatre and Migration Matters, a non-profit organisation which promotes evidence-based conversations about migration.

The artists had less than a fortnight to animate the song, Life In Africa, which details one refugee's terrifying experiences of war in the Democratic Republic of Congo (DRC) before he came to the UK as an unaccompanied minor.

Almost all the work was done remotely during the UK lockdown due to Covid-19, as Rhian explained. "The four of us had never worked together before, so we met in a park to discuss our initial ideas and from that point the whole thing was done remotely," she said. "We all have very different styles and skills but we're so pleased with the way the final animation came together," she added.

"With such a short timeframe we focused on creating beautiful images and subtle movements, mostly using Photoshop. We looked at African fabrics for inspiration and came up with motifs such as guns, flowers and women," she said. Rhian said they didn't want to generalise on the African themes so they arranged to speak to the songwriter online. "He had some specific ideas, for example using the red and orange colours of his homeland, and words in the song he particularly wanted to highlight," she said.

"It was fascinating to work with such a broad range of people and prioritise their voices in the final work," she added.

Compass Collective aims to nurture and support young refugees and asylum seekers who, without family in the UK, are particularly vulnerable. "Many of us have come to understand the feeling of loneliness and isolation as a result of lockdown," said director Leah Gayer. "But this is systemic for young refugees and asylum seekers. They must be allowed to develop their skills and talents.

"In this project we needed to protect our songwriter's identity, so we needed a fresh visual approach. The talented students from Kingston School of Art have honoured his ideas in such a beautiful way, bringing the colour, the heart, but also the pain of his homeland to the screen. We are thrilled with the collaboration and we can't thank them enough," she added.

This project came about through Kingston School of Art's links with animation director Anna Ginsburg, senior lecturer in illustration animation, Nick White, said. "Anna has previously taught on the illustration animation course and has employed several Kingston students over the years, so when she was approached by Compass Collective she thought it would be a perfect project for us," he said. "We are proud of our industry links and reputation that our students can deliver ambitious and thoughtful work," he added.

• Find out more about illustration animation courses at Kingston School of Art.