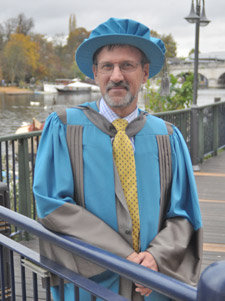 A professor who has helped launch the DNA 'barcode of life' - a huge project cataloguing every species on earth - has been named an Honorary Doctor of Science by Kingston University.

Professor Richard Lane, Director of Science at the Natural History Museum, said the database, which will ultimately allow experts and non-experts to identify species in the field, possibly using a hand-held device, reflected his passion for opening up scientific knowledge to as wide an audience as possible. "It's risky and controversial to some people because they think it replaces a traditional way of distinguishing species based on experience and knowledge. We say it doesn't do that - it gives access any time, anywhere to a much bigger group of people from individuals to international regulatory bodies," he said. "It means you'll be able to identify an organism without having to be an expert."

Professor Lane has spent much of his 30-year career researching insect-borne tropical diseases, such as malaria and leishmaniasis, which is transmitted to people through sand fly bites and kills by wiping out victims' immune systems. His research, some conducted at the London School of Hygiene and Tropical Medicine, involves studying the pattern or epidemiology of a disease to help identify and prevent it. At the Wellcome Trust charitable foundation he helped set up a number of public-private partnerships which developed drugs for treating tropical diseases which might otherwise have been neglected by the major pharmaceutical companies.

Although he has worked with Kingston University, helping to develop the new Centre for Art and Humanities Research at the Natural History Museum, Professor Lane said news of the honorary doctorate had come out of the blue. "It's one of those delightful surprises one has in life," he added.

Speaking at the graduation ceremony where he was awarded his doctorate, Professor Lane told students that their science degrees were a passport to a world of opportunities. "In the past, the 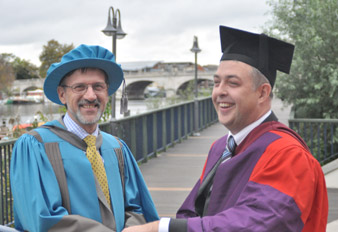 main options were research or teaching - as a researcher it requires total immersion, which isn't for everyone - but now scientific expertise can be used in the communication of science and we really do need many more scientifically-literate people in government and in industry."

It was important for scientists to take responsibility for engaging with the public and give access to information in a way that they could understand, he added.  "If people comprehend the basic science behind challenging issues such as climate change, they can put it alongside other aspects such as economics, ethics, faith and politics and join the decision-making process."

Engaging with the public has been at the heart of much of Professor Lane's work at the Natural History Museum. He first joined the Museum in 1980 as Head of the Medical Insects Section, leaving in 1985. This was followed by another five-year stint in the 1990s before he rejoined in 2003 in his current role where he is in charge of 350 staff and 150 research students. Early in his career, he was part of a team that designed and built an exhibition on human biology which was ground-breaking at the time because of the way it presented interactive concepts and ideas rather just exhibits in display cabinets.

Professor Lane's favourite objects at the Museum include illustrations from explorer Captain James Cook's voyages depicting the plants and animals he discovered in Australia and the meteorite collection. "There are meteorites which contain pieces of cosmic detritus that predate our solar system. To be able to hold the oldest thing a human being could hold is unbelievable," he said.

Not surprisingly, given his lifelong fascination with arthropods, he also loves the museum's vast insect collection. Growing up in Sussex and Australia - "if you're interested in creepy crawlies it's the place to be," he quips - he collected insects and other creatures that his tolerant parents allowed him to keep in his bedroom. "Mammals aren't so different to us but insects are fascinating because they're so alien to how our bodies work." His childhood passion inspired him to train as an entomologist - a scientist specialising in the study of insects - at Imperial College, London, where he is now a visiting professor.

Dr Tony Walker, from Kingston University's School of Life Sciences, praised Professor Lane for the major contribution he had made to breaking down barriers that had hindered public understanding of science. "The Natural History Museum is a truly inspirational place and Richard Lane has had a major input in forming its research agenda," Dr Walker said. Professor Lane's vision had been influential in the museum's expansion, exemplified by such developments as the iconic Darwin Centre, which gives visitors an insight into scientific research and allows them to see scientists at work, Dr Walker added.