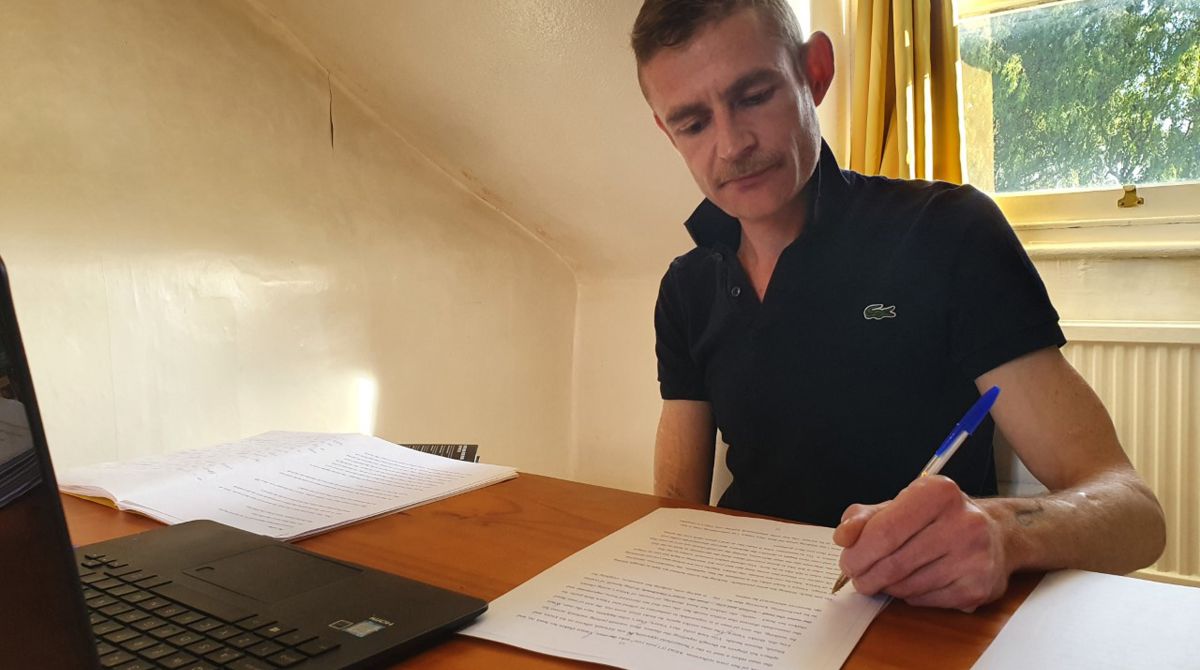 Joe Pierson's novel ‘Helen and the Fires' has won The Peggy Chapman-Andrews Award For A First Novel in the annual Bridport Prize International Creative Writing Competition, which aims to discover and encourage new creative writing talent.

Described by the judges as "a book for our time", the novel was inspired by climate change and the dark writings of Russian author and philosopher Fyodor Dostoyevsky. The UK lockdown earlier this year also gave Joe the time to write.

The 34-year-old, who lives in Lewisham, South London, was delighted with the award which he hopes will lead to his first novel being published. To win the award, he beat more than 1,600 entries, the highest number of submissions ever to this category. Previous winners include acclaimed novelist Kate Atkinson MBE and new writers Kit de Waal and Kelleigh Greenberg-Jephcott.

Joe's book tells the story of a young woman called Helen who quits her job to write but finds herself caught up in an investigation into several suicides in apparent protest at climate change. "It's a sort of literary fiction murder mystery," he said.

The judges, who included British novelist Emma Healy, described Joe's novel as "ambitious in its scope, but sharp in its detail, full of surprises, beautiful observation and insights into the nature of story-telling."

Writing has been a passion for Joe, whose literary influences are Dostoyevsky and Brazilian author Clarise Lespector, since childhood. "I have always enjoyed it. I find the experience so rich and satisfying," he said.

He began his novel while studying for his PhD in Creative Writing at Kingston University's Kingston School of Art and working as a catering manager at Tate Modern in London. Juggling the workload was challenging until lockdown happened earlier this year. "While not wishing to underestimate how difficult the lockdown was for many people, it did give me the time to write," he said. As a result, Joe was able to complete his novel and submit it to the Bridport Prize in May.

"'Helen and the Fires' is written in a very spare, precise and clipped-down style and I produced the first draft quite quickly," he added. "The longest process was the editing, which is what I did during lockdown, to make the language as tight and clear as possible."

Joe, who is originally from Harwich in Essex, also credited his creative writing courses and tutors at Kingston University, where he also completed his masters, with helping him to hone his style. "A close working relationship with one of my tutors, Dr James Miller, was particularly helpful. He encouraged my writing to be more experimental and to submit my stories to literary journals and quite a few were published," he said.

Dr Miller, senior lecturer in English Literature and Creative Writing at Kingston University, said he was thrilled that Joe had won the award. "Joe is an outstanding writer and understands that to write well requires hours of honing, editing and revising. He is a brilliant stylist with a unique voice and an exacting, minimal style. He's also very experimental, willing to be bold and take risks," said Dr Miller.

"Our creative writing course provides an environment that is supportive and critical, allowing writers to develop and hone their skills, find their voice and the confidence to express that voice and take risks. It enables them to get a sense of where their writing sits in terms of both peers and the wider market," he added.

As well as focusing on getting his first novel published, Joe is spending the second lockdown writing his next book. Set in the summer of 2020, it is about a filmmaker who takes three women to a house in the south of England to help him film an adaptation of Dostoyevsky's ‘The Brothers Karamazov' while the pandemic spreads across the country.

"It's very different to ‘Helen and the Fires'. It's a very strange book and it will be interesting to see how it turns out," said Joe.

As well as the £1,500 prize money, Joe will receive professional feedback from The Literary Consultancy and a consultation with literary agent AM Health and publisher Tinder Press.