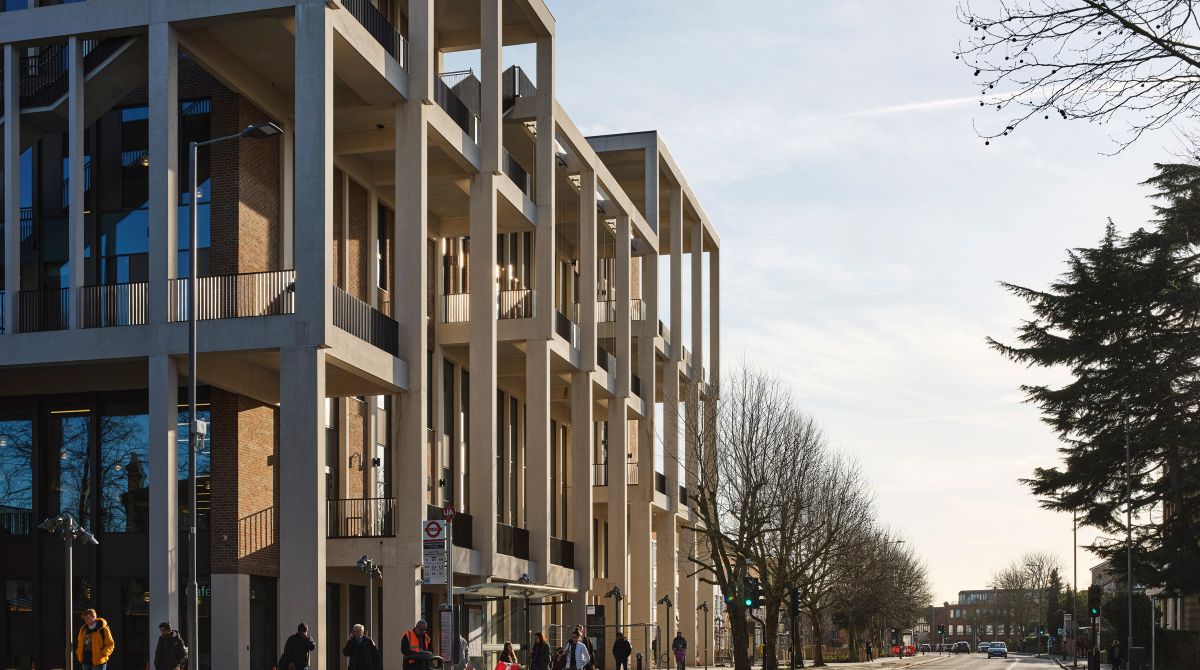 Kingston University's Town House has been named among the best architecture of 2020 by two eminent national critics, topping off a year of accolades for the iconic building that takes pride of place on the Penrhyn Road campus.

The latest recognition arrived as Town House, designed by RIBA Gold Medal-winning Grafton Architects, reached the milestone of one year since it first opened its doors to students and staff.

In Rowan Moore's five best of 2020 feature in the Observer newspaper, the respected writer described the building as ‘generous and dignified' and ‘a reason to cheer'.

Meanwhile, the Guardian newspaper's architecture and design critic, Oliver Wainwright, listed Town House as a highlight of his round up of the best architecture of 2020. "From the desks of the quiet study areas in this open plan cathedral of learning, you can look down into a dramatic triple-height performance space – and straight across into dance studios, where students flex their limbs opposite pharmacologists deep in their textbooks," he wrote.

The multi-million pound Town House has reinvigorated the learning experience for students and acts as a gateway to the University for residents and businesses. Some 5,000 students, staff and members of the Kingston community passed through its doors on its opening day in January 2020, and many more have done so since.

The building is home to an extensive library and archives, group study space, dance studios, studio theatre, covered courtyard, cafes and two roof terraces – all set out over six floors. In November it was named a runner up in the Buildings that Inspire category in the annual Guardian University Awards. 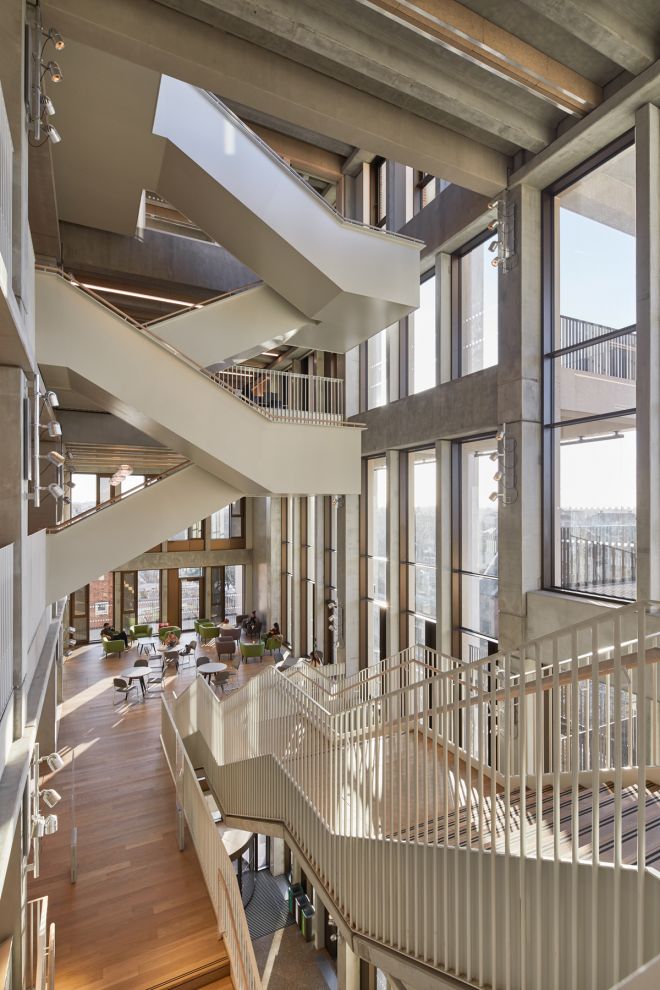 That announcement came soon after Kingston School of Art's revamped Mill Street Building had carried off a highly commended accolade at the Mayor of London's New London Architecture (NLA) Awards.

The extensive refurbishment of the Mill Street Building at the University's Knights Park campus was designed by Haworth Tompkins, the Architects' Journal AJ100 Practice of the Year, to provide more than 10,000sqm of creative teaching, workshop and studio space for students. It has reduced carbon emissions by about 50 per cent and is now rated BREEAM Outstanding – the highest industry rating for assessing sustainability.

Commenting on the contenders for the Mayor's Prize for Circular Design, the NLA judges said the decision to retrofit the existing building and the care taken with the reuse, repurposing and recycling of construction waste made a powerful statement about the potential of existing buildings.

Town House was also a finalist in the NLA London Awards – shortlisted for top honours in the learning category.

Meanwhile, the Civic Trust named both Town House and the Mill Street Building as regional finalists for its 2021 awards. The accolades celebrate outstanding architecture and planning, particularly recognising projects that have made a positive contribution to the communities they serve.

In other recent praise, Town House, completed by Education Constructor of the Year winner Willmott Dixon, was also highly commended in the Concrete Society's Annual Awards. The construction of the building was a significant undertaking, with specialist sub-contractors casting a concrete frame offsite before assembling the structure piece by piece on location.

The Concrete Society panel applauded the design in promoting space, light and opportunities for collaboration by students from different disciplines. The judges also admired the way the concrete complemented stonework in the Surrey County Council offices on the opposite side of Penrhyn Road.

Town House project manager Gary Young said the building had lived up to expectations despite the challenges the education sector had faced during the pandemic. "Town House was six years in the planning and took three years to build," he added. "It's been wonderful to celebrate the achievement of it opening and to see students and staff enjoying the building, which has already become a landmark in Kingston and the surrounding area."

Meanwhile, the University's Associate Director of Capital Projects, Connor Wilson, said the transformation of the Mill Street Building had created world-class facilities for the next generation of artists and designers. "The upgrade has opened up the space – maximising natural light and creating flexibility and more opportunities for collaboration between different courses," he said.

"Having Town House and the Mill Street Building both being celebrated in such a breadth of award nominations demonstrates the investment Kingston University has made in creating state-of-the-art facilities for students, staff and the wider community to enjoy for many years to come."

Both buildings are also among this year's regional finalists for the Royal Institute of British Architects' (RIBA) annual awards, which will now be judged in 2021.

They were also key attractions in London's Open House 2020 – a celebration of some of the most striking architecture in the capital. The wider community was invited to view the buildings on virtual tours and find out more about their architecture and history.