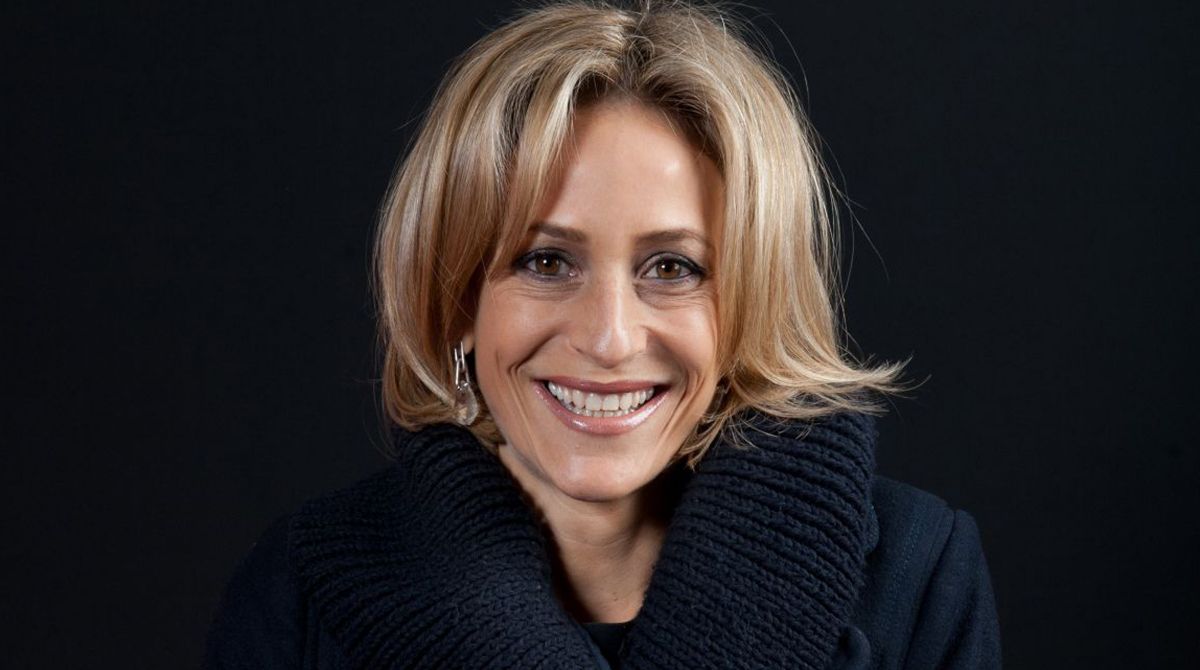 The Americast podcast host impressed an audience of nearly 300 guests as she discussed how Covid-19 has restricted the news-cycle, how she copes with the demands of social media, and her debut book, Airhead: The Imperfect Art of Making News.

Airhead was the chosen title for this year's Big Read, which was set up to create a sense of community for the University. Free copies of the book were given to new students and digital copies to staff and current students, providing a common talking point for all.

Throughout her career, Maitlis has interviewed some of the most influential and fascinating individuals of our age. She gave her talk while quarantining following her trip to the United States of America for President Joe Biden's inauguration.

While Airhead gave staff and students a rare glimpse behind the scenes of some of Maitlis' most notable interviews, the author event created an opportunity for two journalism and media students to show off their own interviewing skills, delving into the latest news from America.

The devastating fire at Grenfell Tower, and the interview with then-Prime Minister Theresa May that followed, earned two chapters in Airhead. When asked if emotions compromised the interview, which took place just moments after May was booed by Grenfell survivors, Maitlis said interviews are very much subject to the context of the time. "I think my emotions informed it," Maitlis explained. "An interview always belongs to the moment and it was the interview I had to do for that moment. I had to address the fact that people were asking questions that nobody from her government had answered."

Maitlis is prolific on social media and uses Twitter to interact with her Americast listeners. Her large social media following informs her work and she tries to ignore any negativity. "I don't find Twitter that toxic – I find it an incredibly warm, engaging and helpful place a lot of the time," she said. "If I get something I don't like I just don't engage with it and think they're not that happy."

Journalism student Ella Devereux, who led the interview, called the experience invaluable. "It was a great privilege for us all to have a first-hand insight into Emily's world as a leading broadcast journalist," Ella said. "Her comments on current affairs were particularly compelling. I'm incredibly grateful to the University for giving me this opportunity – as a young journalist it was invaluable."

Before she logged off for the night, Maitlis thanked the Kingston community and said she'd like to return once Covid-19 restrictions allow it. "I can't tell you how honoured I am. I'd love to do it all in person once we're on the other side of this," Emily said. "You've got some real superstars there."

Journalism and media student Keyari Page, who introduced the Newsnight presenter and shared questions from the audience, called the moment the highlight of her University experience. "Getting the opportunity to introduce Emily Maitlis to the Kingston University community was an honour." Keyari said. "Emily calling Ella and I superstars will be the highlight of my studies."

Professor of publishing and Director of the KU Big Read, Alison Baverstock, said she was pleased with the role the book had played in welcoming students to Kingston this year. "As an institution we're very proud to have had such a high-profile author. Emily Maitlis' book, our first non-fiction title, opened up new opportunities, from the Big Read Book Club we ran over the summer, to our first online author event." Professor Baverstock said. "It was such a joy to have her insight, energy and personal enthusiasm for the project – and to feel that, through her, Kingston had a first-hand connection to the huge events on which she reports."

Previous Big Read choices were The Unlikely Pilgrimage of Harold Fry by Rachel Joyce, Eleanor Oliphant is Completely Fine by Gail Honeyman, My Name is Leon by Kit de Waal, The Humans by Matt Haig and About a Boy by Nick Hornby.