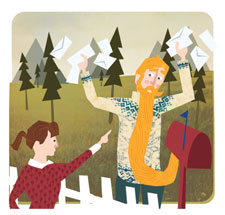 Ever been "caught standing with your beard in the mailbox"? Or tried "to shoot sparrows with a cannonball"?

Both phrases  appear in 'Hyndman's Illustrated Compendium of International Idioms', which has been put together by 24-year-old Kerry Hyndman who has just completed an MA in Illustration at Kingston University in London.

The first is a translation of a common Norwegian idiom; the nearest English equivalent is probably "to be caught with your pants down". The second comes from Hungary and means something along the lines of "use a sledgehammer to crack a nut". If you think they sound peculiar, how do you think phrases like "wild horses couldn't keep us apart" or "like ships passing in the night" must sound to people from abroad learning English?

"I had a Norwegian flatmate and she got a text which said "sorry to rain on your parade" so she asked me what it meant. I realised it's very difficult to understand another country's idioms - but they're also very fascinating," Kerry, from Sevenoaks in Kent, said. 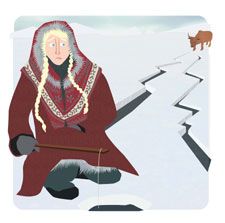 Each of the eight idioms in the book is accompanied by one of Kerry's colourful, striking illustrations. In each case she has created a very literal depiction of such phrases as "now the cow is on the ice" (Swedish meaning "now we're really in trouble") or "to reheat the cabbage" (Italian meaning "to revisit an old flame").

But were there any phrases that Kerry really wanted to illustrate which didn't make it into her compendium? "Oh, there were some fantastic French ones! If someone's being a bit over familiar they might say 'we didn't raise the pigs together' - which is a great phrase but a bit difficult to visualise!"

"We strongly encourage students studying creative subjects here at Kingston to work without any constraints other than the limitations of their own ideas," the head of the University's School of Communication Design, Lawrence Zeegen, said. "Having one eye on the commercial realities of the creative industries and the other on the development of their own personal visual language is the key. Kerry has proven she has the ability to keep both balls in the air at the same time."

The Eight Idioms in Hyndman's Illustrated Compendium of International Idioms are: