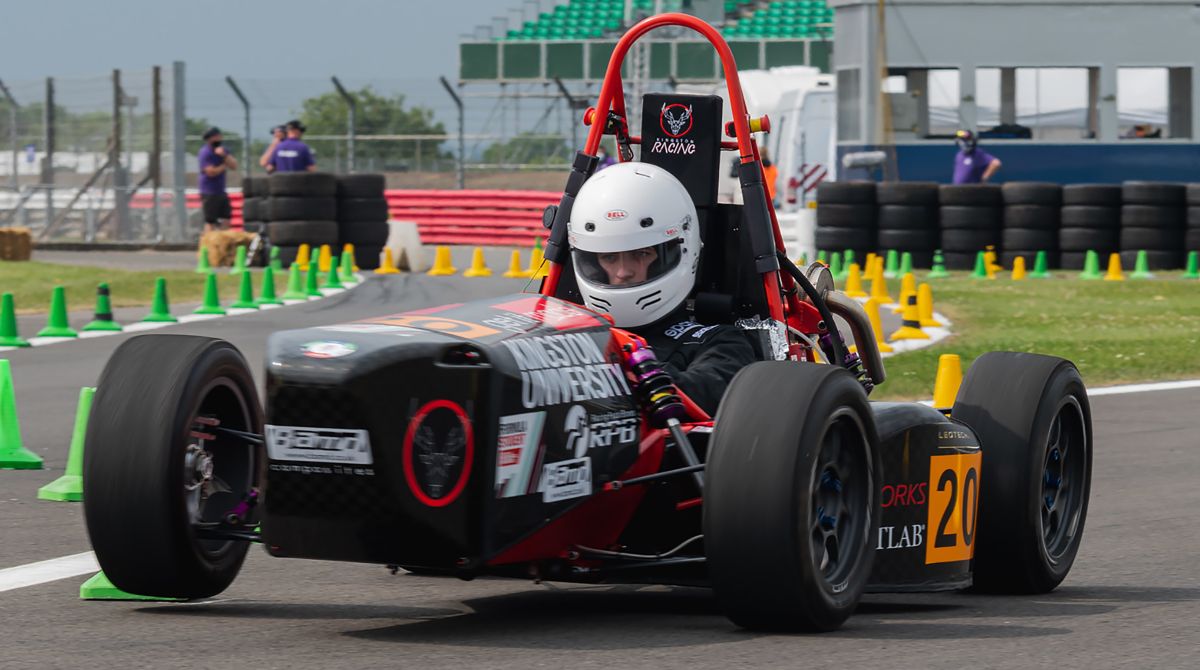 The Kingston Racing team overcame several setbacks – from having to replace cracked components to nearly running out of fuel in the final stretches – to secure seventh place overall and fourth place for first-year cars in the annual international competition. It was the first time a Kingston entry had completed all events in the five-day contest, with the team placing third overall in the endurance event – a 28 lap, 22km drive that pushes the car to its limits over 40 minutes.

Kingston University was one of only four teams to complete the endurance event, securing their position within the top 10 and hugely improving on the previous finish of 69th place out of 80 in the 2019 event. The annual competition, run by the Institution of Mechanical Engineers(IMechE), challenges university teams from across the world to design, build and run a single seat race car, with Kingston University's student engineers supported by academics and technicians from the Faculty of Science, Computing and Engineering.

Over the course of the past week, the team had to navigate cost and design events, then pass a series of stringent scrutineering assessments and finally a series of dynamic challenges, comprising sprint, acceleration, skid pad and endurance. A potential disaster was averted after the sprint test when the team identified a potential issue with the hubs- large aluminium components that connect the rear drive shaft to the wheel. After removing them, they found and replaced a transfer plate with two severe fatigue cracks, which could have shattered and ended their competition.

The success of this year's team reflected the huge effort that had gone into every aspect of the project, the team's leader, final year Mechanical Engineering BEng student Antonino Bartolotta, said. "It's been an unbelievable few days and we're all just so happy," he said. "We had to go back and forward with the noise test during scrutineering, when we passed it was then about managing expectations, keeping everyone calm and making sure we didn't throw away this opportunity.

"I was really nervous before the endurance event, we weren't sure if we had enough fuel to finish but when we did it was a fantastic feeling. We've all learned so much, from stepping up to make crucial decisions under pressure to trusting in our judgement and each other." The team's academic lead, mechanical, motorsport and automotive systems lecturer Patrick Sheen, spoke of his pride in all those who have been involved in the development and running of this year's car.

"There have been so many people who've contributed towards securing our best-ever finish and it really is testament to the commitment and effort of every member of the Kingston Racing team," he said. "I'd like to give a special mention to Conor Bunnell, who designed a lot of the car before graduating last year and is now a technician at the University. He was one of our drivers and sat in the baking heat in an FIA race suit through all the scrutineering tests to get us through. We didn't have a single problem with the electronics, which was down to Antonino, who led the team so well throughout, and auto technician Mayur Jani.

"One of the most surprising things about Formula Student is how it drives home how robust components need to be and how long you can trust them for if under extra stress. Our students have been fantastic, some who've come to the UK for the first time and thrown themselves into this competition. We've had brilliant support throughout, we could really feel the backing from the rest of the University pushing us to succeed and we're so pleased to have delivered."

Vice-Dean of the Faculty of Science, Engineering and Computing Dr Lucy Jones said: "In what has been a particularly tough year the team has really pulled together to finish with the best results Kingston University has ever gained. Fingers crossed this is the start of an upward trend and just a taste of things to come – the Faculty is very proud of the achievement of all students and staff involved." 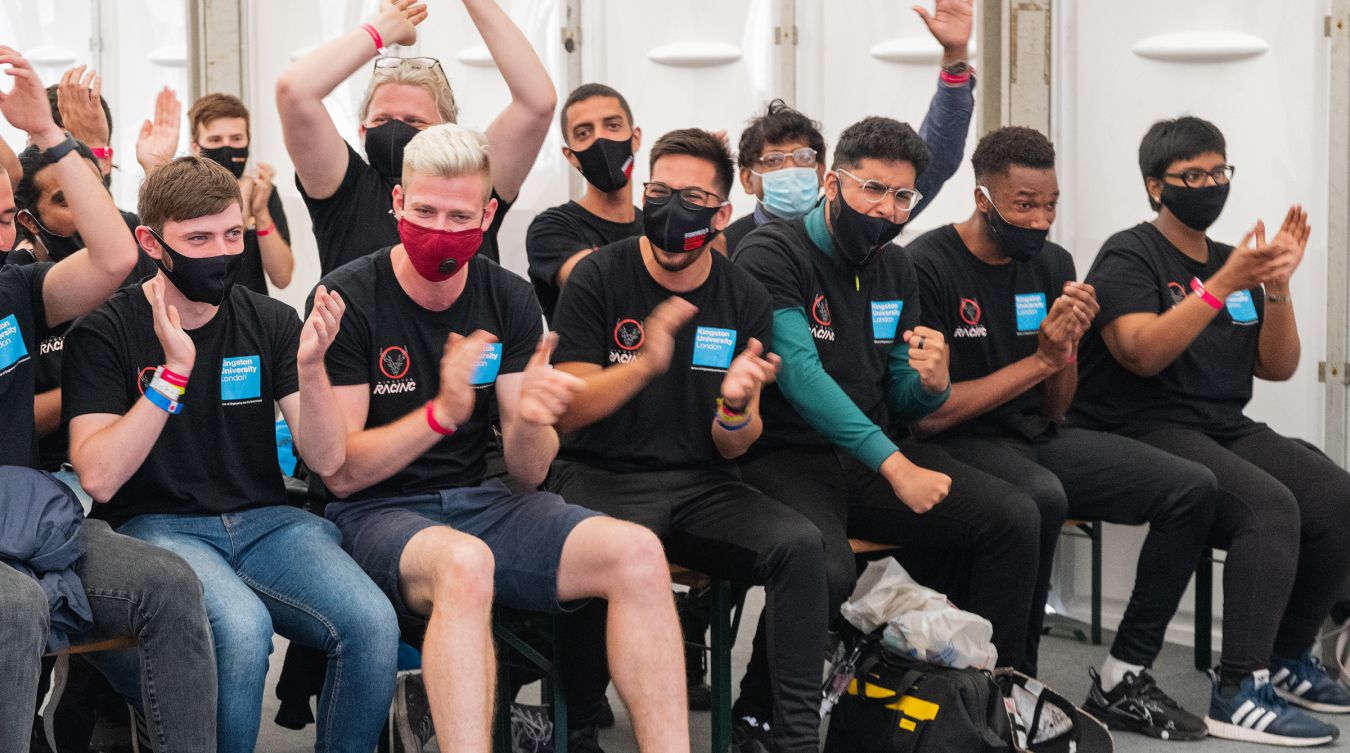 The Kingston Racing team celebrate as the results come in. 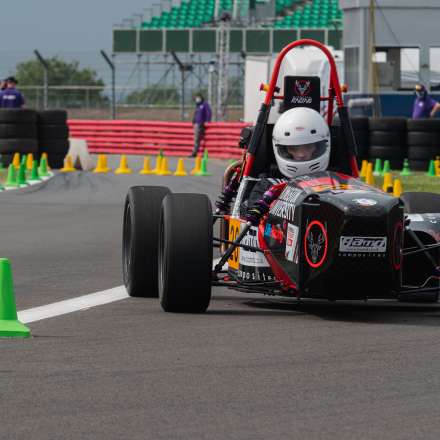 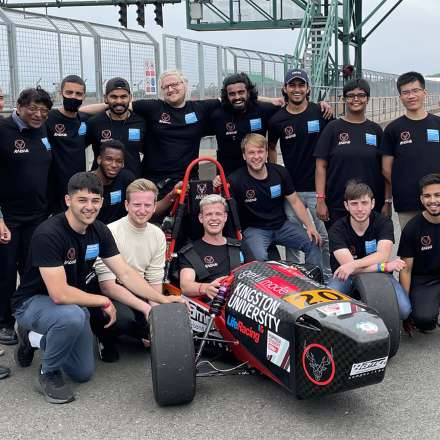 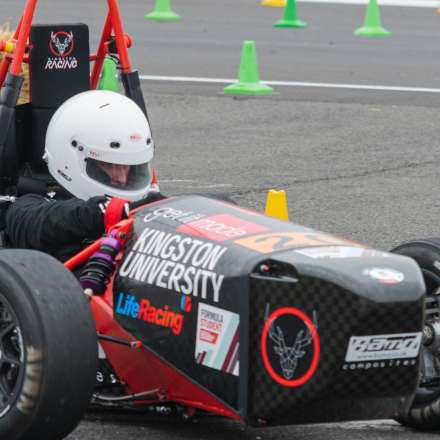 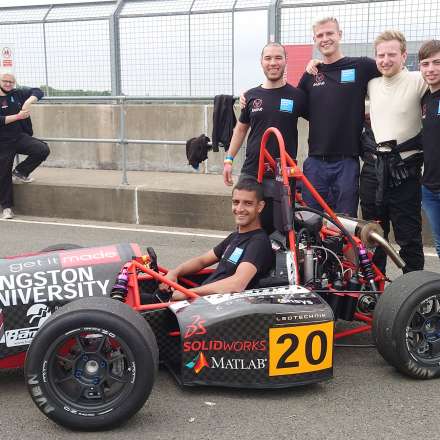 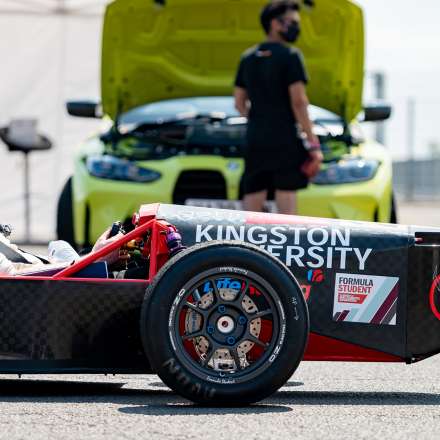 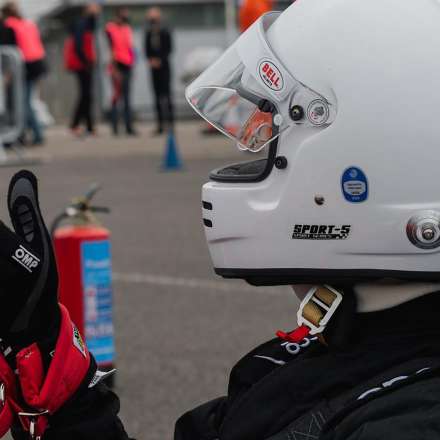 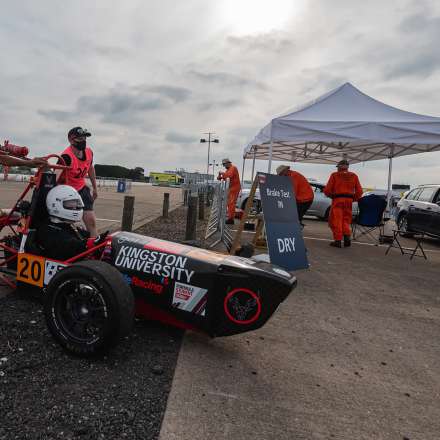 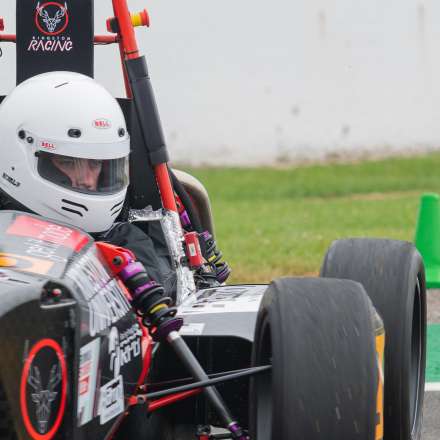