The new novel by Sir Salman Rushdie has fired the imaginations of animation students at London's Kingston University who have been commissioned by the publisher Random House to produce four animated films based on the book. 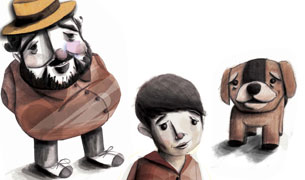 Luka and the Fire of Life is Sir Salman's second children's novel. It tells the story of 12-year-old Luka Khalifa and his quest to steal the fire of life to revive his father Rashid who has fallen into a deep sleep. Reviews of the book have compared it to work by J.M.Barrie, Kipling and J.K.Rowling.

Ten students from the University's Faculty of Art, Design and Architecture visited Random House to meet Sir Salman and present their ideas. The author was part of a judging panel which awarded several prizes for the best concepts. "The quality of the work from the students has been astounding," the publisher's head of marketing Roger Bratchell said. "It's been very enjoyable to work with such an imaginative and diverse group of young people from Kingston University."

The panel felt Yao Xiang produced the best character design. "The most daunting bit was after we had given our presentations," she said. "We couldn't tell what the judges thought about our work and we had to go and wait in a small 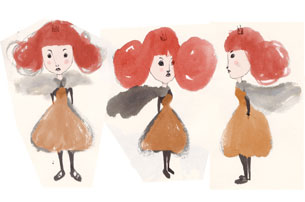 room. I was so surprised when they said they liked my work the best."

"It was great that Sir Salman was so open-minded," senior lecturer in animation Damian Gascoigne remarked. "He didn't seem wedded to a fixed idea of how his characters should look but seemed extremely receptive to some very individual interpretations of the figures from the book.

"The work he chose was a surprise to me - but in a good way. He didn't latch on to those ideas that had obvious commercial appeal but, instead, selected some that were really trying to do something a bit different."

"Projects like this are the lifeblood of art and design at universities," he added. "They're exactly what the students most want and invaluable to the relevance of our teaching at Kingston University."

Coming from south-west China, Yao knew very little about Sir Salman who won the Booker prize in 1981 for Midnight's Children. "I had seen his other children's book, Haroun and the Sea of Stories, but that was all," she said, admitting she had not been aware of the enormous international attention focused on Rushdie after the Ayatollah Khomeini issued a fatwa against him in 1989.

Yao's favourite character from 'Luka and the Fire of Life' was Soraya, the Queen of Ott. "She gets angry very easily," Yao explained, "so it was a tough challenge to create a face that looked as though it was about to explode with rage. 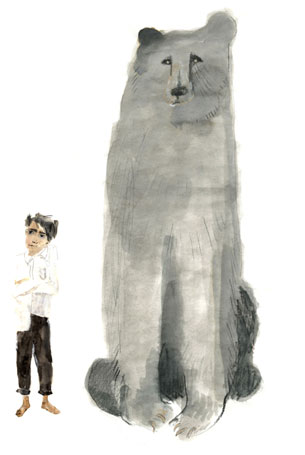 "I didn't use any traditional Chinese techniques when I created these characters - in fact I even used Russian ink. I really wanted to draw more upon the new things I've learnt at University in Kingston," she added.

Sarah Maycock from East Sussex won a special prize for the best illustration. She painted five characters, including Luka's two companions - a bear named Dog and a dog named Bear. Talking about the meeting with Sir Salman, Sarah said she didn't feel all that nervous. "There was a really lovely feeling of camaraderie among the students. We were so supportive of each other," she said.

Four visual concepts, Yao's and those by Sam Falconer, Ben Tobitt and Jun Hyoung Chun, were selected by Random House to be made into animations, which it is planning to put on its website and on YouTube. The four students will meet Sir Salman again on December 21st when he will watch their finished one-minute films and choose an overall winner.