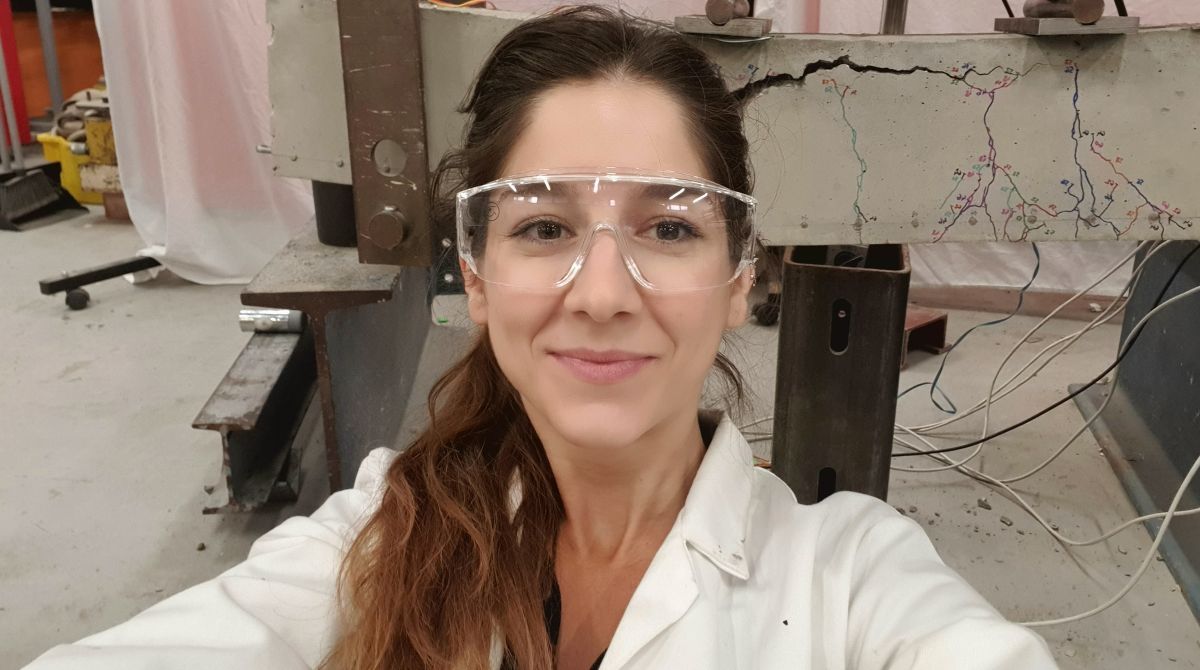 A postgraduate engineering student whose research could help drive sustainable innovations in the concrete industry has reached the national final of this year's Vitae Three Minute Thesis (3MT) competition – with a little help from a childhood toy.

Ana Pavlovic, from Belgrade in Serbia, has been exploring the use of a common volcanic rock, basalt, as an emerging alternative material to steel for reinforcing concrete structures as part of her PhD, having already completed a Masters degree at Kingston University and a second Masters at the University of Belgrade.

"When talking about sustainable construction it's not just about how much energy it takes to produce something, or its whole-life emissions, but also what resources are required to create it – if the resource is very limited it's not necessarily sustainable," she said.

"Basalt is a rock that exists everywhere, it's abundant on Earth and even on Mars so it could have far-reaching applications. The composite material I've been researching, Basalt FRP, is created by crushing and melting basalt to form into fibres, so it's environmentally friendly as well."

Concrete is the world's most widely used building material, but when reinforced with steel it is susceptible to corrosion – which can be problematic in certain environments. Basalt composite, by comparison, is stronger and lighter than steel and doesn't rust. Ana's research has focused on better understanding how concrete reinforced with basalt FRP might perform over a building's entire lifespan, collecting data using sensors to develop mathematical models to predict its long-term behaviour.

Ana was one of a group of PhD students from across Kingston University who entered this year's global 3MT academic competition, which challenges students to deliver a compelling spoken presentation on their research topic and its significance in just 180 seconds, alongside an image of their choice.

Faced with the challenge of how to explain prestressing, a technique used to prevent cracking that can occur within basalt FRP-reinforced concrete as a result of the material's flexibility, Ana turned to a long-forgotten toy from her childhood to help make it relatable.

"I was thinking of different ideas and talking to family and friends about it when I remembered a collapsible wooden beaded giraffe toy I used to play with. When the button is released, it tightens a thread and compresses the giraffe, and the same principle applies to prestressed concrete," she said.

"I could have shown an image of a building collapsing or corroding steel, but the giraffe toy felt like the perfect way to demonstrate the principle in a fun, light-hearted way that helped set the tone of my presentation."

After winning the internal round of the academic competition – first developed by Australia's University of Queensland and being held virtually this year – Ana went on to impress judges in both the quarter and semi finals. This Friday she will be one of six finalists from across the UK hoping to be named national champion.

"I really wasn't expecting to have got this far," she said. "Being able to explain your research to people who aren't experts is something I've not had to do that often, as both my parents are engineers too. Transferring your excitement about a subject to others and helping them understand why they should care has so many benefits and I've learned so much through this process."

"Three Minute Thesis challenges student to think about their PhD through someone else's eyes," Professor Petroczi said. "This year we had the most diverse range of disciplines represented yet and this process really helps students from across our faculties identify what's important about their research and its impact.

"Ana's love of concrete was clear from the start, she's a quick learner and very confident and we've been delighted to see how well she has done in reaching the national final."