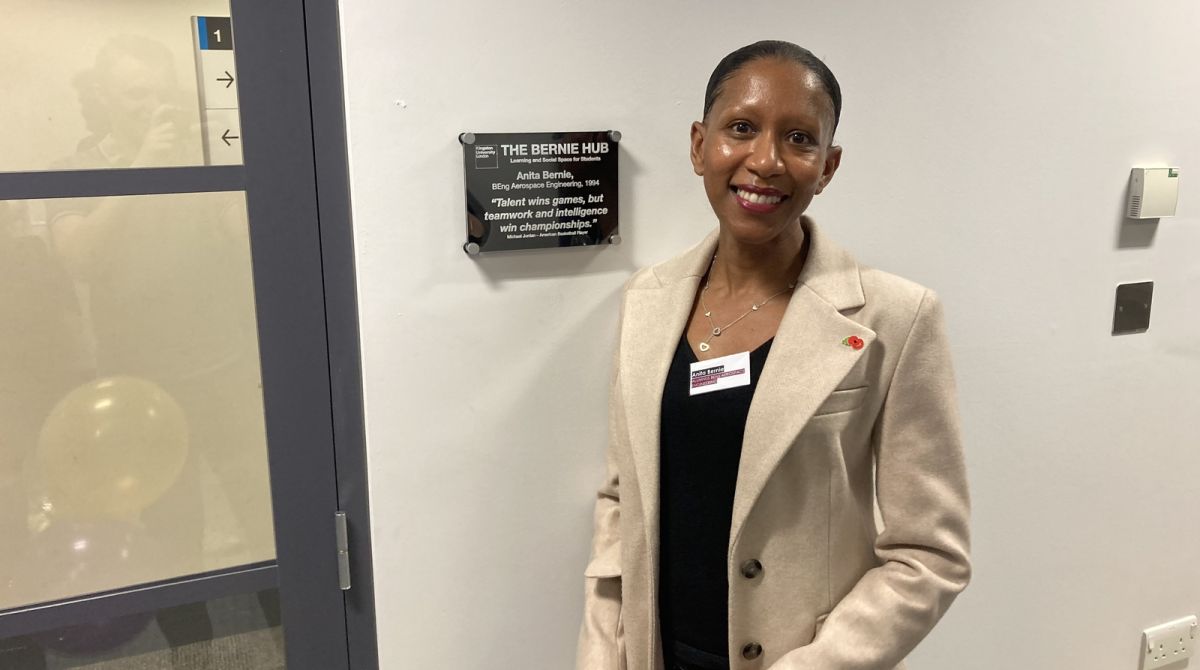 Ms Bernie was on hand to meet students and cut the ribbon to officially unveil the new Bernie Hub in the campus' Hawker Wing building. The new room was set up to provide a dedicated networking and social space for engineering students, which a suite of computers and seating areas to encourage collaborative learning.

Having graduated from the University with a degree in aerospace engineering in 1994, and returning to complete an MBA in 2000, Ms Bernie has since gone on to have a successful career in the space engineering industry. She currently leads strategy and execution efforts at KISPE Space Systems, which works to find innovative and cost-effective solutions to make space-based applications more accessible, while also serving as a board member for small satellite spacecraft provider AAC Clyde Space.

After speaking to staff and students from the School of Engineering and the Environment at the ribbon-cutting event, the experienced engineer – who was previously employed as director of exploration missions at Surrey Satellite Technology Ltd – spoke of her pride in having a room at her alma mater named after her. "It's just such a fantastic area," she said. "It's a place where people can come together to learn, collaborate and build teams - having my name associated with this hub is a real honour, pleasure, and privilege."

Reflecting on her time at the University, Ms Bernie outlined how the skills she had developed at the institution had helped her in her future career. "The thing I really loved about Kingston was the opportunity to combine the academic and the practical," she said. "We learned things in the classroom and then went to the lab and figured out how to make things work. Engineering is such a creative discipline – everyone thinks it's about the hard numbers but actually it's about working within constraints and trying to make difficult things happen. It is perfect for people who enjoy solving problems."

Aerospace Engineering, Astronautics & Space Technology student Maya Patel, who is a member of the Union of Kingston Students' Engineering Society was among those who took the opportunity to explore the new space and speak to Ms Bernie during her visit. "The Bernie Hub will be a great new space for us on campus, it's really light and airy and looks like a great place to study," she said. "It was fantastic to meet Anita too - we really enjoyed hearing about her career, and it will be great to work in a space named after such an inspiring graduate."