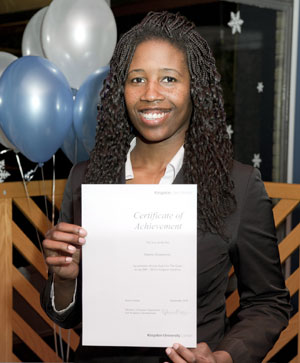 This week, as a national newspaper revealed that some colleges at the UK's top universities did not admit any black or ethnic minority students this year, Kingston University's Business and Law Schools celebrated the rich diversity of their undergraduates at an awards ceremony to mark high achievement.

More than 100 first and second year students who had excelled in academic and extracurricular activities attended the event at the University's Kingston Hill campus. Those invited had gained first class marks in at least half of their modules, been highly commended by employers during their work placements or had made an outstanding contribution to the University community through volunteering and other activities.

One of the highest achievers was second year law student Sheena Chawatama from Guildford. In her first year Sheena took part in a scheme called Quest, developed by Kingston Law School to encourage students to take up volunteering and skills development opportunities. Quest points were awarded for taking part in activities, and Sheena achieved the highest number of points amongst all her first-year peers. She volunteered as course representative to raise the views of her fellow law students with staff, raised money for charity, and visited court and attended guest-speaker events to improve her CV.

At the ceremony the 27 year old, who hopes to be a property lawyer when she graduates, was awarded a prize by the dean of Business and Law, Professor Jean-Noel Ezingeard. She said it was really encouraging that the University took the time to acknowledge student achievement. "Getting recognition for the hard work we put in to our studies and other parts of university life means a lot to all the students who were invited to the awards," Sheena said. "It made me realise that all the extra effort I put in was worth it." 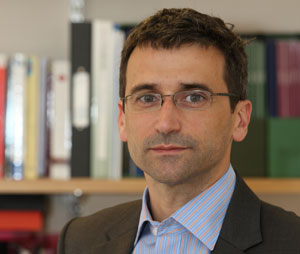 Professor Ezingeard, who spoke at the ceremony, said the awards marked the success of students from all backgrounds and emphasised the diversity of Kingston's Business and Law Schools, the latest figures show that more than half of the students are from black and Asian backgrounds.

"Of all the events I attend every year, this is probably the most special to me as I think it typifies what university is all about," Professor Ezingeard said. "Some of our students always knew they would go to university, but for others it was something they only realised might be possible later, at school or further education college. These awards celebrated the achievements Business and Law students from all backgrounds who have played their part in building the fantastic community of learning we have here."

All the students who attended the ceremony received a certificate to commemorate their success. More than 50 of the highest achievers were also awarded Amazon gift vouchers.