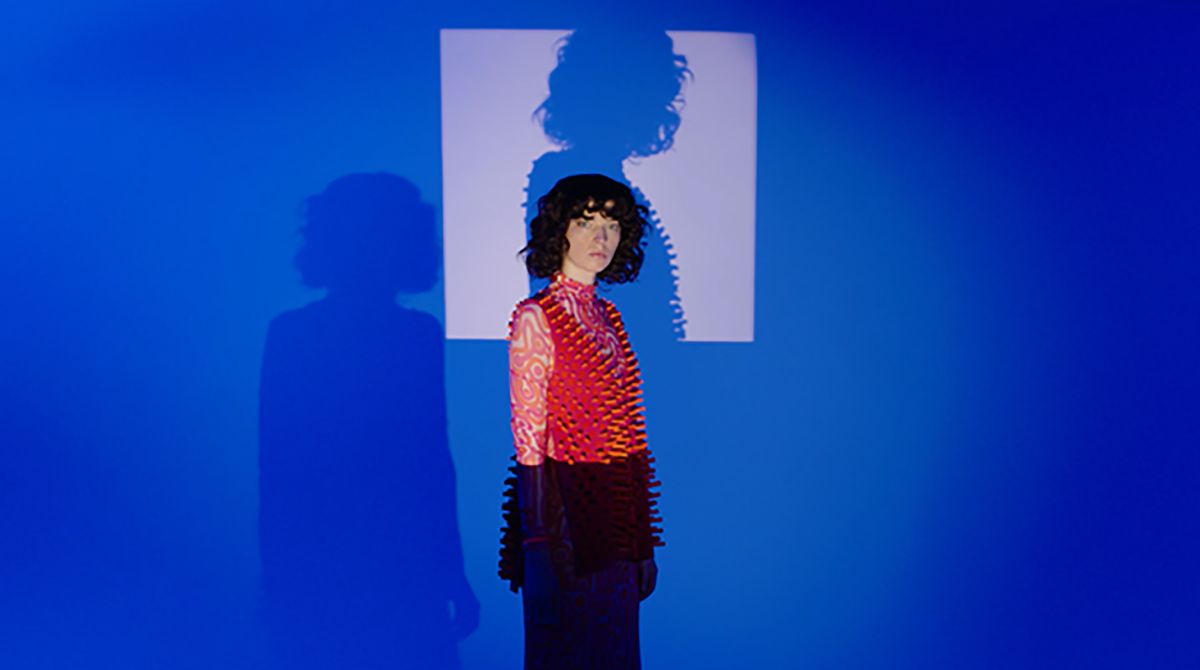 The film accentuates the personalities of models showing the impact clothes can have on mood and emotions, while embracing gender-fluid fashion.

Fashion collections from Kingston School of Art’s MA graduates have been unveiled in an innovative and striking new film that acts as an alternative to the traditional catwalk show. 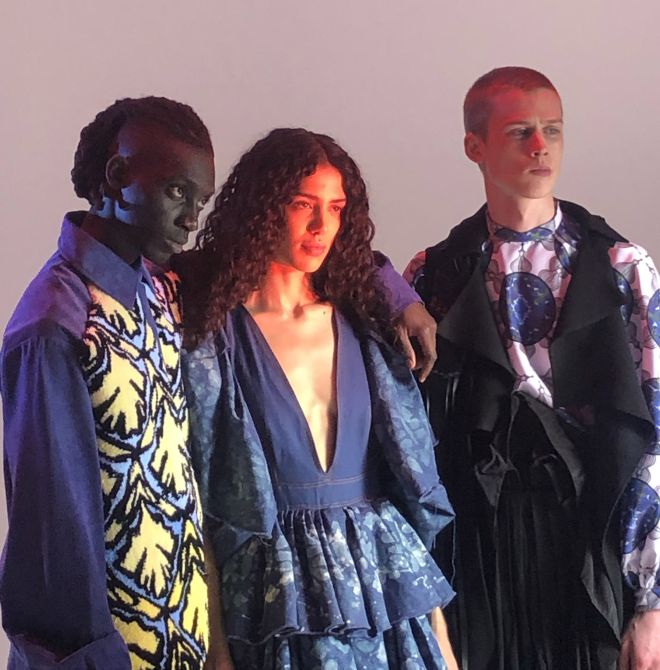 The film features models wearing different garments designed by graduates as opposed to whole looks. Photo credit - Kingston UniversityShot on campus, the film celebrates fashion as a platform for self-expression and individuality, with featured models encouraged to be playful and explorative. It captures a gender-fluid editorial photoshoot of individual garments from 19 graduate collections.

The film was produced in response to the changing graduate fashion climate, Richard Sorger, course leader for MA Fashion, explained. “Graduate runway shows are becoming less common and harder to achieve owing to the ongoing challenges of Covid-19,” he said.

“We saw this as an opportunity to produce something far more spontaneous and creative than a traditional catwalk which can often feel quite static and repetitive. Working with an external stylist and filmmaker, we were able to achieve something that has its own distinctive high-end style and is ahead of the curve, which are two characteristics we emphasise in our teaching on the course,” he added.

The course team, part of the Design School at Kingston School of Art, collaborated with stylist and creative director Emily Evans who has worked with well-known brands including Jimmy Choo and Gucci. She helped the team cast the models, as well as directing and styling them throughout the production process. “We needed the models to have big personalities, to be comfortable moving in front of the camera,” she explained. “We gave them the freedom to interact with the clothes, to show the magic that happens when people try on clothes and how this makes them feel.” 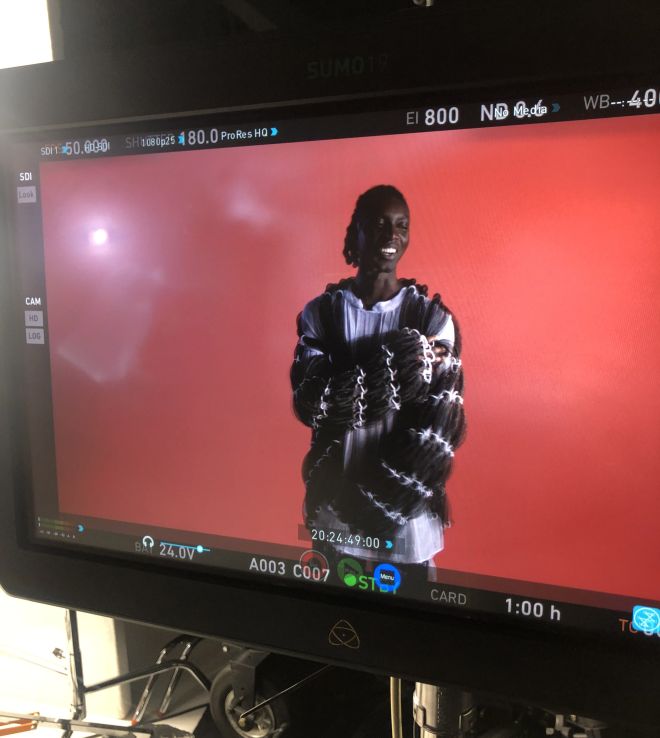 "We needed the models to have big personalities, to be comfortable moving in front of the camera." Emily Evans, stylist and creative director.The film features models wearing different garments designed by graduates, as opposed to whole looks from one designer which are typically presented on the catwalk. “This gives the feel of an editorial photoshoot and embraces the notion of gender-neutral fashion with the models wearing both womenswear and menswear,” explained Neil Adams, senior lecturer in fashion.

It also acknowledges the challenges of the Covid-19 pandemic portrayed through an emotive scene featuring two models warmly embracing.

“I wanted there to be an element of kindness and community, as a reminder of the challenges young people faced and how they came together to support one another,” stylist and creative director Emily Evans explained.

Kingston University alumnus turned cinematographer, Monika Davies, worked on the shooting of the film which was carried out in the University’s studios over a four-day period, assisted by students from the filmmaking course. She explained that she experimented with clear plastic sheets made up of plexiglass and PVC (Polyvinyl Chloride) to bounce light and create coloured shapes that contrast with the clothes. 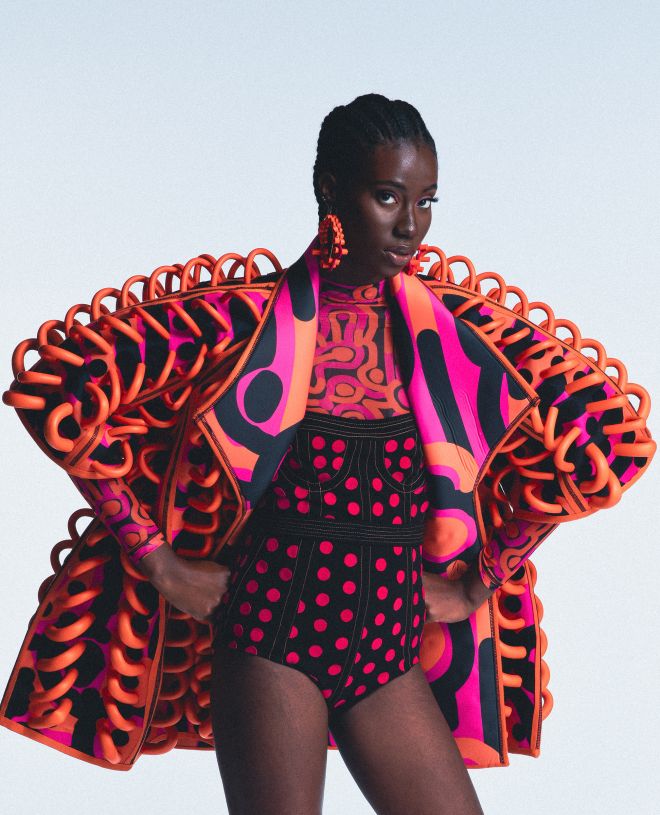 Ashnah Jones' vibrant collection is made out of recycled hair rollers which she pinned to the scuba fabric using gorilla glue One of the student collections featured in the film is by Ashnah Jones who created colourful garments which can be worn and played with at the same time. The international student used recycled hair rollers and scuba fabric to create statement pieces which, like the film, explore the psychological effects clothing can have on an individual.

“I wanted to make pieces that could help elevate the wearer’s mood and boost their confidence. They can style them in different ways, but the idea is that the garments give people that pick-me-up they need when feeling down,” Ashnah, from India, explained.

Another student who looked at how clothing can evoke different feelings is Sambi Ibanichuka, whose gender-neutral collection was inspired by her personal identity and memories of growing up in Shoreditch, East London, where street art was prevalent.

The film’s collaborative nature and creative styling have shown an innovative new direction for showcasing graduate fashion, setting the standard for other higher education institutions, Richard Sorger said. “I’m really proud of the film and everything we’ve achieved as a team. This new way of presenting can help inspire others in the industry to think outside the box and break down conventions but, most of all, I hope it acts as a launchpad for our talented class of 2021,” he added.