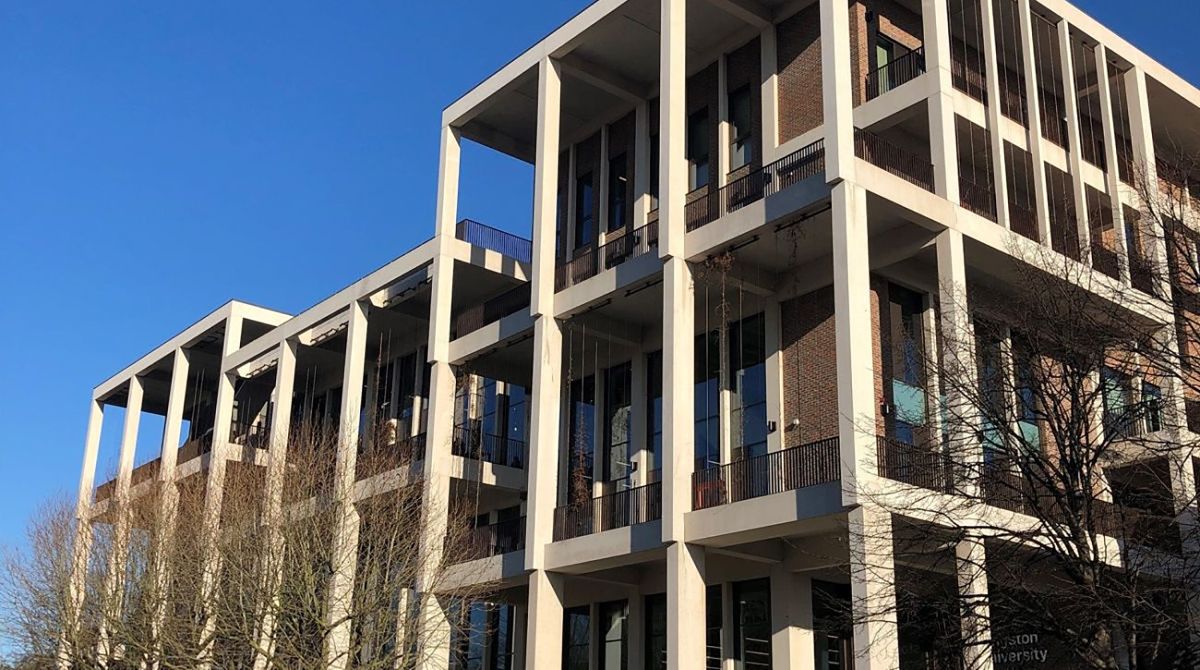 The latest recognition for Town House places the landmark building in illustrious company as one of only three UK projects ever to have won the prestigious European Union prize. Its success also marks the first time a university building has won the award and cements its international status after it carried off the coveted RIBA Stirling Prize for the United Kingdom's best new building in 2021.

It is the latest addition to an elite line up of 16 European buildings to have received the accolade since its launch in 1987, joining two previous UK winners, the Stansted Airport terminal by Foster and Partners and Nicholas Grimshaw's Waterloo International railway station.

Designed by RIBA Gold medal winning Irish practice Grafton Architects, Town House opened its doors at the University's Penrhyn Road campus in January 2020. It was conceived as part of a bold vision to create an inspirational new learning space that also acted as a gateway to the University for borough residents and businesses. Housing a three-floor academic library, archive, dance studios, a studio theatre and courtyard, the six-storey structure Town House was built by three-time Education Constructor of the Year winner Willmott Dixon Construction.

It was one of five finalists vying for this year's EU Mies van der Rohe prize, after 40 buildings demonstrating excellence in architecture were shortlisted by a jury from a list of 532 works across 41 countries built during the past two and a half years. Announcing Town House as this year's winner, the jury praised its remarkable environmental quality for creating an excellent atmosphere for studying, gathering, dancing and being together.

"The building creates an emotional experience from within and through the multi-level façade colonnade that creates a domestic atmosphere on different levels," the panel said. "It accommodates dance, library and study spaces using layers of silence and layers of sound which work perfectly well together.

"This is the first time a university building has won the architecture prize and it shows the potential of public educational projects with the quality of this one, which dignifies people’s lives through education and togetherness and gives equal educational possibilities to everybody."

The other finalists for this year's architecture prize were Catalonia's 85 Social Housing Units in Cornellà de Llobregat, Berlin's Frizz23, the Railway Farm in Paris and Z33 House for Contemporary Art, Design and Architecture in Hasselt, Belgium. The jury visited each of the projects last month ahead of making its decision.

Creating a building for its students that was recognised as not only the best in the United Kingdom, but also the European Union, was the realisation of an ambition many years in the making, Kingston University Vice-Chancellor Professor Steven Spier said.

“We know how special Town House is – what the building means to our students, staff and the wider community, how it brings everyone together and inspires all those who get to enjoy its many spaces studying and working at or visiting Kingston University,” he said. “With the award of both the RIBA Stirling Prize and now the EU Mies van der Rohe Award, Town House’s value has been recognised on a global scale.

“We’re truly delighted with the magnificent building Grafton Architects has designed for us. Across its library, dance studios, courtyard and array of spaces, students can experience a variety of ways of understanding the world, which is what a university education is about. It also softens the threshold between the University and its surroundings, inviting the community in.

“Town House stands as an inspirational demonstration of the impact great architecture can have within higher education and will be enjoyed by many generations of Kingston University students for years to come.”

Kingston University's Director of Estates and Sustainability, Sean Woulfe, said: "Our goal was to deliver a landmark building that matched our aspirations for educational innovation, community engagement and set the sustainability agenda for the institution. In Grafton we secured world class architects with the sensitivity to understand, reflect and enhance our ambitions.

"I am extremely proud that this leading European prize has been awarded to Town House, which was built with such skill by Wilmott Dixon and has been embraced by the University's students and staff alike. It is a huge statement of confidence for Kingston University and gives us a strong presence in the wider community. To have been named the winner from a shortlist of such exceptional finalists is an incredible honour for Grafton Architects, Kingston University and the borough as a whole."

The award is named after Ludwig Mies van der Rohe, a German-American architect who is one of the principal pioneers of modern architecture. One of the most famous buildings he designed, the Mies van der Rohe Pavilion in Barcelona, will serve as the venue for the final award ceremony in May.