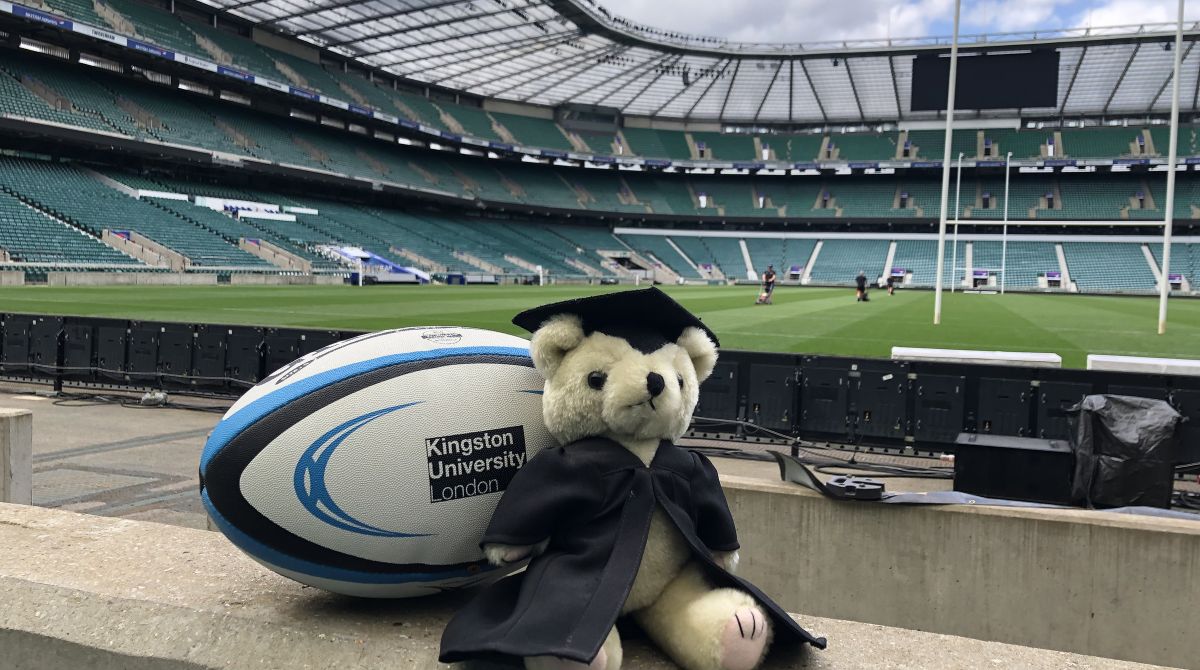 Kingston University decided to honour students who have had their graduations delayed by having a special one-off celebration at Twickenham Stadium.

Almost 5,000 graduates are gearing up to celebrate their academic achievements at the home of rugby as the first Kingston University graduation ceremonies in more than two years kick off this week at Twickenham Stadium.

The undergraduate, postgraduate and PhD students are the first in Kingston's history to have their graduation ceremonies at the venue, and will collect their awards in a suite next door to one of the most famous rugby pitches in the world, after the University decided it wanted to honour students who have had their graduations delayed in a special one-off celebration at Twickenham.

All told, 25 ceremonies will take place over the next fortnight, with students from Kingston School of Art, the Faculty of Science, Engineering and Computing, the Faculty of Health, Social Care and Education and the Faculty of Business and Social Sciences applauded for their accomplishments.

The ceremonies have been eagerly anticipated after the students, who finished their studies in 2020 and 2021, had their celebrations delayed due to the Covid-19 pandemic. They will be reunited with their former classmates and the academics who guided them through their studies, some of which were completed during periods in lockdown, when a blended learning approach saw a majority of teaching take place online.

The ceremonies will also see the University acknowledge the outstanding contributions of two honorary doctors and an honorary fellow. They include veteran politician Sir Vince Cable, the former Liberal Democrats leader who was Secretary of State for Business, Innovation and Skills and President of the Board of Trade during the Coalition Cabinet between 2010 and 2015. He will receive an honorary doctorate for his services to politics and economics. Sir Vince, served as MP for Twickenham for 20 years before retiring in 2019.

Also being applauded for her achievements is trailblazing engineer Dawn Childs, who is collecting an honorary degree in recognition of her work encouraging women to pursue careers in the sector. She was the first female engineer in several posts in the Royal Air Force (RAF) and the first woman to become Head of Engineering at a major international airport when she joined Gatwick. She has also led a multi-billion-pound transformation programme for the National Grid across both gas and electricity transmission, as well as serving as group engineering director for global theme park operator Merlin.

Award-winning illustrator, author and educator Professor John Vernon Lord is meanwhile set to join Kingston University's ranks of honorary fellows for his contribution to Kingston School of Art's internationally acclaimed Illustration Animation BA (Hons) and MA Illustration courses. Professor Lord was twice named the overall winner of the Victoria and Albert Museum Illustration Awards for his work on Aesop's Fables in 1990 and James Joyce's Ulysses in 2018. He also carried off the Redwood Burn Award for his edition of The Nonsense Verse of Edward Lear in 1984 and is well-known for his children's book The Giant Jam Sandwich, published in 1972.

Among the students graduating will be 85-year-old Martin Thomas, The Lord Thomas of Gresford, who completed a PhD entitled My Dear Hamy: Insights and Intrigues at the Court of the Caroline, Princess of Wales. It looks at the trials and tribulations of the life of Caroline of Brunswick, Queen's Consort of the United Kingdom and Hannover, who was the wife to King George IV.  A member of the House of Lords since 1996, he will address his fellow graduates after being selected to give the vote of thanks at one of the Kingston School of Art ceremonies on Tuesday 24 May.

Kingston University Vice-Chancellor Professor Steven Spier paid tribute to the graduates for all they had achieved despite having to contend with the impact of the pandemic as they completed their degrees and embarked on their careers. "Graduation is one of the highlights of the academic calendar as we applaud our students for all they have accomplished as they cross the stage," he said. "The resilience, determination and dedication they have displayed developing their knowledge and skills in the face of the pandemic makes this a particularly proud moment for our University community as we come together at the home of English rugby to celebrate such a momentous milestone in their lives."