Technology set to give traditional tie a modern-day makeover 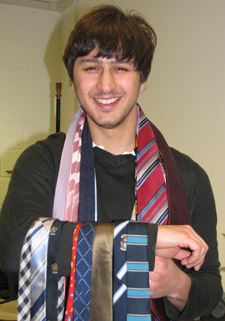 How many neckties do you own? A quarter of men have more than 50 which, in the opinion of Kingston University Masters student Coskucan Gurun, is far too many. Coskucan believes that, in the near future, they'll be able to get by with just one - a digital tie which he designed in response to a challenge from leading magazine Esquire.

"The tie of the future will be made of light emitting diodes," the 29-year-old explained. "At one end you'll have a circuit board which can change the colour and pattern of the tie.

"The circuit board will have a Bluetooth adaptor, so you can send new designs from a smartphone or laptop and change your tie whenever you want - without even having to take it off!"

Coskucan, a student on Kingston University's Design: Product and Space MA, was challenged by Esquire magazine to design something which would "make men's lives run more smoothly". After toying with a ceiling-mounted hairdryer, he decided to revolutionise the tie.

"My father, who worked in advertising, had 30 or 40 ties, all for different occasions - it was crazy," Coskucan, who's originally from Istanbul in Turkey, said. A survey by Australian management consultancy Cornerstone International has found that 28 per cent of men own more than 50 ties. "In the future, I see them needing only one tie whether they're going to a job interview, a business meeting, a wedding or a funeral," Coskucan said. 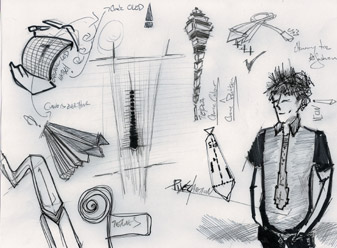 He decided to use TOLEDS - transparent, organic, light-emitting diodes - because they can display bright colours without any kind of backlighting. He says the tie will look totally realistic, but admits the first prototypes may feel slightly 'plastic'. He's even come up with an idea for a website, from which designs could be downloaded, which he has dubbed 'Tie Tunes'.

"Coskucan has done really well to complete this project alongside his coursework and receive recognition.  It's an idea that combines both technology and humour," Colin Holden, course leader of the Design: Product and Space MA, said.

Could the same technique be applied to a t-shirt so that music fans could switch allegiance by pressing a few buttons on their phones? "Yes, but it would take much longer to perfect the technology," Coskucan said. "The great thing about a tie is that it's a flat surface without complex curves or creases."

Coskucan completed his MA in September 2010 and is currently putting the final touches to the digital tie and some of the other ideas he came up with at Kingston.