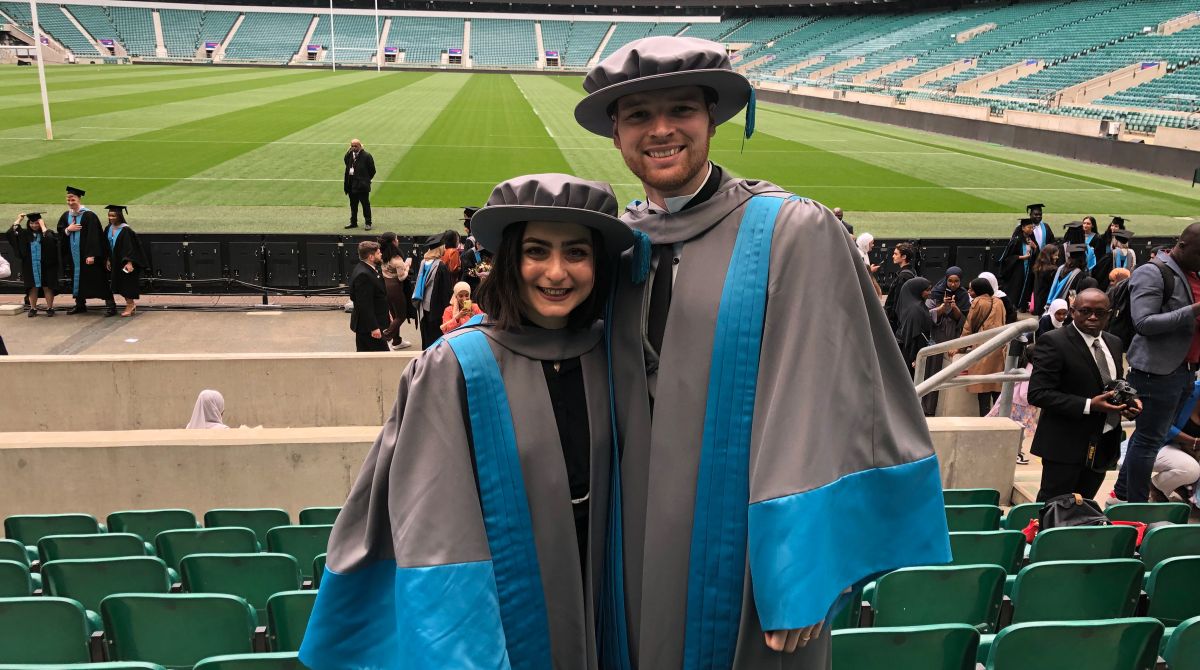 Tomris Coban and Cameron Robertson met each other in the first year of their PhDs at Kingston University.

A graduate husband and wife who realised they had a special chemistry after meeting in the first year of their Kingston University PhDs, have marked the completion of their studies crossing the stage to resounding applause in a ceremony at London's Twickenham Stadium.

Tomris Coban, 30, and Cameron Robertson, 29, from Surbiton, south west London, met in the early stages of their three-year PhD programmes after being placed in the same research group in the University's Faculty of Science, Engineering and Computing. "We found ourselves in a lot of meetings together and started to forge a friendship," Cameron recalled. However, despite having plenty in common, their relationship didn't have the smoothest start. "When Tomris invited me out for coffee I initially said no," Cameron said. "After chatting more though, we eventually went on our first date – at a bar on the River Thames and fell in love."

The couple have had good cause to reminisce about those special times after reuniting with coursemates and their academic supervisors earlier this month for their graduation ceremony, which had been delayed because of the Covid-19 pandemic.

Tomris's thesis looked at synthetic organic chemistry in relation to the treatment of cancer. Cameron, meanwhile, focused his attention on an area of analytical chemistry, looking at nuclear magnetic resonance techniques for evaluating the health of the stratum corneum, which is the outer layer of the skin.

"Cameron's very clever, has such a good heart and is very caring and friendly. He doesn't have a bad word to say about anyone," Tomris said. Cameron, on the other hand, was drawn to his wife's strong personality, drive and humour. "She's very funny and always knows how to bring a smile to people's faces. Tomris is also such a humble person despite being highly intelligent and it drove me on seeing how hard she would push herself in her studies," he said.

Born in Cyprus, Tomris moved to the United Kingdom to take up a place at Kingston University to complete a Master in Pharmaceutical Sciences in 2014 after her parents urged her to study in England. "My family always encouraged me to get a good education and being able study in the United Kingdom opened up extra opportunities for me," she said. "It was such a good experience, I was determined to stay on at Kingston University to do a PhD."

Cameron, who grew up in Edinburgh in Scotland, completed an undergraduate degree in biochemistry at the University of Kent and a Master's in neuroimaging at King's College London before furthering his studies at Kingston University.

A large part of the couple's PhD experience was affected by Covid-19, particularly impacting Tomris who wasn't able to travel to see her family for a considerable period. "My family members are all back in Cyprus and I didn't see them for two years. We were having to juggle all these emotions as well as writing our theses, preparing for our PhD vivas and trying to plan a wedding, so it was very demanding but we supported each other and came through it stronger than ever," she said.

Kingston continued to play a central part in the couple's love story when it came to them tying the knot. Their marriage took place at the Royal Borough of Kingston's Guildhall, with their wedding reception hosted in the familiar setting of the University's Picton Room refectory, where the couple  were joined by staff and lecturers who had supported them during their studies. "It was amazing people who had played such a big part in our journey at the University could be there to celebrate such a major moment in both our lives," Cameron said.

Professor Adam Le Gresley, who supervised both Tomris and Cameron during their PhDs, said he was particularly proud of the way the two had encouraged each other to achieve such a significant academic accomplishment. "I had an inkling that love was in the air as they were often together supporting each other in the laboratory when preparing for their PhDs. They both passed with flying colours and I have been extremely pleased to be able to help develop their knowledge and talents even further by employing them as postdoctoral researchers working on GlaxoSmithKline-funded projects," Professor Le Gresley said. "Both are now experienced researchers and continue to be a real credit to Kingston University. It was a proud moment, indeed, to applaud Tomris and Cameron collecting their PhD awards and see them in their graduation robes."

The couple are both keen to give something back to the University, which they credit with doing so much for them, now that they have joined its staff. "We're using what we learned in our PhDs to build relationships with industry partners that can help deliver research that is important to the University and wider society. Kingston University has done so much for us and we both want to do everything we can to acknowledge the support we received," Cameron said.